Maximo Park began this year by playing a three date mini-tour of pubs in their hometown of Newcastle, in anticipation of the release of their second album, 'Our Earthly Pleasures'. It seems apt then, that their final performance of the year, and their final show in support of that album, takes place in the rather more expansive surroundings of the city's Metroradio Arena.

Tonight's support act are not used to playing second fiddle, and there are few bands that would be brave enough to willingly follow them, but Maximo Park personally chose pop-punk legends The Buzzcocks to open for them, and from the outset it seems as if Pete Shelley and company are determined to upstage their local hosts. What is striking with this band is that although they have apparently aged physically, all of the original verve and excitement is present in abundance. We are treated tonight to a definitive greatest hits set, with 'Reconciliation' and 'Ever Fallen In Love' causing the rapidly swelling crowd to jump around with more energy than this reviewer has ever seen created by a support act. By the time the final screaming chords of 'Orgasm Addict' fade out, there is little doubt that the local boys will have a tough job following on. 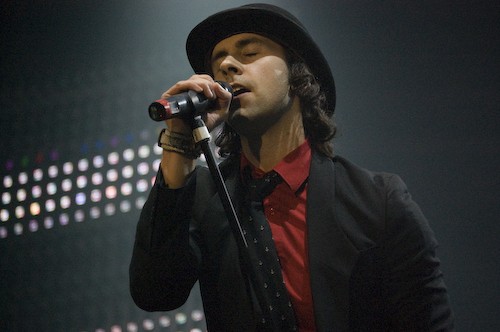 By the time Paul Smith lead his band out just after 9.30pm the Arena is packed to bursting, and the excitement in the air is tangible. Launching into the fantastic 'Girls Who Play Guitars', the band make sure they hit the ground running. Dressed in his trademark bowler hat, along with a black bolero jacket, Smith is clearly on fire, and delighted to be playing this show.

Now that they have been touring it for so long, the material from the second album no longer feels new, and each and every track feels like a crowd favourite. Current single 'Karaoke Plays', complete with the inspired addition of a string section, is gloriously understated, whilst classics 'Apply Some Pressure' and 'Graffiti' show the band at their scathing best. 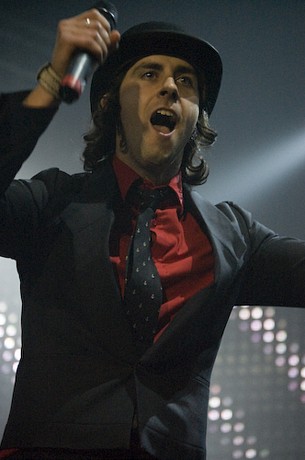 The high energy 'Limassol' is accompanied by a dazzling light show, with lasers cutting through the arena, and a giant graphic equalizer at the rear of the stage. Maximo Park aren't often noted for the standard of their stage show, but this is pure theatre, and quite simply, magnificent.

A heartbreakingly sincere take on 'Acrobat' opens the encore, and the crowd hangs on every syllable of the mostly spoken word piece. Highlighted by a static green laser, Smith takes on an ethereal quality, and the emotion he throws into this song has to be witnessed to be believed. Following that, and with time drawing on, there is really only one song left to play. As the band attack 'Gone Missing', a sense of triumph hangs in the air and as canons shower the arena in confetti, a party atmosphere envelopes the crowd, and the point, as if it was needed, is rammed home that this is where Maximo Park belong.
article by: Tommy Jackson
photos by: Tommy Jackson
published: 19/12/2007 00:09