Tonight is certainly a night of surprises. The first comes in the shape of the Dizzee Rascal, who wouldn't normally be the first name to pop up when deciding on tour support for Babyshambles, but somehow it works brilliantly. Opening with a simmering take on 'Fix Up Look Sharp', the east London grime star seems determined to win over a crowd that was for the most part sceptical at best. It is, though, impossible to deny the intensity of the set, and by the time we get to the frankly superb 'Jus' A Rascal', the crowd is well and truly on side. The abrasive 'Stand Up Tall' and upcoming single, 'Flex' provide further high points in this short but excellent set. A support act, by the very definition, should warm the crowd up for the main event, and in this respect, booking Dizzee Rascal was nothing short of inspired.

Thankfully it seems that the 'Will he turn up?' bollocks is behind Babyshambles now that Pete Doherty is approaching something like the straight and narrow, and focus seems to be moving more towards the music. The fact that new album, 'Shotters Nation' is a collection of some of the best songs released this year might help a little too. 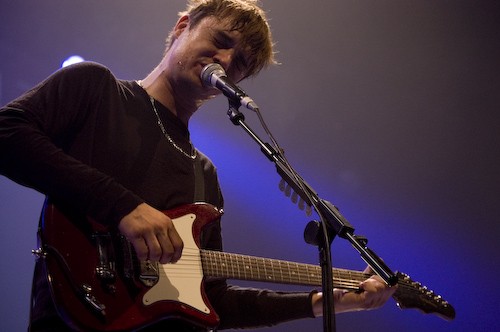 As he leads his band out smiling, Doherty looks a different man. Gone is the slouch. Gone is the self-pity. Gone is the air of self-hate. The Doherty standing on the stage tonight is vibrant, dynamic, and most of all, on form. All of a sudden I realise why Babyshambles are playing arenas on this tour. Strip away the bullsh*t and you have a band who have the power, and the talent, to invigorate a crowd even in the soulless aircraft hangars of the country.

The band open with a lurching take on 'Carry On Up The Morning' to a rapturous reception. The arena might be half empty, but the noise suggests otherwise. Given all they have been through, you might expect apathy to have set in amongst Babyshambles fans, but nothing could be further from the truth, and the band are only half the show tonight, with the action on the other side of the barrier proving to be just as compelling. Security have a job and a half tonight, and credit to them, they deal with the numbers coming over the barrier remarkably well. 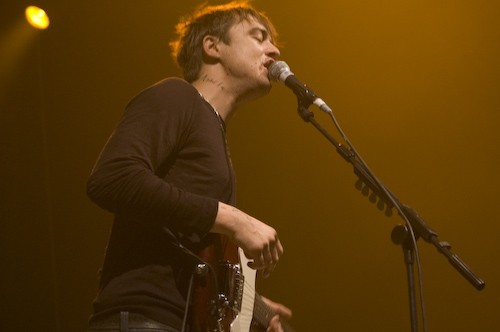 It is hard not to grant 'There She Goes' with an added sense of poignancy, give recent developments in Doherty's personal life, but regardless of the subject matter, the number is superb tonight. Doherty pours his heart into this song, and it would not be a surprise if there were a few tears around the arena. The emotion and fervour isn't just saved for this one song though. 'Delivery' is as Libertines-esque as they come, whilst 'Unstookie Titled' proves to be even better live than on record.

Material from 'Shotters Nation' makes up the majority of the set, perhaps echoing the fact that it was received much more warmly than debut 'Down In Albion', but there is still room for the highlights from the debut album. 'Killamangiro' and the caustic 'Pipedown' gets the crowd moving, whilst 'Albion' gives the crowd a chance to show of their own vocal talents. The fantastic 'F*ck Forever' is saved for the very end, and shows Doherty at his acerbic, nihilistic best.

So there you have it. Could it be that Babyshambles are starting to show their true potential? If Doherty manages to stay the course, the ending to one of the most remarkable stories in British music history could turn out to be a good one. The tabloids will be gutted, but the music lovers of the nation should rejoice. If tonight's performance is anything to go by, the future is bright for the 'Shambles.
article by: Tommy Jackson
photos by: Tommy Jackson
published: 26/11/2007 04:37