Once in a while a band comes along that really does feel like something special – a band that seems as surprised by its success as anyone else. This eccentric quintet are long time contributors to the Newcastle music scene (two of them play in Richard Dawson’s folk band) and must be quietly bewildered to receive so much notoriety for a side project that might, or might not, be some sort of heavy metal art project. Pigs Pigs Pigs Pigs Pigs Pigs Pigs have been variously described as stoner, sludge, psych, doom and metal and that’s probably because their sound is really hard to pin down. In the spirit of full disclosure I feel I should admit that I knew practically nothing about them before turning up at the bijou, and predictably sold out, Waterfront Studio. Sandwiched in the lexicon of daft names somewhere between Gorky's Zygotic Mynci and Scraping Foetus off the Wheel I would have been drawn to them solely on the strength of their preposterous moniker, but in any case I’d been instructed by a drunk bloke called Stuart at last weeks Idles gig, that I really, really needed to go see this band. 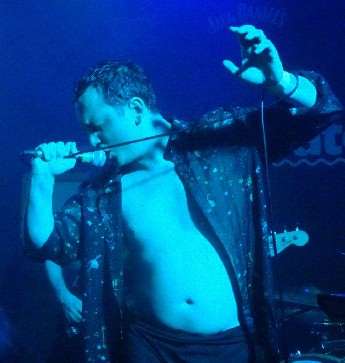 It turned out Stuart knows a thing or two, but I can’t imagine even he was quite prepared for support band Kulk. Consisting of Thom on guitar and Jade Ashleigh on drums it is inevitable, if lazy, that comparisons are made with the White Stripes, but this duo are altogether more visceral, exciting and straightforwardly interesting. Wild-haired Thom thrashed away with abandon in clear contravention of Health and Safety regulations, while elfin Ashleigh defied all expectations by smashing the bejesus out of her kit. There’s a lot of shouting from Thom, which rarely coalesces into anything resembling a tune, but he’s a fantastic performer that has the swelling crowd slack jawed in amazement at his stage antics. They were half way through their set before garnering much applause, but not through lack of appreciation – we just didn’t know what had hit us. Along the way there was a cover of Iggy Pop’s I Wanna be Your Dog, for those in the audience that needed a musical life raft, but for the most part this was just one long glorious racket, as liberating as it was bonkers. When Thom leapt over the stage barrier, guitar in hand, you kind of expected he would finish by hurling his expensive musical instrument dismissively across the room, but I wasn’t ready for him picking up his amp and chucking that overboard too.

While waiting for the headliners to do so, I got talking to a fellow that had only just seen them in London, had come to Norwich just for the gig, and had already put next week’s Preston date in his diary. What is it about this band, I wondered, that inspired such devotion? The answer quickly arrived in the opening assault of GNT off of the new Kings of Cowards album. I’d been led to expect a sound reminiscent of Black Sabbath or Motorhead, but while there was something of the seventies about the band’s sound, I thought it much closer to early Hawkwind or Acid Mother Temple. John-Michael Hedley’s relentless bass lines do bring to mind those of Geezer Butler, but so do a lot of bass lines. What really sets them apart was a soaring space rock wall of sound that made the toughest of souls in the audience question their no-earplugs policy. Central to that noise were the ambient synthesised tweaks provided by Matt Baty, a man usually found behind a drum kit, who also offered up his own distinctive take on vocals – a growling, shrieking nightmarish sound that defied any attempts to understand what was being said. A pity, in some respects, as I’m guessing this droll and hugely personable fellow had all sorts of interesting things to tell us.

“Every time we sell out a gig,” he said, with real feeling, “it makes us feel like proper pop stars.” 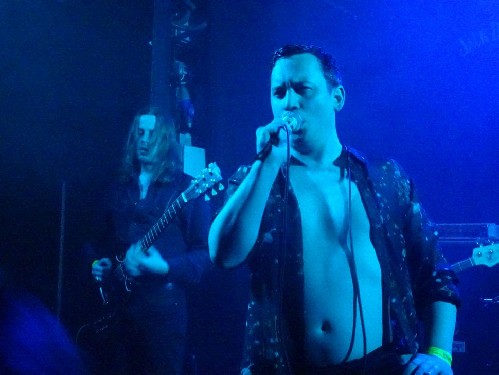 He’s a man who has been described as anything from Danny de Vito to a deranged penguin, which seems a bit rude to me (if pushed, I’d go for a slimmed down Peter Kay) but he’s certainly an atypical frontman. Wearing shorts and (by the end of the evening) little else, he’s an admittedly portly chap, but has a mesmerising stage presence, with a predilection for striking messianic poses that was swiftly undercut by mocking self-deprecation.

“This one’s about cake.”

Whether it was or not, I really couldn’t say, and nor could I really work out much else that was played. Presumably it was a selection off of their two albums, but in any event, it was barely an hour before they made their excuses and left. Bands have appeared for longer, and left me feeling short changed, but this felt about right. Exhausting, astonishing and exhilarating, the band, drenched in sweat had given their all, and left at just the right time. They were bloody marvellous.