'The Ultimate Collection Tour' drove in to town (Birmingham) today and boy was I excited.

To say I love American Powerhouse Anastacia is a bit of an understatement, I've loved this woman ever since seeing her at the Genting Arena on her 'Anastacia' album tour. Six rows from the front with my Dad in tow, whom I may add, was totally in ore with his mouth open wide in complete amazement at Ana's voice. I was hooked after this and I've never looked back.

Tonight was the celebration of the release of the 'Ultimate Collection' album, basically the greatest hits, I'm actually pleased the show has come to Birmingham cause the last few tours it's just been London, which slightly peeves me off, not everyone loves London and what is has to offer and unfortunately I'm not a lover of London, so yeah, I've missed out.  Totally gutted, last time I saw Anastacia was at Manchester Pride and she was mind blowingly brilliant that night, so hopefully tonight was gonna be that good again.

Anastacia, she's like marmite, you either love her to bits or I guess you don't.  My wife and I have differing opinions, we both admire the woman to bits, especially after the trials and tribulations she's been through, she's got balls and sass and I totally love that, she loves her fans, which is a rarity in the music business nowadays, and she's still sexy in her forties and oozes talent, what's not to like?.  I could go on for ever but then this review would be a kissing ass exercise (lol).

I loved the last album 'Resurrection'; it was Anastacia back to her best, epic songs, meaningful lyrics and the amazing powerhouse of a voice.  I haven't a clue why release another greatest hits album, but I'm not complaining because it means I get to hear and see her in the flesh tonight. 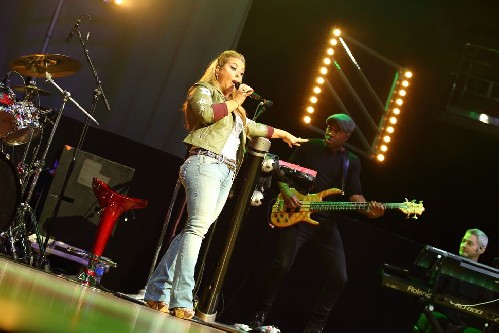 Tonight's gig is at Symphony Hall, one of my favourite venues in Birmingham.  It's an epic venue if you're seeing one of your favourite artists, as the acoustics are mind blowing.

The gig tonight is number two of six gigs in the UK and Ireland. Merchandise for the show was actually reasonable, t-shirts at £20 and programmes at £15, I guess any fan would love either in their collection!

The show kicked off at 8.30pm, Anastacia looking rather hot, as usual.  In tight diamante studded jeans, sandals, long sleeved top and bomber jacket. 'Army of Me' kicked off the show and what a start it was too.  I'd forgotten how powerful her voice was.  Tonight just reinforced how much I love this woman.  I never tire of hearing her voice and she has so much passion and verve on stage and for life.

The stonker 'Sick and Tired' bellowed around the hall followed up by 'Stupid Little Things', one of my favourites off the 'Resurrection' album.  It was obvious Anastacia could do no wrong tonight, she mentioned she'd had a meet and greet before the show and met a few 'Brummies', she said she thought it was "Burmese".  The chat was welcomed by all the fans and paved the way for bits of chat between songs, some quite funny bits.  I've always thought Anastacia has an amazing outlook on life, she can laugh and is always joking about but has a serious side, thanking fans for sticking with her and supporting her, and allowing her to do what she loves most.

Fan Favourites 'Paid My Dues' and 'Welcome to My Truth' were both totally awesome, I loved it.

Backed by an amazing band there were no bounds for Anastacia, every song was a masterpiece, the section in the show where she sings with lead Guitarist DeeRal was exceptional and showed the powerhouse's versatility, her voice is absolutely breath-taking, 'Everything Burns' had the goose pimples on my neck come out in force.

Each band member and backing singer was given the spot light for a short while, where Miss Anastacia introduced them.  Four costume changes throughout the show, Anastacia looked stunning, even my wife commented on her figure and how amazing she looks for her age., she's right, wives always are!

The two songs that stood out for me last night were 'You'll Never Be Alone', always makes me cry cause the lyrics mean so much to the special person in your life.  Anastacia said it's a song she dedicated to her Fanily, but which they dedicated back to her after all her health problems.  I loved the sentiment; it made the song even more special.

Throughout the tour vans have been given a choice on the Anastacia App of three songs and Anastacia would sing the one with the most votes.  Tonight that was 'Underground Army'.  My Absolute favourite.  This song has special meaning to me as it's the song I loved when I went with my dad to see Anastacia on her Anastacia tour and its one of the first songs I put on a CD for my then future wife.  My wife whispered she knew all the words, make me a bit choked.  Anastacia singing that song made my night; it's the first time I've ever heard it live and it bought a few tears to my eyes, very, very special moment for me and my wife.

Obviously the absolute stonkers were left for the end of the show and the encore, it was party time and everyone ran to the front, Anastacia obliged with handshakes and signing stuff.  The last four songs were amazing, shake your booty time.  Everyone was on their feet, at last, and it was an absolute riot. 'Not That Kind', 'I'm Outta Love', 'Left Outside Alone' and 'One Day In Your Life', How epic was this show?

I went home with a massive smile like a Cheshire cat on my face, even my wife was complementary to Anastacia (lol), a 90 minute rollercoaster of epic proportions, Anastacia you are one talented lady and one helluva person, don't change for anything.

If you don't catch Anastacia on this tour, well, you are absolutely mental! 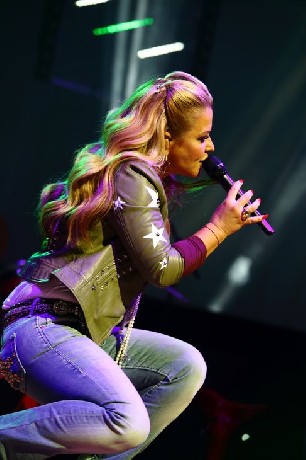