Public Service Broadcasting (PSB) began transmitting in 2010 as a collaboration between J.Willgoose, Esq (Samples, guitar) and Wrigglesworth (Drums). What they concocted was a seamless blend of funk and electronica interspersed with voice samples from public information films and other historic broadcasts. They formally introduced themselves in 2013 with the arrival of debut album 'Inform-Educate-Entertain'. The questions was, could they sustain this unique approach to music and writing?Or would it prove to be of passing interest to the fickle? The release of their second long-player 2015's 'The Race for Space' proved the London duo were nimble enough to consolidate and build upon what they had already achieved. After a busy festival season, tonight they find themselves returning to Cardiff at the start of their first major headline tour. 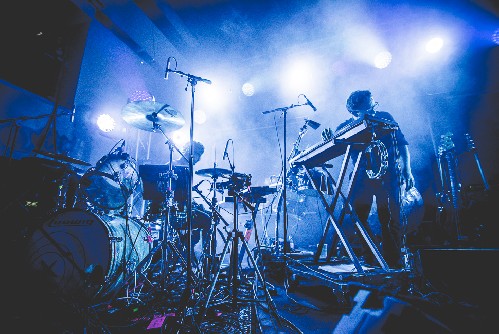 A stroke of genius is the short animation played on screen just before the gig starts. It's basically about the horrors that befall a fictitious cartoon character who is shunned by one and all as a result of his anti-social behaviour filming an entire show on his smartphone. His eventual demise is greeted with mass applause.

As PSB take to the stage (unless my mathematics has failed me) the duo have doubled. No doubt to meet the challenges of reproducing the complexities of their recordings in a live environment. Needless to say, they all look the part in a geeky chickinda way. A rip-roaring 'Signal 30' is dispatched early in the set thus taking the audience into the palms of their hands. As anyone who has seen PSB live will already know, the band quite entertainingly use voice samples as banter between songs. We get everything from a "hello Cardiff" to lots of "simmer down" which is delivered in jest. As is to be expected, and as the set moves along we hear offerings from their latest album. All are warmly received from the brooding 'Sputnik' to the charging 'Go' prompting a "sing-along". The pace quickens further with a rampant 'Spitfire', it's at moments like this they seem untouchable. I don't know if it's intentional, but it's multi-instrumentalist JJ Adams who steals the show with his gregarious performance looking like he is loving (and savouring) every moment. 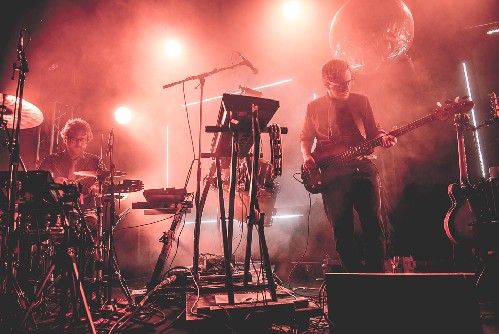 As is customary with most live acts, after a brief interlude we welcome PSB back to the stage for an encore. As commonplace as encores are, this one feels a very appropriate gesture by the band for all the support the fans have given tonight. PSB ranks swell once more as they are joined by a 3-man brass section to fire up 'Gagarin' where I suddenly find myself in the midst of what can best be described as a funkadellic party. It's a simply joyous moment, and adding to the exuberance on-stage is a dancing astronaut with some very fierce moves! It's clear that I, the audience and PSB are all on the same frequency. What is also apparent is that Public Service Broadcasting exist in a universe of infinite possibilities, and I look forward to exploring each and every one of them.