The Bleedin' Noses, or just The Noses as they are now known, are a South Wales band bringing us the sound of South North America. Only on their second album, 'Even If Your Voice Shakes', these guys come across as true music veterans, such is their stage presence and musicianship. They are a truly tight band, with many instruments involved; mandolins, banjos, keyboards plus the normal band set up. They do not have one genre, some call them country punk, some say vicious skiffle, in two songs I hear indie like Franz Ferdinand and then rock n roll like Tenacious D. There's folk and Americana, punk and country. No one song is the same, and I applaud them for it. As do many of the crowd. They have the live energy, powerful song writing and a great friendly attitude. Lovely bunch, check them out.

The Meat Puppets are however onto their fifteen album. Formed in January 1980, the brothers Cris and Curt Kirkwood have, apart from a couple of break ups in 1996 and 2006, been playing together and touring since. Shandon Sahm replaced Derrick Bostrom on drums in 2000 and 2010, and Curt's son Elmo Kirkwood joins the on tour on rhythm guitar. Yes there's a lot of curly hair front row with a line of Kirkwoods!

There's songs from across the years here, from 1985s 'Up On The Sun' with the instrumental 'Seal Whales', 1991s 'Forbidden Places' with 'Sam', 1994s 'Too High To Die' with 'Backwater', and many more tracks. The majority come from fan favourite Meat Puppets II from 1984. The instrumental 'Aurora Borealis' sits nicely with the ones many of the grunge world know from their appearance on Nirvana's MTV Unplugged; 'Oh Me', 'Plateau' (both early on in the set) and 'Lake Of Fire'. My favourite 'Lost' is also up, and reminds people of the fun sound to this hit album, even if it was nearly ten years before people discovered it. 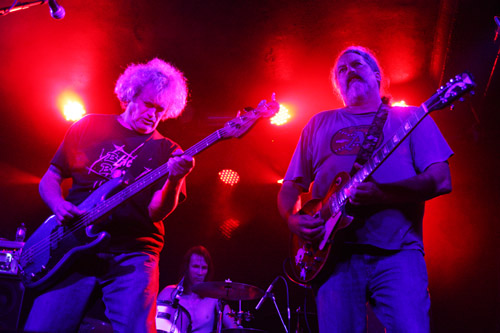 Bringing their own covers into the night, the band also play 'Before The Next Teardrop Falls' by Freddy Fender, 'Cathy's Clown' by The Everly Brothers (in their own way) and a regular at their shows, the Beach Boys 'Sloop John B'.

The Meat Puppets are not one to be pigeonholed, but the main gist of their music encases country punk ("cow punk" is a great term) with psychedelic detours. 'Lake Of Fire' is only one song during the evening where, because Elmo is on rhythm duties, Curt can go off with his pedals and endlessly solo, somewhat like J Mascis (a huge fan of theirs), while Shandon keeps the varying pace of beat and Cris plays his own intricate bass riffs. Add that to the huge strobe light and at times this gig feels well trippy. Then it's back to some country with Curt's warbling vocals like on 'Up On The Sun', and grunge with songs like 'Backwater' and the rock n roll of 'Sam'. It all should be very muddled, especially considering how they are on stage, not coming across as too together and just going for it, but it is as tight as. That's experience for ya. 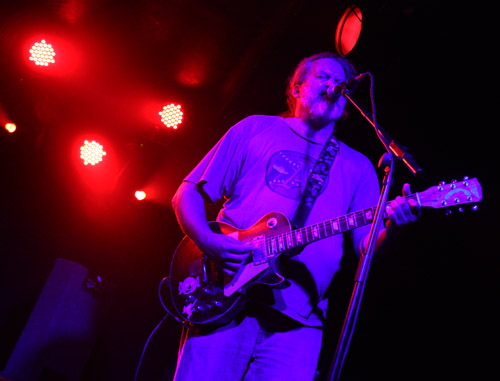