What a line up! For anyone attached to the Fat Wreck Chords led skate punk scene of the nineties, this is one dream line up. This is the extra date added to accommodate demand, tomorrow hosts a sold out show with NOFX guitarist Melv controlling the decks after the main show, so tonight to vary and also equalize it there is the promise of the two main bands playing two of their best albums in their entirety; NOFX will play 'Punk In Drublic' and Alkaline Trio will play 'From Here To Infirmary' in full. The main reason I am here though is for Lagwagon, who along with Propagandhi were to me one of the most technically skilled fast skate punk bands of their time. 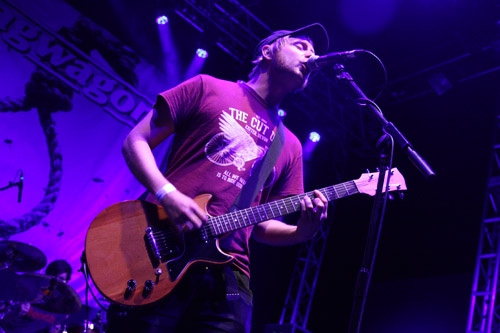 There is also another band to start the proceedings, The Spoilers are the only British band on the bill and start at 6.30pm (the doors opened at 6pm to cram it all in). They have the harmonies, punk banter and stage presence, but their songs to me sound a little samey. Maybe it's the bad quality of sound in a near empty venue too, but the quality sounds sharp (on the ears, not tight like). 'Lucky Winner' is an ok track. They say their bass player is the bass player from Slade. I believe he may be a doppelganger tis all. 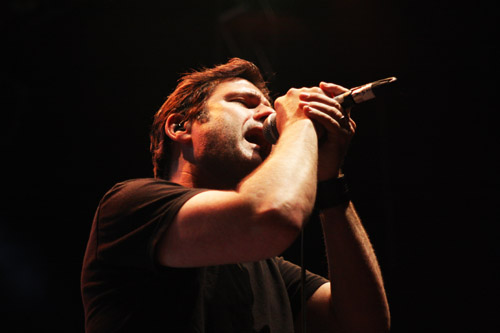 Lagwagon are on at the sober time of 7.15pm, coming on stage to a cover of The A Team theme tune. I would much rather they swap the bill with Trio, and they would much rather have a more intoxicated crowd. They do play the hits though, Joey Cape is on fire with the crowd, Joe Raposo is like a wound up spring has been let off, Chris Rest and David Raun power out the riffs and beats, and the giant Chris Flippin is as engaging as ever. They power through their set, cramming in 14 songs in the short time they have. Joey played a solo show in Huddersfield last night to a sweaty crowd in the small Parish venue, and tonight plays part of one of his solo songs, before returning the guitar (which looks like a Les Paul Jr size on him) to Flippin, where it then looks like a child sized guitar. Stand out tracks are 'Mr. Coffee', 'May 16th', 'Razor Burn' and 'Know It All'. Awesome stuff, but should have been a little later in the day. Still not complaining! 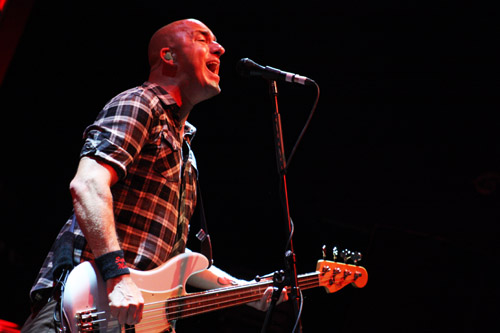 Alkaline Trio are up next, and many people are highly anticipating hearing their third album all the way through. Songs like 'Bloodied Up' and 'Private Eye' are coming soon we think, but instead the band play a lot of new tracks and don't touch upon that album expect for 'Stupid Kid'. 'Crimson' tracks feature heavily. 'This Addiction' is a great track, though Matt Skiba is not hitting all the high notes, and Dan Andriano does a good job taking on half the vocal duties. I do not like the fact that Skiba is wearing his own baseball jacket from the merch stall; it's warm in here so it's definitely plugging it. I mean it's a nice jacket, but I have a thing about not wearing a T-shirt of a band to a gig they are playing at, and find it very sad if a band member wears their own band merch on stage. There's no banter from the band, just playing through songs I'm somewhat disappointed with Trio for their unfilled promise (as are other people I chat to outside). Lagwagon should have had this slot.

No fear though, as NOFX are here! There are guitar issues to start with, as both Eric Melvin and Aaron 'El Hefe' Abeyta's guitars have no sound. There's time then for Fat Mike and El Hefe to make up a quite unPC song to the fill the time. They do not start with 'Punk in Drublic', and ask people what they would like to hear. They do however play 'Punk In Drublic', maybe not all of it as said, but most of it. Fat Mike struggles with singing some tunes it now transpires, hence why they never play a lot of it. El Hefe is an awesome singer in his own right, proven in tracks like 'Eat The Meek'. Of the Punk In Drublic tracks the usual stand out: 'Linoleum', 'Leave It Alone', 'Don't Call Me White', 'The Brews' well most of it! 'Murder The Government' and 'Kill All The White Man' come up as do a load of other NOFX hits. 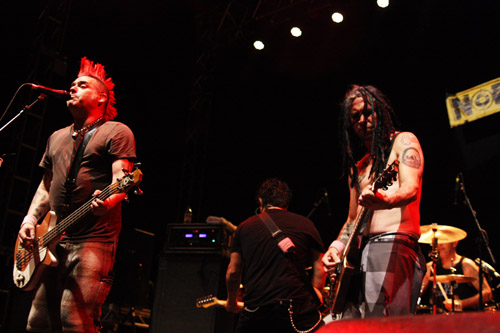 The show is as ramshackle as always, with Fat Mike throwing radishes about ("They say do not eat them raw How the fuck do you cook radishes?"), lots of talking (They say they have played for 30 minutes and talked for 1 hour 30 minutes during the show!) and talking about doing drugs and drinking booze. The tiny backdrop is a running gag. Despite what some people unfamiliar with the band may call dilly dallying, the band have some of the catchiest punk songs, with structured if simple melodies and spot on harmonies that stand the test of time people are here singing the songs as though its 1994.