Me First and the Gimme Gimmes / The Skints / Capdown / Animal Music

The Jagermeister Tour is back in town and warming up Leeds on this weekend before Christmas. Nowt like a load of covers played in the best way possible (punk of course!) to dance to on a Saturday night. Unfortunately for the first band, Animal Music, their set of dance music was not sitting well with the punks who had turned up early (doors were at 6pm to allow for the club night and early curfew after the gig). I don't know whose idea it was to put them on a bill with punk, ska and dub but I felt really sorry for them, and others I overheard did too. No amount of rallying was going to make this crowd move, but they tried to the very end. Good on 'em. 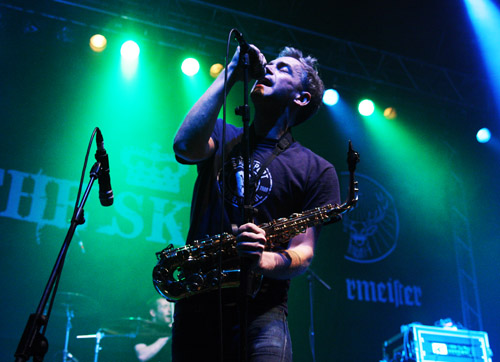 Capdown are more the crowd's sort of thing. The place is suddenly very full, and the band that have reformed for this (they to be fair have reformed many times since they called it a day in 2007). The ska band from Milton Keynes play a mixture of songs from across their three studio albums, starting with 'Unite To Progress' an ending with 'Home Is Where The Start Is'. Also in there are 'Cousin Cleotis', 'The Neverlution' and 'Ska Wars'. Let's hope this is not the last time they reform as the world needs a Capdown! 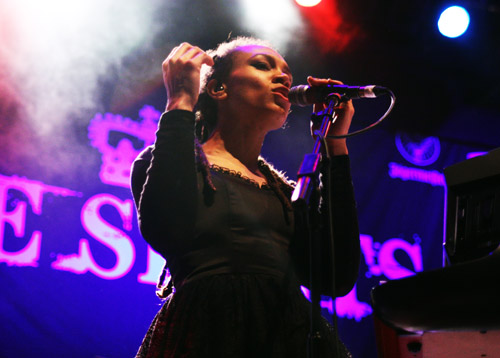 I am uncertain how I have managed to miss The Skints for so long. Having supported The King Blues, Reel Big fish, The Slackers and Less Than Jake to name but a few huge ska bands, the London band have been mixing punk, reggae, dub and ska since 2008. 'Rubadub', 'Ratatat', 'Cost Of Living', 'Mindless' and a cover of Katy B's 'On A Mission' are amongst the songs these talented Southerners provide. Guitarist Joshua Waters Ridge rallies the crowd up as multi-instrumentalist Marcia Richards plays the keyboards, melodica, drum pads it's like "What instrument has she got now?" - "Look it's a flute!" All while providing pitch perfect vocals. Will definitely be keeping an ear out for these.

There's no doubt that people here are here for the next band. It's not every day you get to see members of Foo Fighters, Lagwagon, Bad Religion and Swinging Utters play on one stage. The punk rock supergroup of Me First and the Gimme Gimmes are here to play fast covers of songs your parents and older siblings know. I in fact learnt many words to the likes of 'Me and Julio Down By The Schoolyard' well before I heard Paul Simon play it, thanks to these Californians.

The shame with these Jagermeister tours is that the main band only have an hour set. Mind you with the speed of their style they easily fit in 18 songs into those 60 minutes. From the start of John Denver's 'Leaving On A Jet Plane' to 'I Will Survive' by Gloria Gayner it's a whirlwind of people spitting out the chorus' to songs long forgotten. My favourites, apart from anything on debut album 'Have A Ball', are 'Jolene' by Dolly Parton, 'Karma Chameleon' by Culture Club and their timely cover of Slade's 'Merry Christmas Everybody'. 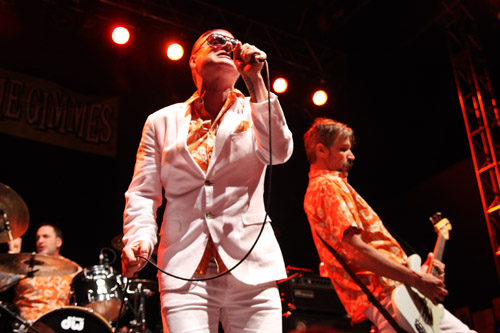 Spike Slawson does most of the talking and all of the singing, which for the range of songs is no mean feat! He dons a white suit while the others wear matching orange Hawaiian shirts. So smart. There is an interlude where Slawson treats us to some songs on the Ukulele, under the guise of Uke-Hunt (steady). Just adds to the comedy of these truly talented punk beings. The hour is soon up and the Christmas jumper wearing souls who have been taking advantage of 2-pint cups and jager shots get to maybe just make that last bus home.

Merry Xmas Everybody (Slade)
Rocket Man (I Think It's Going to Be a Long, Long Time) (Elton John)
Sloop John B (The Beach Boys)
I Will Survive (Gloria Gaynor)