On the night most birds would do anything but fly in the night sky as its being bombarded with colourful loud sparks of fire, the Counting Crows of California are playing to a packed out venue in Leeds. Both stalls and the balcony are full of people of multiple ages, all there enjoying the same music from the Berkeley seven piece.

The venue is also packed to the rafters for support act Lucy Rose. Now a seven piece is going to have a fair bit of equipment on stage, and Lucy has her fair share of kit too, so it looks mighty busy on there from our view up on the balcony. Keyboards, drums, guitars with Lucy playing an array of gear herself. Note perfect, this slight young girl produces soft vocals over dancey beats, and it is all very catchy. We only catch the last three songs having frequented the huge fireworks display up the road near the University (be rude not to), but they are enough to ensure that I and the rest of this packed crowd will not forget her name. We catch 'Lines', one of her well known songs. There's a shout of "We love you!" to which she replies "I love you too". Very sweet.

As Bill Withers song 'Lean On Me' fills the room from the PA, we know the show is about to start. Now don't go expecting to recognise a song straight away until the lyrics come in the song could be anything. Such is the way this band play, take their VH1 live album, every song on that was a reworked masterpiece of their original classics. Sheer brilliance. Now their live songs are again mostly reworkings of their classics, with the lyrics mainly intact but the music tipped on its head. 'Round Here' retains parts of its originality as the first song, but doesn't stay that way for long. I personally like this method, some don't and want to sing along to how it was, but tonight everyone appears to love it. Old and young, the crowd sways with the band. A mean looking brute of a man stands tall in the middle of the stalls, and I can see him singing back every word with every inch of his being. Go on fellow concert inhabitant! Here is a band that you and your folks and their folks can all like. 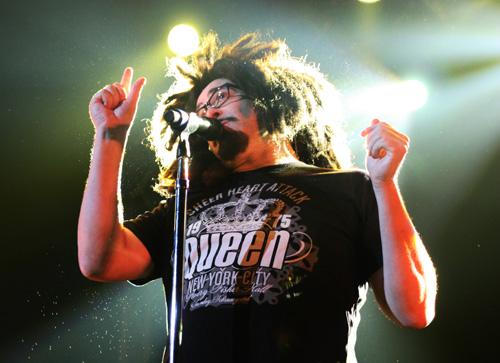 Singer Adam Duritz is in great form, telling us funny stories of working in a video store and stealing beer, and of their friend Kasey Anderson who is nearly out of jail (they don't say what for) who they dedicate a cover of his own song 'Like Teenage Gravity' to. 'Hard Candy' tracks feature a lot in tonight's set, but there is something from all of their seven albums. Crowd favourites are 'Mrs Potters Lullaby', 'Earthquake Driver' and a cover of Joni Mitchell's 'Big Yellow Taxi'. Personal favourites for me are mostly the debut album tracks, with 'Murder Of One' and 'Omaha' up there. 'A Long December' with its spotlight on Duritz's piano beginning is brilliant. 'Rain King' is always a great crowd song; however they play it, original or completely different. The band finish with 'Holiday in Spain', which I imagine most of us want as we hit the freezing night air doused in bonfire fog after a great show. 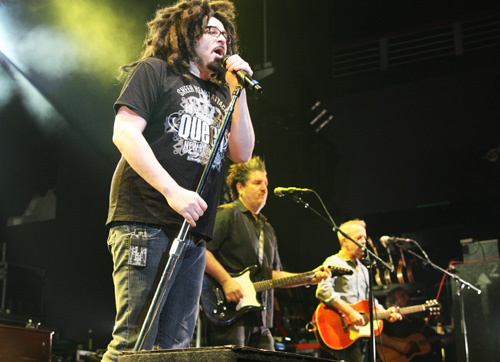