It's Saturday, It's St David's day and I find myself in what is fast becoming one of my favourite live music venues in Cardiff. Tonight it's the launch party of Fjords' new single 'Polymath'. Formed in 2011, theses local lads (and one lass) have already piqued the interest of the music establishment. They have cut their "live" teeth playing many of Cardiff's venues since; however this is the first time I have had the opportunity to see what many have been talking about. Musically they are very much in the indie/electronic camp with hints of Joy Division, New Order, Human League and nods to Everything Everything, Arcade Fire & The Horrors.

For me, their name and music conjures up images of wide open spaces and electronic soundscapes, all beautifully framed and detached. As I wait for them to take to the stage in a packed room, I wonder how well (if at all) this will translate live. As they take their positions, they all look pretty dapper and its refreshing not to see any plaid shirts or "hipster" attire! As it St David's Day, they have lined the stage with Daffodils and discreetly wear one each as button holes. As they open with 'Sulwyn' a projector screen is lowered behind them, and we are treated to a host of visual images which perfectly accompanies the musical landscape they inhibit and create. As Sonny Dagur begins to sing, the first thing I notice is a very distinct style, almost in parts reminiscent of Robert Smith (The Cure). With the rich tapestry of sounds they create, some vocalists would be adrift but thankfully Sonny doesn't have this problem.

They charge through a spirited 'Neon' with bassist Alex Mann providing an extra vocal kick. Things quieten down for 'Arcadia' with Sonny's vocals soaring over the bleak beauty of the arrangement. Sometimes less is truly more.

So far so very good, however it's when they come to previous double 'A' side single 'Domino' and 'Strata Florida' I witness a very different Fjords. Sonny leaping onto amps, Alex throwing his bass around whilst also delivering vocals to within an inch of his life! Meanwhile Scott Bradburn is hunched over furiously thrashing his guitar. All this would mean nothing without Hannah Mathias on drums setting the pace and daring the rest of the band to keep up! 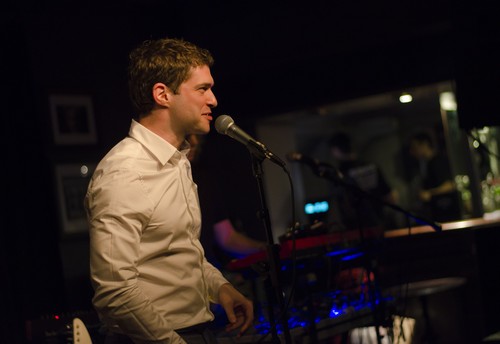 Whilst all this mayhem ensues, Gareth Bodman (keyboards) remains composed as he seamlessly switches angles and positions playing between two synths.

I should point out that at this stage that the crowd have clearly succumbed to Fjords as they let loose of any inhibitions they may have had. The new single 'Polymath' follows, which ups the ante further. Before I know it, it's the end of the show and the crowd are very vocal in their insistence for more! Of which Fjords have no choice but to oblige.

In a world of vanilla troubadours, earnest singer/songwriters and landfill indie, it's refreshing to see a band as diverse and unafraid as Fjords are, buck the trend. 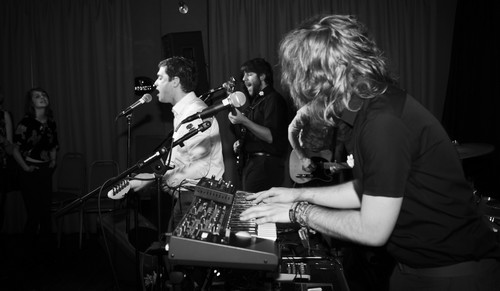