3 parts Swedish, 1 part English - Francobollo pay a welcome visit to the Welsh capital. Following in the wake of other Swedish exports such as Abba, The Hives, The Cardigans and erm.Ace of Base; the now UK based Francobollo have a new single 'We're Going To Rio' to shout about. The Four Bars venue (upstairs above the well established Dempseys) is a relatively recent addition to Cardiff's pix "n" mix of live music venues. It has a real "diy" feel to it, which makes you almost feel you are watching gigs in the comfort of your own living room.

Opening proceedings this Thursday night is John Mouse. Who's brand of lo-fi acoustic music (think Beck with a Welsh accent) gives us no choice but to sit up and take notice.

The performance, sometimes delicate, sometimes more frenetic and powerful highlights his versatility, 'Got You Shaking Your Head (Like David Gray)' ending in triumphant style. However, not before running around the venue giving each and everyone of us a 'high-five'. This is the joy of intimate gigs where the line between audience and artist blur.

The Adelines (named after their next door neighbours cat) assert themselves perfectly as the main support with guitar-driven pop indulgence echoing early nineties indie pop merchants The Darling Buds and The Primitives. The audience treated to a short, but none the less impressive introduction to their world of blissed out elegance. Whoever said bass players are not performers clearly has not seen Eddie Russell. He encapsulates the shapes, spirit and vigour of the most outlandish lead guitarists! Russell throwing his bass the floor during the last bars of 'Alleyways' signalling the end of the set, leaving us the right side of wanting more.

Now onto the our Swedish guests. If Francobollo were nervous, they didn't show it. Exuding the confidence of bands 10 times their size, despite the low turnout they began with a frenzy of fuzzy guitars, demonic drumming with Simon Nilssons & Petter Grevilius vocals fused perfectly to show what can be accomplished with voice, drum, and guitars. Nothing seems to faze Francobollo, as they stomp & tear through a set of carefully constructed, and at times complex songs losing much clothing (and shoes) in the process! Much like John Mouse earlier, they playfully leave the 'stage' and head into the audience for sections of the show, meaning tonight, we are all part of their rock 'n' roll show! 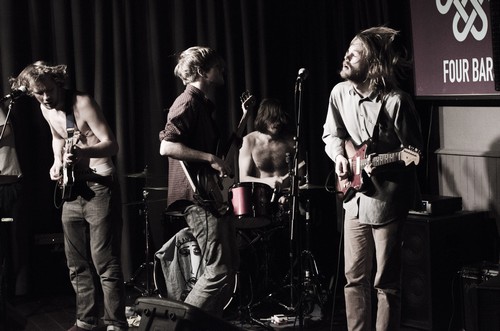 Often reminiscent of Pavement with flashes of Nirvana, they are carving out their own identity. They leave us no choice but to give in to their raucous call. It's thanks to local promoters (Fizzi Events) that are willing to put so much time and effort in bringing these bands to our attention. Without which where would the next Nirvana, Artic Monkeys etc come from?

As their time with us draws to a close, they bring out some of their big guns, recent singles 'Basketball', and 'Were Going To Rio' finds them in comfortable territory, seemingly relishing what they are doing without contrivance or care. The privileged few who here tonight are the lucky ones, who were spoilt with an abundance of riches. It's just a shame that that the rest of Cardiff didn't appear to notice.