The support for tonight was billed as Lady Leshurr. Now looking at the stage at the guy spinning hip hop tunes, I think this may have changed. The unknown DJ plays a host of well known tunes like Cypress Hill and Public Enemy to rally the crowd, and tries to get them to join in with chanting and singing, but there are not many in attendance at first. Plus one of his decks are too loud, so any scratching he does is far too unbalanced.

It was also down as an earlier curfew on the Facebook page, but Jurassic 5 hit the stage around 9pm and play until nearly 11pm. The huge makeshift deck and record featuring the J5 logo are uncovered before they take to the stage, but it has been uncovered throughout the last DJs set, so the point of this is a bit strange. Either side of the large record are deck setups, one for DJ Nu-Mark and one for Cut Chemist.

There's a few Prince tracks belted over the system until just after 'Let's Go Crazy' when the Jurassic 5 (well, 6) jump on stage. The venue is packed out now, ready for the hip hop legends that haven't played these shores in around seven years since their hiatus.

"Taking four MCs and make them sound like one" from the track 'Improvise' is a good way to describe the group for those who do not know the Californians. Chali 2na's rapping has to be heard to be believed, the four of them really do create one voice. They are bouncing around the stage and shaking the hands of those in the front row from the stat of the set. Cut chemist and DJ Nu-Mark are looking very dapper behind their respective decks. They come forward to do a solo part, with portable mixers and drum machines, and they even 'play' the huge record.

'Jayou' airs early from the band debut album, but sadly during classic hit 'Concrete Schoolyard' Cut Chemist's decks seem to stop working, and it's a couple of tunes before they are up and running again, though Nu-Mark handles it well after an accapella from Chali, Akil, Zaakir and 7even. The inclusion of the kazoo makes the song too. When his decks are fixed the Chemist does what he does best, and cooks up a scratching exercise for the crowd, involving them all to open and close their raised fists.

Lighters are held aloft for 'Hey', and then the fists are in the air again to dedicate 'Freedom' to Trayvon Martin. There's classics from all the bands four albums, namely 'Quality Control', 'What's Golden' and a lot from their last release, 2006's 'Feedback'. 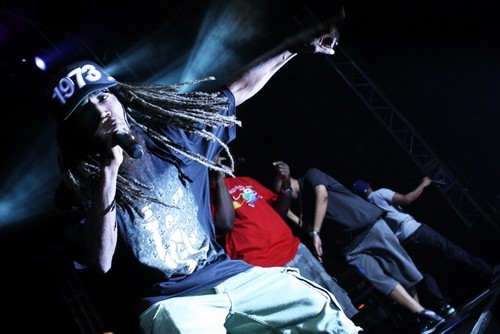 Of course after this album the band split, so it's great to see them together as the original line up and touring the world again. Let's hope a new album is on the cards, and more touring, as this is one hell of a live and uplifting show.

more about Jurassic 5
more about O2 Academy (and Underground), Leeds