Goldblade literally hit the stage. For half an hour John Robb and co rally the crowd up for tonight's visit from New Jersey's Misfits. Like the Tasmanian devil Robb runs and spins around the stage, jumping into the pit and get people to sing along to their catchy and easy to learn lyrics, like 'Jukebox Generation' and 'Riot'. 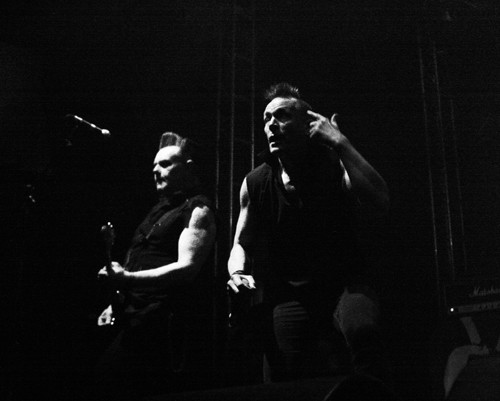 'Do you Believe In the Power Of Rock And Roll' brings the most audience participation, with Robb asking nearly everyone down front if they believe, with increasing acknowledgement from the "brothers and sisters", whilst the 'gunner' guitarist aims at them upon their response with his guitar. Robb then comically dismantles the drum kit whilst it is still being played... Always good punk fun.

In their 36th year, Misfits are still as strong as ever. After the disappointingly poor sound quality at during their Newcastle show last year, hopes were high for tonight. They did not disappoint. Old hits merged with newer songs. 'Static Age', 'Angelfuck', 'She', 'Some Kinda Hate', Teenagers From Mars', 'Hybrid Moments' are all from the first (unrecorded for years) album 'Static Age', thrilling many fans here. From then on it's no speaking (apart from the "1.2.3.4!" song starts) as the horror punk godfathers bulldoze through their back catalogue, all the way up to latest release 'The Devil's Rain', with 'Monkeys Paw', 'Death Ray', 'Jack The Ripper' and 'Father'. There's plenty of favourites in between, with 'Skulls' and '20 Eyes' as examples. 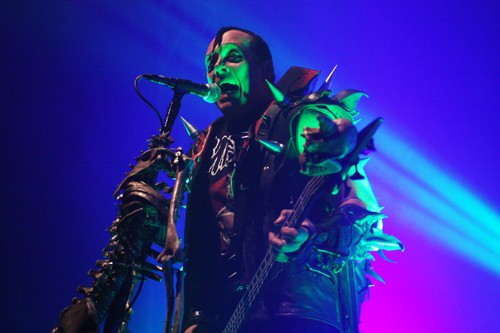 A nice dedication goes out to the victims of the tragic shootings in Connecticut, in the form of 'Descending Angel'. There's a nice surprise during the encore too, with Guitarist Dez Cadena taking over on main vocals to sing one of his past bands songs (you may have heard of them), 'Rise Above' by Black Flag.

The set ends with 'Halloween', a song that sums up the Misfits, dark horror punk that delves into sci-fi, with catchy riffs played at top speed. Drummer Eric 'Chupacabra' Arce and his double kick drums featuring the famous Misfits skull logo are sat aloft a stone replica edged cage, whilst Cadena and singer / bassist Jerry Only's microphone stands have dangling skeletons on them. It's not raining fire and huge guillotines like Alice Cooper or Rob Zombie would stage, but when the music is this good and full pelt who needs gimmicks.

The Devil's Rain
Vivid Red
Land of the Dead
Scream!
Hybrid Moments
Teenagers From Mars
Attitude
Some Kinda Hate
Curse of the Mummy's Hand
Dark Shadows
Father
Jack the Ripper
Static Age
She
20 Eyes
Angelfuck
Vampira
Horror Business
From Hell They Came
American Psycho
Shining
Dig Up Her Bones
Kong at the Gates
Ghost of Frankenstein
Death Ray
The Monkey's Paw
I Turned Into a Martian
Skulls
Where Eagles Dare
Hatebreeders
Horror Hotel
Ghoul's Night Out
We Are 138 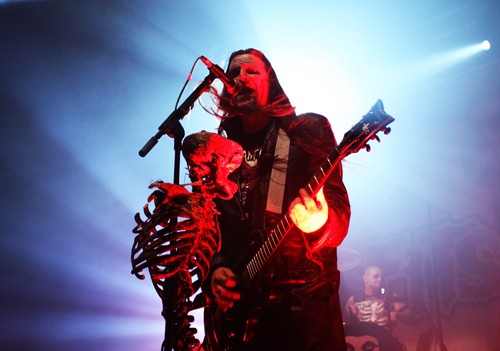