There's a chill in the air and it looks like snow is on its way but we're all tightly packed into Leicester's Musician tonight oblivious to the spring chills. Public Service Broadcasting played in this City recently and word has clearly got around that they're a prospect worth devouring. They're on the last legs of their 'Signal 30' tour but fret not - they're back on the road in May, in support of the release of their debut album 'Inform, Educate, Entertain'. You really should go and see them then. My good friend, Paul, described this gig as "Definitely the gig of the year to date, possibly the gig of the decade," and he might well be right.

But, before the main course, there's some regional delights for our tastebuds. First up are Echolocation, a band with more members than songs on their setlist. I count seven of them on stage tonight but mathematics was never my strong point. With electric cello, brass, keyboard, bass and a vocalist in a flat cap, Echolocation make a glorious cacophony. The singer snarls at us as he peddles his poetry. In fact to call him a singer is somewhat missing the point  he doesn't sing, he spouts words, mantras and political outbursts with backing from a miniature orchestra. He's Leicester's answer to Mark E Smith and it's the Fall with a dash of Happy Mondays that I'm most reminded of if a comparison is required. There's also a mighty fine self deprecating humour running through this set. "If you could all move forward because there's some kids getting crushed at the back" announces the guitarist as the keyboard player picks up an accordion and the singer a megaphone to snarl at us with more volume. "Welcome to our world. We are Echolocation and we hate you!" is a sampled refrain that fades into nothing as the audience show their general appreciation at the end of the set. One suspects that Echolocation don't hate us at all.

Peter Wyeth takes to the stage next. The contrast to what has gone before is extreme. Wyeth doesn't fill the stage with musicians but instead fills the room with looped sounds from his acoustic guitar and his voice. He builds loops onto loops, layers onto layers and this has been his art for years. "I am just a ghost", he laments and an earnestness takes over. He tells us that the battery on his mobile phone is dead so we won't be getting the birdsongs and assorted noises from that which normally frequent his music. I ponder whether it would have been too much of a hardship to ensure it's charged if you know you're playing a gig and find myself switching off and drifting into other places. Other audience members are still earnestly watching this earnestness so perhaps I'm about to do this an injustice but I simply didn't enjoy this set. There's no doubting the talent of this man but also (for me) no doubting the dullness of what he creates. One suspects that Peter Wyeth will probably hate me now.

There's a projector screen hanging from the back of the Musician stage and a vintage television has been installed on the left side of the stage. The audience are jostling for position to get sight of the spectacle that is Public Service Broadcasting. And what a spectacle it is. Before they take to the stage an image of the test card girl is projected onto the screen. I'm amused to hear older members of the audience explaining to younger members that, back in the day, television wasn't a 24/7 rolling beast and it would shut down overnight and sometimes during the day with only an image of Carole Hersee to keep us company. 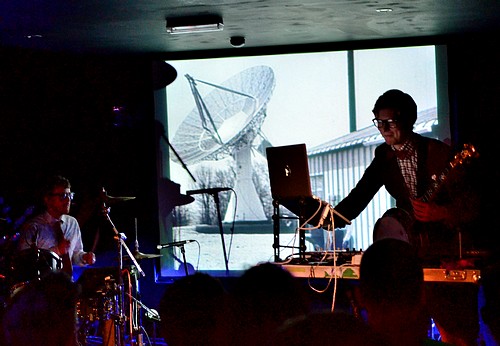 The duo take to the stage dressed like they're at a Dr Who convention, corduroy and elbow patches a plenty  there's Wrigglesworth on drums and J. Willgoose, Esq. on laptop, theremin, guitar and banjo. It's a thoroughly modern music which wouldn't be out of place in a festival dance tent  and yet the public information films that accompany each of the tunes hark back to a time when things were different. It's plain to see why they've been described as 'teaching the lessons of the past through the music of the future'.

As you'd expect from a band who've yet to release their first album, this is a set drawing from the EP's and singles they've issued. Songs from the 'War Room' EP feature heavily. In 'London Can Take It', we see Londoners on the screen taking stock of the damage done after a heavy night of Blitz bombing. In 'Spitfire' we see images of birds and planes. We're reminded of the damage and the destruction that war creates  but more than that, we're reminded of the resilience and invention that people draw from such difficult times.

Other themes are addressed. 'Signal 30' is about drinking and driving in America. Willgoose gets us all in a frenzy with an explosion of driving, rock guitar whilst Wrigglesworth pounds his drums like there's no tomorrow. The visuals exhilarate with police chases from yesteryear. There's a song about fashion possibly called 'How Do We Look?' In the encore, we're treated to the single from last year, 'Everest' and again I'm struck that these are tunes with positive, uplifting messages  that people have achieved awesome things in history often in the face of extreme adversity.

Time flies they say  and that's particularly true of tonights show. I have no idea how long this set was but it all seemed to pass in a blur. For the final song, 'R.O.Y.G.B.I.V.' ,the Musician is transformed into a rave-like warehouse party. The audience trip out on the colours of the rainbow, punters smile ecstatically at each other and I visualise how fantastic this might be at a festival when warmer weather hopefully comes. "All this has just been the beginning", we are told and nobody in the audience seems in the mood to deny. 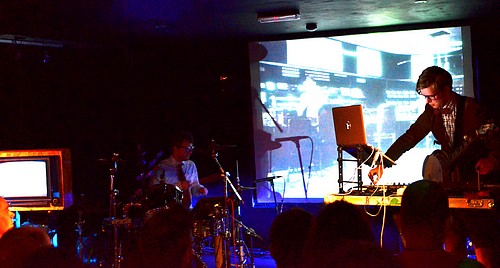 more about Public Service Broadcasting
more about The Musician, Leicester