The Garage, Islington in mid December was buzzing with an air of anticipation on this mild winter night. The return of the Fabulous Metal Bozo Clowns that are Lawnmower Deth had brought together fans from all over the UK. The band who many of today's younger Heavy Metal crowd may well never have heard of had what you may well call an older crowd, but probably not more mature. Tonight brought me full circle to a feeling I haven't felt about music in a long time... Excitement. I've seen the LD boys before  once in 92/93 and earlier this year at Download. The feeling in the air was the same as it had been almost 20 years ago. One of the crowd even brought along a ticket from a 1991 gig  just on the off-chance he may get it signed, which we'll get back to later on... 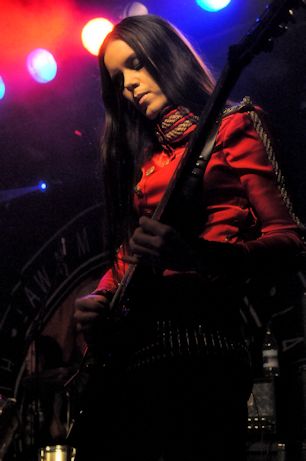 To begin the evenings proceedings, Commander in Chief took the stage. I'd heard about them a couple of years ago, from a budding guitar player friend of mine who said something or other about some chick, Yngwie Malmsteen style shredding and a seven string guitar-wielding goddess that I 'absolutely had' to look-up on youtube (which I didn't). I really wish I had  Ladies and Gentlemen I introduce to you "The Commander". This Norwegian virtuoso can play. She is an Ibanez artist who writes all of her own stuff, and has been praised by the likes of Metal Hammer as a "one-women Metal Hurricane who is smashing her way through the underground with her mix of great songwriting, face-ripping shredding and a refusal to listen to the few cynical wallies out there who judge her on image and not talent." An accurate representation of Commander in Chief who set the tone for one hell of a night. 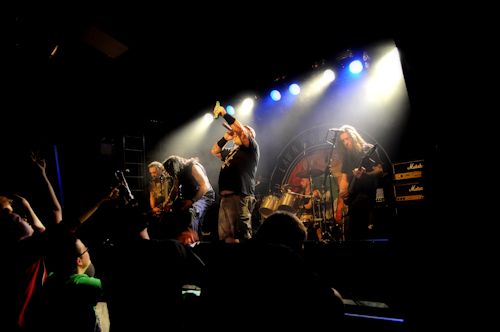 Beholder are known as one of the hardest working bands in the UK today. They should also be known as one of the most ass-kickingly brilliant too. I know a fair few people in bands who've either seen or played with Beholder. Everyone has had great things to say about them. Personally, I'd never seen them. Another regret. Holy-Mother-Of-God how good are Beholder? Why are they not bigger. It's funny because I often ask the question "Who's going to be the big festival headliners in 20 years time?" If the right person is out there, and they come across them  Beholder is an answer that I can be in complete agreement with. If you like your Metal Heavy. If you like Thrash. If you like what is musically essentially British to its core, I beg you, listen to or go and see Beholder.

Nobody could have put the crowd in a better place than Beholder. Primed for Thrash...

Five Bad Santa's and a Christmas Fairy take the stage... Lawnmower Deth disappeared in about 1993. They reappeared in 2008 at the behest of Bullet For My Valentine  for their gig at Alexandra Palace. Since then they've had a couple of festival appearances and a gig  but nothing that anyone who didn't know who they were would notice. Tonight was different. This was a Lawnmower Deth show. I don't mean gig, I don't mean concert. I mean 'Show'. 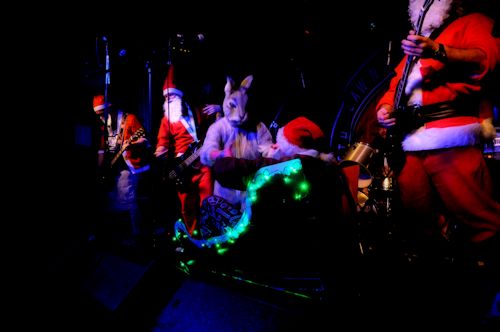 The lads from Yorkshire have had a dedicated following over the years. Some would say they're a Cult Classic. It's probably down to the sheer entertainment factor that they bring musically, lyrically, and personally on stage. There seems to be a distinct lack of soul in today's music. Someone pointed out to me before the gig that there's no comparison to 20 years ago. Music is instant. Long gone are the days of waiting for 3 months for your favourite bands' new album to come out and then having to actually go somewhere and physically buy it. Lawnmower Deth brought it back tonight. Like I said at the beginning, I haven't felt this way about a show in years. Ripping through classics like 'Spook-Perv Happenings In The Snooker Hall', 'Jagged Wedge', 'Drink to be Sick' and so on, I've always said that the sign of a good band is one who can play live faster than they do on record and do it well. Lawnmower Deth do it very well.

With the inclusion of Santa's sleigh, an appearance from 'Sumo Rabbit' during 'Sumo Rabbit And His Inescapable Trap Of Doom', guitarist Kev dressed in white as the Christmas Fairy, lots of silly-string and beer, the party was in full swing. Satan himself even showed up, just to show people how it's done during 'Satan's Trampoline'. 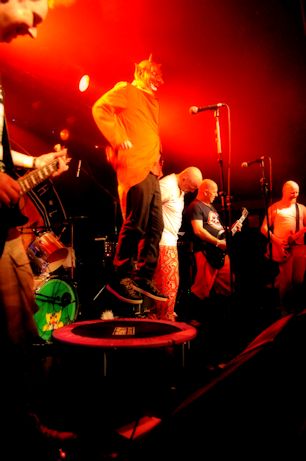 If you don't know Lawnmower Deth, and you don't know their songs, and you're thinking to yourself "Are these really the titles to songs?" - Yes, yes they are. Lawnmower Deth are not really to be taken seriously. They have no hidden deep meaning to their lyrics. They are fun. They embody the fun that seems to be missing from much of the heavy metal scene these days. A stripped-back 'Unplugged' cover version of Slade's 'Merry Christmas Everybody' put everything in place for 'Kids in America' and a couple of fish-dancing stage invaders made for an epic end to an epic night.

Lawnmower Deth are real. They are fun. They are what shows should be about. They also give a damn about their fans and that everyone had a good time and their fans show their appreciation right back (one attendee flew all the way in from America, just for the gig). I've got all the time in the world for these guys. That guy that brought his ticket from 1991  he got it signed... And there's plenty of pictures of these guys with fans as profile pictures on Facebook this week.

My only hope is that we'll see more of Lawnmower Deth in 2013, so they can inspire a new generation of nutters... 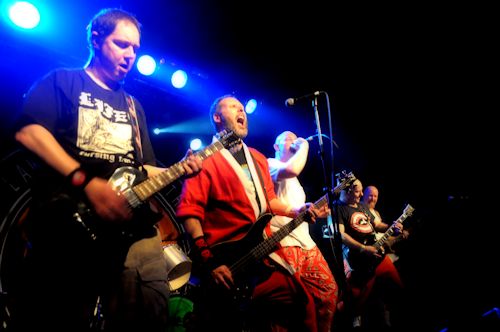