The strong winds bashing the country mean all the trains to Leeds are late, which means yet again we are late, though we do stumble into the sounds of ska punk band Citizen Fish. They are onto their last two songs, 'Free Speech' and 'Wake Up', two lots of two fingers up to the state of society, extraordinary lyrics like "obesity is sold by clowns" and "Now you'd march against the uniforms / Your taxes pay to stop you." Dick Lucus' snarling delivery is unassuming but brilliantly forceful. 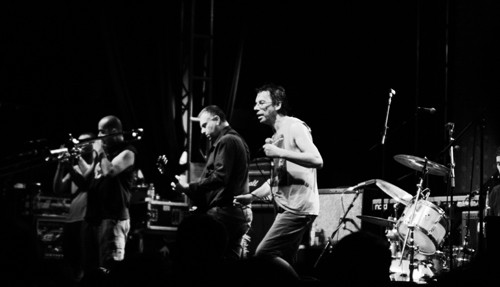 Levellers are a little late on the stage who cares. The flashing patterned blue lights upon the green and red backdrop look awesome, especially when their silhouettes appear. In fact all the lighting tonight is good, I have seen the Levs many, many times and it seemed to be brighter and more atmospheric tonight, particularly when Stephen Boakes takes to the didgeridoo during the jig at the end of 'The Boatman'. Or maybe I have been enjoying myself too much to notice before

It's a set featuring a lot of hits, as the Levs play for the crowd, and look to be enjoying it as always. Their whole outlook on being a band has always impressed me, organising the amazing and truly grassroots Beautiful Days festival, spending recording money to set up Metway Studios, and thus insuring sell out crowds even though they are long out of the charts (well shut of them charts if you ask me).

The hits like 'Beautiful Day', 'Fifteen Years' and 'One Way' make the Academy erupt, there's barely a folk not moving who can. The lady who is always three people high (on someone's shoulders) in the centre of the crowd is here, and is replaced by a bloke at one point. I do hope he's the poor bugger who is bottom of the totem pole finally having a go. 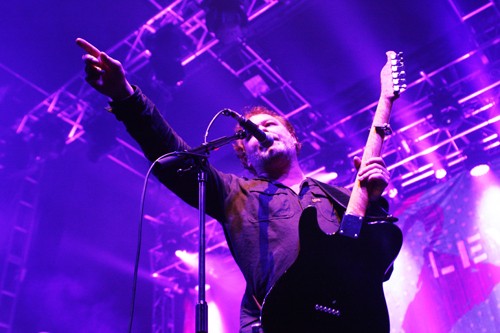 The tour this year (although they tour nearly every year anyway!) is to celebrate latest release 'Static On The Airwaves'. This tenth Levellers album has received rave reviews from fans and the press, and is seen by many as their best work for 15 years. Recorded in the Czech Republic and produced by Sean Lakeman, it features many favoured parts of the Levellers best known tracks. 'Truth Is' has a fiddle riff from Jon Sevink like one that would appear on 1991's 'Levelling The Land'. The first track on the album and that we hear tonight starts with electronic effects... 'We Are All Gunmen' also builds up and has a catchy as chuff chorus delivered by Simon Friend. Set ender 'The Recruiting Sergeant' is a traditional war song that they have rearranged into a Pogues style, and features as the last song on the album. People from the crowd who have enquired and auditioned this afternoon join them onstage for this track. 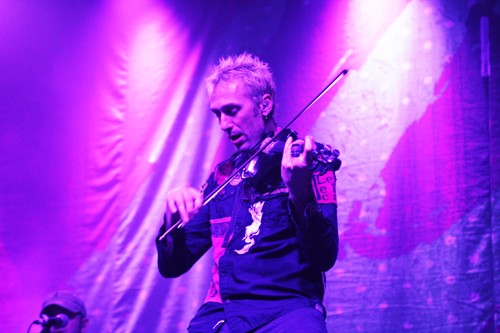 As always the Levellers put on a great show, and this new album shows them going from strength to strength. Plus the joint pogoing looked awesome! Roll on Beautiful Days 2013! 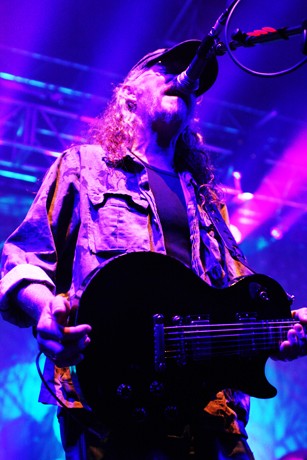