Many have been waiting months for this highly anticipated first of 2 shows. Carter USM don't play every November but they have played a few of them over the last few years and they always sell out. This time we are lucky enough to get them in Leeds as well as the usual Brixton. This also brings with it the grateful news that local band Cud are main support.

The cheers for Frank and Walters are just fading out as we arrive. Tonight though it's all about the bands with the letter 'C'. Cud come on in elegant style to quite a roar. Carl Puttnam is as flamboyant as ever, with tighter than tight checked trousers and garish glasses that Elton John would nab given half the chance. Guitarist Mike Dunphy is back with the band this year after 17 years, and it gives a great lift top the sound. Original drummer Steve Goodwin is no longer with the band, but bassist Will Potter more than makes up for the old school era rhythm section. 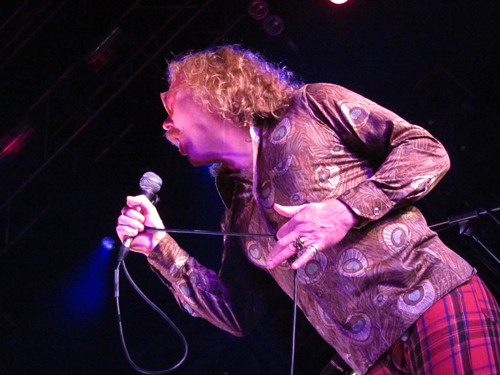 'Purple Love Ballon', 'Eau Water', 'Only A Prawn In Whitby', 'Love in A Hollow Tree', 'Robinson Crusoe', 'I've Had It With Blondes', 'Rich And Strange', 'Strange Kinda Love' and 'Hey Boots' make up the hit heavy setlist, plus a newer one too which I didn't catch the name of. You can tell the Space Cudets (Cud fans) as they are doing the odd dance in the moshpit, as the tempo of some of Cud's tunes adds a bit of swing to their step, before the usual moshing antics ensue. Catch them at the Cockpit next month.

The beer belly bashing continues (I'm not taking the piss, mine is coming along nicely too) when the lights start blasting out from Carter USM's huge back wall of beams, pulsing along to the staccato punching beat of 'Surfin' USM'. From then on it's all the hits too from the duo and their drum machine. I feel for this drum machine it really needs to one time make it onto the stage for some much needed recognition!

The swirl of the moshpit is huge now, with the front half of the room all going for it like they were a decade younger. There isn't a Carter song that isn't made for singing along to, and with one of the best lyricists in the world writing the words it's not hard to get hooked in even for the casual fan. 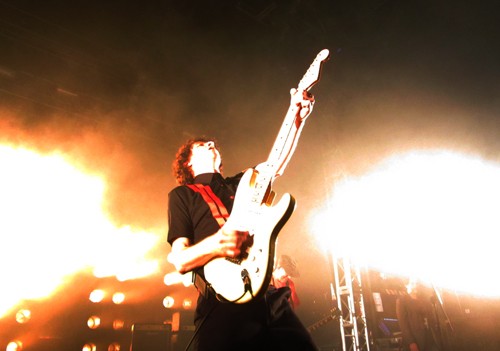 The usual covers are in there, 'Rent' by the Pet Shop Boys and 'This Is How It Feels To Be Lonely by the Inspiral Carpets. Tim Hingley from the latter has stepped in to play the aftershow, as the also highly anticipated Clinton USM (Japan's best Carter tribute band) have sadly had to pull out. This is incredibly gutting for me, so much so I miss the aftershow.

When crowd favourite 'Falling On A Bruise' airs I also remember the guy at the old Joseph's Well in Leeds, who happened to have all the lyrics tattooed on this back when Jim Bob had temporarily forgotten his words during the requests. I'll bet he's in this moshpit, centre front.

There's not many bands that were about a decade ago that make you feel like you are surrounded by family at a live show. This is one of those times, as with all Carter shows. The joyous chorus of 'You Fat Bastard' The mumbling the way through the verses as the night goes on, to shout the main parts when they arise. Not cos you don't know them, just that it's a bit foggy after all these years

Surfin' USM
My Second to Last Will and Testament
Midnight On The Murder Mile
Rubbish
Do Re Me, So Far So Good
Lean On Me I Won't Fall Over
Good Grief Charlie Brown
Say It With Flowers
Rent
Anytime Anyplace Anywhere
Falling On A Bruise
While You Were Out
Shoppers' Paradise
The Only Living Boy In New Cross
A Prince In A Pauper's Grave
Glam Rock Cops
After The Watershed
Bloodsport For All
The Impossible Dream
A Perfect Day To Drop the bomb 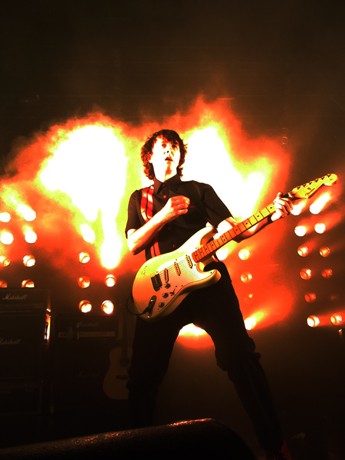