Having seen Slamboree at Beat Herder festival 2012, I'm afraid I've been badgering as many people as I can to watch their live performances on Youtube or better still, in the flesh. I can count on the fingers of a recently deported cleric's hand, the number of bands whose live performances have had such a huge and immediate impact on me. I make an early commitment to attend the gig and don't manage to convince any of my friends to come with me. Ahhh. Nervously reading more and more about Rumpus, I get the feeling that heading out alone won't be a problem, the evening sounds like I'll be in the company of plenty of "friends I haven't met yet".

The reports make the event sound like an indoor festival and butterflies stir my stomach and onlookers gaze on as I make my train journey into London in fancy dress. I arrive at the venue (an old theatre), and make my way to the bar as the theme from Star Wars' Mos Eisley Cantina plays in the background. The musical choice seems very appropriate as I gaze around my fellow creatures inhabiting the beautifully decorated venue.

Succumbing to my urge to explore, I take a wander up the stairs to a DJ spinning some great tunes. I've no idea who it is but there's an eclectic mix of ska and bass heavy beats getting an airing and plenty of bodies swaying appreciatively. Upstairs again and another bar area but this one has a completely different vibe to it. The hair and make-up artists of 'Hairy Poppins Pop Up Hair Salon' set about transforming punters. Taking direction in beautification, they set about their work with broad smiles on their faces and fast working fingers.

A tarot reader has developed quite a following and there's a lovely selection of handmade jewellery for sale too.

Meanwhile back on planet Rumpus and out into a 'Blade Runner' style alleyway come smoking area, further 'rooms' lead to strange places. A ball pit (adult size), and art gallery with all manner of weird and wonderful paintings and 3D pieces are on display are busy with people.

The Travelling Tavern is playing some blissful deep dub with a bass so heavy I can feel it in my chest. It's lovely. Just up a set of stairs, 'Suck My Rock' has put together a photo shoot set and plenty of people are getting snapped. The maze like venue is a perfect location for this kind of event.

I catch the end of Gypsy Hill whose fast paced Balkan style sets the scene perfectly for my highlight Slamboree. Slamboree take to the stage and I'm really not quite sure how it's happened but I've managed to get to the front of a packed crowd. The madness begins. Now, if you haven't seen it, I feel like I'm about to ruin something quite magical by trying to describe Slamboree with something as clumsy as words. Apologies, I'll try not to let them down. 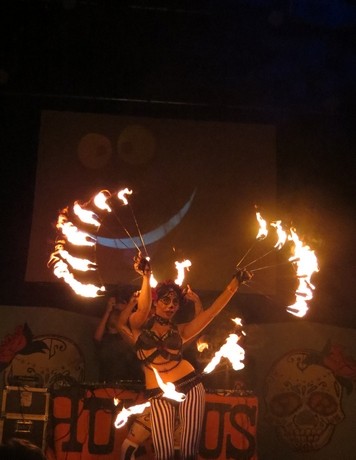 Excitement mounts among the expectant crowd at the front; we all know we're in for a real treat. Mike Freear appears, almost conductor like and takes his place behind the decks. He is accompanied by musicians and performers and the whole place explodes into life. The brass section on stage introduces a track and a Balkan stomp envelops us. A wordless call to dance has been signalled and we are GO!

The next hour and a half moves seamlessly through a musical and theatrical masterpiece. At one point I notice the Cheshire cat is projected onto a backdrop, but really, when there's this much happening on the stage, the projections seem superfluous.

During the set, the singer's lungs seem to be supplying endless fuel to a deep and powerful voice as she moves to the barrier. A few feet away I hear the unamplified and amplified version of her vocals. She is amazing. I'm captivated and forget for a moment that I really ought to take some photos. On stage, the trombone player has laid down his brass and is stomping around the stage. He seems to have been possessed and has become an unlikely accident out of wedlock from Dr Zeuss, Jim Henson and Albert Hoffman.

While the music grabs us by the ears lobes and shakes, on stage there's fire! One of the performers is spinning a hula hoop on each limb (no mean feat on its own), whilst moving rhythmically, to the tunes. There's juggling, street dance and the Balkan circus rave is born.

Somewhere behind me in the crowd, (seemingly about 15 metres away), I can hear a trumpet. It seems like a trick by the soundman, a sound magically thrown to the back of the room. As I turn around I see a man a few paces away, playing what looks like a half sized trumpet. I've had this before at gigs, people who aren't on stage playing instruments. Almost every other time it's been awful. Not this time. The man is ushered forward to the barrier by those on stage. 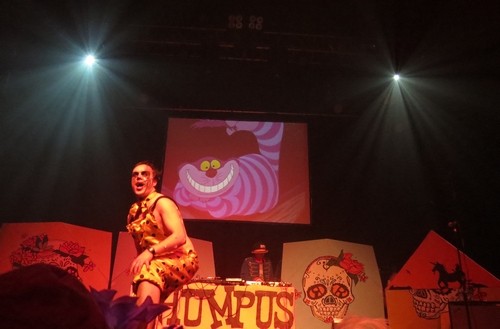 Again the singer comes to the front with a microphone and he is amplified properly. Nobody wants the mic taken away, he's bang on the money and everyone is lapping it up. I hope someone from the band gets his number; this is a magical Slamboree experience!

A crescendo is reached and things calm slightly as a barefoot Beans On Toast makes a guest appearance. His poetic rapping and poetry with folk undertones are known to me and it's a great surprise to see him in this context.

Musical highlights are the Slamboree take on 'Zorba The Greek', the slow hand clap building and building, and the 1980s' video game sound of 'Little Boxes'. I'm afraid a lot of the rest of the set I can't put names to, but one thing's for sure, these guys are on form. Miss them performing near you and you're bound to regret it.

Rumpus is a great night out, I make new friends, talk to loads of people and I'm sad when it's all over. Looking back I wonder where the night has gone, isn't that the way the best nights out end? 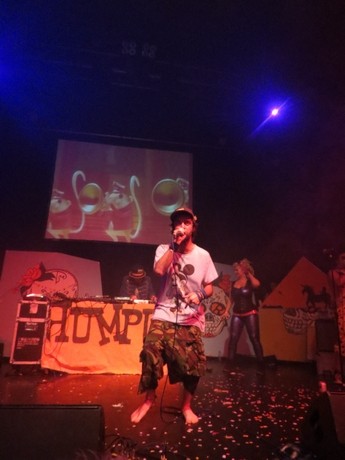 more about Slamboree
more about The Coronet, Southwark