It's mid-November. Time for a well known band of the early 90's to play a show or two... one in Brixton and one in... Manchester? Yes, the duo that are known as Carter the Unstoppable Sex Machine have this time travelled up North for one of their Pre-Xmas shows instead of creating a mass migration of Northern Carter fans to South London for one weekend in this late month. Having destroyed the crowd at Beautiful Days in Exeter this Summer, the guys are back again to play the hits for their loyal legion of fans. 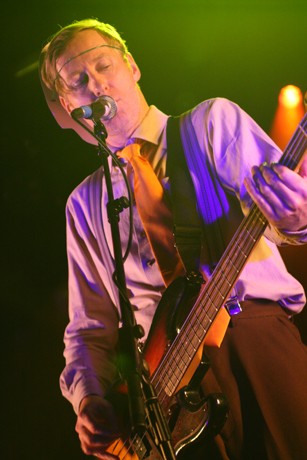 The early start of Tim Ten Yen means I miss his set, but arrive just in time for The Frank & Walters. Indie was never my favourite type of music so I really don't have much to comment on, but the masks the band wear (of their own faces!) and comedy jokes between songs are loved by the crowd. Personally though I am here for the main band.

After James' 'Sit Down' and a bit of The Wonderstuff blast through the speakers and get the crowd in Carter mood (that and all the flowing beer) the duo take to the stage in front of and behind a huge lighting set up. Sadly Jon Fat Beast cannot be here to introduce them as he always does to the chant of "You Fat Bastard". This does not stop the crowd shouting this lovely comment throughout the show.

Smoke has filled the room, bright yellow lights blind those down front and the flashing strobes surround the darkened figures of one Jim Bob and Les 'Fruitbat' Carter, the silhouettes of a suited figured and a baseball cap wearing shadow holding a guitar a piece. The legendary sounds of the drum machine are complimented with the lighting, and it's up to these two to provide the stunning puns and lyrics we can all join along to in our sleep. Thing is they are as true today as they were when written in 1989 onwards. 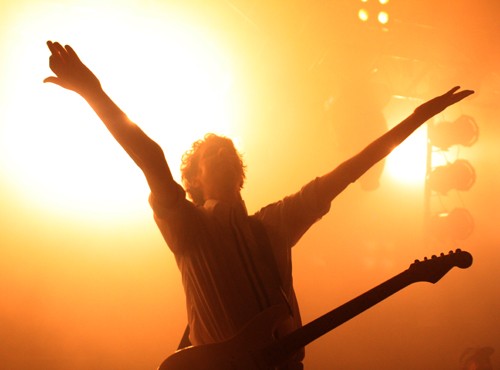 The show starts as many of them do with 'Surfin' USM' with its sing a along "Ba ba ba bada bada ba ba". All the hits are here, 'Lean On Me', 'Glam Rock Cops', 'Do Re Me, So Far So Good', 'The Only Living Boy In New Cross', 'After The Watershed' and more. There are many birthday requests, Jim Bob jokes that he'll never get through them all! This is why people love this band, they are a simple set up, with great riffs and clever lyrics, and they do love their fans, keeping them loyal. The merch stand does a killing every time to prove this! As does the bar.

Yes I do feel sorry for the security in the pit - the average width of a Carter fan has increased over the years (the "YOU Fat Bastard" chants really are ironic) and the amount of crowdsurfing that was increasing as the show went on must have put a few backs out. I viewed some of the show from the balcony with my pregnant friend and it looked amazing; the smoke created what looked like a sea of heads on a misty morning field, with the odd legs pointing in the air. That coupled with the blouse, greens and red laser lights and the back lights looking like a hundred car headlamps this is a visually pleasing show! Plus not one fuck up between man and drum machine! 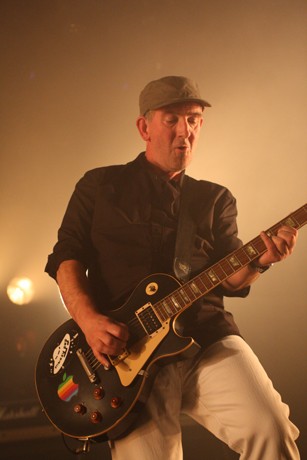 The lights dim slightly for 'The Impossible Dream' until it kicks in then someone puts the big light on again. Jim jokes "Why do you make us do this? Give us a break, why are you such good fans that we have to keep doing this?!" It is very true, but you can tell they love it!

The encore sees 'Panic' by The Smiths, though there is no 'Rent' cover by the mainstream duo that some say these are a version of, namely The Pet Shop Boys. Great to hear this cover instead though. Follow this up with 'Sheriff Fatman' and finish on 'G.I. Blue' and you have another great show from Carter USM.

Surfin' USM
Midnight On The Murder Mile
24 Minutes From Tulse Hill
Billy's Smart Circus
Re-Educating Rita
A Prince In A Pauper's Grave
While You Were Out
Shoppers' Paradise
Anytime Anyplace Anywhere
Lean On Me
Let's Get Tattoos
Glam Rock Cops
Falling On A Bruise
Sing Fat Lady Sing
Do Re Me, So Far So Good
Bloodsport For All
The Only Living Boy In New Cross
After The Watershed
The Impossible Dream
A Perfect Day To Drop the Bomb 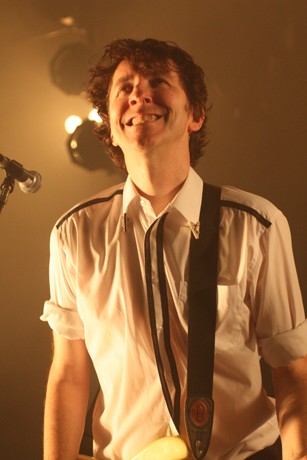