As we enter the venue to the last dying chords of Polar Bear Club (who for that instant sound really good!) tonight is all about the support. Not that I am not a fan of Rise Against, but it was the addition of the name Tom Morello that swung it for me. How often does a guitarist legend such as the man behind Rage Against The Machine's awesome riffs appear in Leeds? You can count it using no hands! 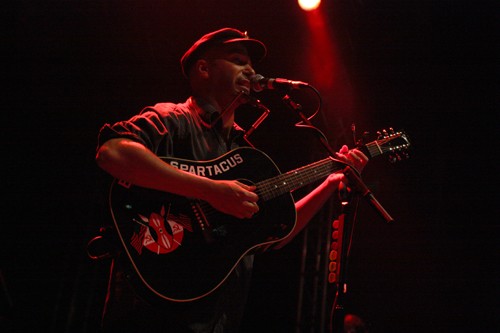 The place is full and you can tell many are here for the same reason as me. As the big guy takes to the stage with a full backing band The Nightwatchman is ready to teach Leeds the ways. I thought it would be solo acoustic stuff from Morello but the addition of the 3 extra musicians (the Freedom Fighters Orchestra) adds a great layered sound to his political songs. He has his trusty 'Black Spartacus' Gibson steel guitar to hand, dedicating song 'Black Spartacus Heart Attack Machine' to it. Other songs 'It Begins Tonight', 'One Man Revolution' and 'The Road I Must Travel' are excellent protest songs, and the stripped back version of Bruce Springsteen's (and occasional RATM cover) 'The Ghost Of Tom Joad' goes down a storm.

Many may have been expecting RATM riffs and Audioslave covers tonight, but The Nightwatchman is here to teach. He spent the night before singing with Occupy Nottingham after the Rock City show, a protest group similar to the one in London at St Pauls. Unfortunately Occupy Leeds never was arranged, but we still get to learn a protest song from Morello called 'World Wide Rebel Song'. He takes a far part of his 30 minute set (which over runs to 40 minutes, we are slow learners) to teach us the words to this quite easy song.

Those that struggled could just raise one fist in the air and sing "nah nah" I was in this group... Leading us in this song was Tim Mcllrath, who had happy birthday sung to him lead by the crowd and Morello. 'World Wide Rebel Song' is dedicated to a bunch of South Korean guitar factory workers who were sacked for asking for better working conditions. Morello was due to play a benefit show for them but the day before the Haiti Earthquake stuck, and the donated all of the gig proceeds to that emergency fund. That is what The Nightwatchman is about, showing us that the world has great people like this who will give all even if they have nothing.

There's even a snippet of RATM as four bars of 'Sleep Now In The Fire' are played, but as with Audioslave when each side of the supergroup played their own there are no vocals, but the crowd goes crazy. There is also some crazy guitar moves that you would expect from this legend of the six strings, with mixing (sliding / scratching) of the fret board and played with the teeth. Truly amazing.

It must be remembered though that is this not his show and Rise Against are up now (an extra half hour would have been great though). The place is still crowded but I have been here before when you cannot move for a sold out show (as is tonight's)... maybe the Rancid and Madness fans back then were a lot bigger. 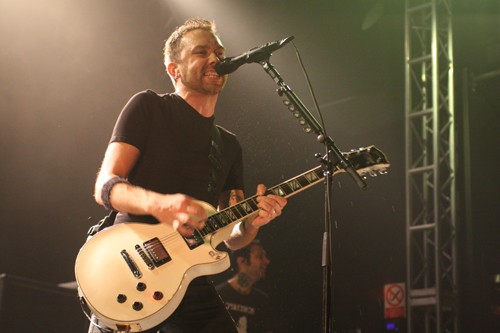 Starting with 'Re-Education (Through Labor)' the gig goes from strength to strength, until a barrier malfunction halfway through the gig means that the music has to be briefly stopped and the excited crowd have to move back (even then there is still lots of room at the back of the stalls). This leads to some slow songs, namely the great 'Swing Life Away', but it was needed to restore the crowd back for a crushing punk rock finale. 'Hero Of War' was dedicated to Morello, as the band say they are huge influences on themselves (Rage Against / Rise Against) and it was an honour to have him support them. Thanks for bringing him!

I thought there would be an added Morello and Rise Against moment but no such luck. 'Give it All' during the encore really raised the roof. The inclusion of only 4 songs from the latest album 'Endgame' was good news for old school fans too, as it was billed as the 'Endgame Tour'. An energetic show from an energetic band, who stand for all the right things (the addition of a Occupy LSX stall shows this). A great show all in all.

Give It All
Savior 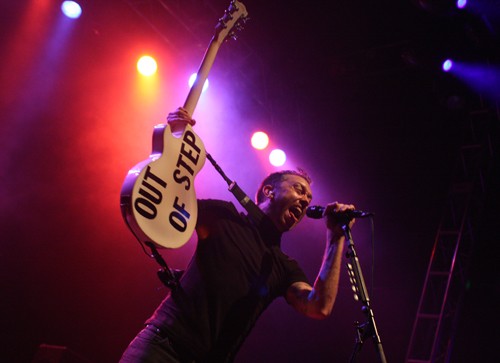 more about Rise Against
more about Tom Morello
more about Polar Bear Club
more about O2 Academy (and Underground), Leeds