The Brudenell Social Club, which has recently won the North East regional final of NME's search for the Britain's best small venue, tonight is completely packed for one of only 6 UK shows on this tour before they hit the Rebellion festival in Blackpool next month. Punks of all ages crowd the entrance getting their nicotine fix before watching Geoffrey Oi!Cott. 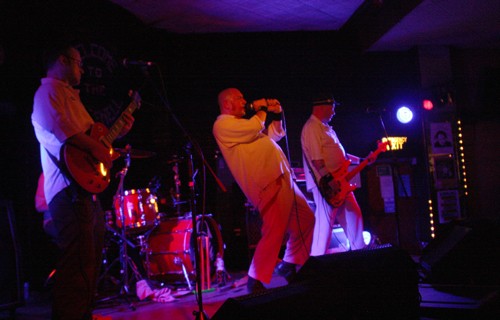 These guys - W.C. DisGrace, Freddy Skintoft, Spike Gatting and Devon Malcolm McClaren are Leeds own answer to cricket punk with a toy set of wickets in front the drums, cricket attire and a real cricket bat that frontman Freddy Skintoft uses as a guitar (above the head solos, have to be seen to be believed). With T-shirts like 'The Umpire Strikes Back' based on the Star Wars film and songs like 'Dawn Of The Dickie Birds' and 'Oi Oi Oi Oi!' you can see this band have carved a niche in the market for something that was probably never really needed but now is... 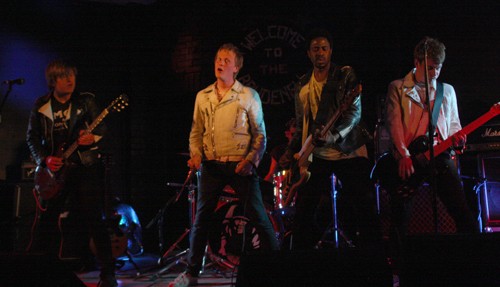 Cyanide Pills are another punk band from Leeds, but on the other side of 40 and without any sporting equipment. They have a large following here and their own pit starts to form as they play songs like 'Suicide Bomber'. They are tight and punchy punk, with high resemblance music wise to The Buzzcocks, Nosebleeds and The Addicts. Again the names are in the punk vein, though not as crazy as the Oi!Cott gang... Phil Privilege, Alex A, Sy Pinkeye, Chris Wrist and Alarick 'The Trick'. They are bloody catchy and I will be checking them out again, good old fashioned punk, along with Geoffrey Oi!Cott. 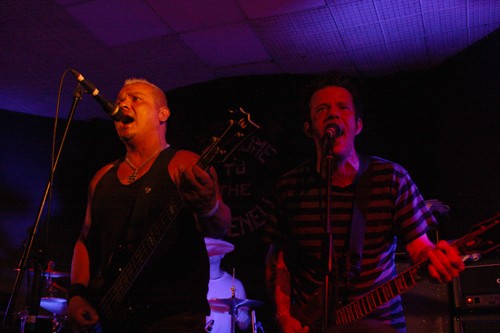 Everyone's here for The Dickies though, and after the final nicotine fix the place is heaving. Punctual punks The Dickies take to the stage on time and get straight into their short fast bursts of unique punk rock. Having been together in some form since 1977, this band have seen it all The first California punk band to appear on national TV and be signed to a major label, unfortunate drugs deaths, movie soundtracks and of course the Banana Spilts theme tune. They bridged the gap and appeared on Fat Wreck Chords compilations, allowing people of another generation like myself to be introduced to their crazy vocals and speedy punk delivery. And here they are, still being bonkers after 34 years.

If you have seen the Dickies before then you have an idea how this show will go... The 'toy' box of weirdness is prepped and ready to provide such on stage props as dog puppets, a blow up doll and snorkel, and my favourite, Stuart the cock and balls puppet. Singer Leonard Graves Phillips, though cracking on now, still has the moves, performing high jumps and many 'dance' moves throughout the 70 minute set.

The fast onslaught of short songs leaves little room for banter, but I can confirm that Phillips' voice is not as high pitched when he does speak as when he sings and warbles for that unique Dickies sound. It is a little bit lower... You can expect songs to match the show, with silly but at the same time ingenious titles and subjects. 'Gigantor', 'If Stuart Could Talk' (the aforementioned Stuart that is), 'Blowing With Bedrock Barney' (yes, about Barney Rubble, who the band "have known for 55 years!"), plus covers of 'Nights In White Satin' by The Moody Blues, 'Paranoid' by Black Sabbath and 'Keep On Rocking In The Free World' by Neil Young. 'My Pop The Cop' about the added annoyance of an already annoying step dad's employment, is my all time favourite, and of course the 'Banana Splits (- The Tra La La Song)' theme tune is the song to end the night on. What a fantastic treat for the eyes and ears this gig turned out to be.

Killer Klowns From Outer Space
Fan Mail
Nights in White Satin
I'm OK, You're OK
See My Way
Jim Bowie
Got It At The Store
Give It Back
Paranoid
Just Say Yes
Waterslide
Manny, Moe And Jack
Magoomba
Poodle Party / Doggie Do
Blowing With Bedrock Barney
My Pop The Cop
You Drive Me Ape
If Stuart Could Talk
Gigantor
Rosemary 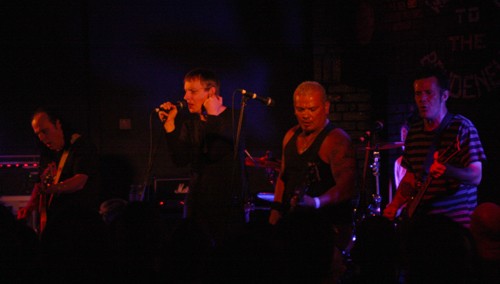