Rival Schools were in danger of becoming just another of the short lived projects that punctuate the career of frontman Walter Schreifels; and after the crude brilliance of their debut 'United By Fate', that would have been a damn shame. Thankfully the band reformed in 2008, and this year saw the release of their second official album 'Pedals', and from hearing them play much of it live at Manchester Academy, it's sounding every bit as good as the first. 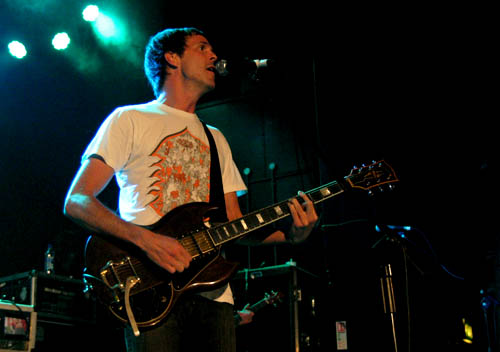 The sound is much the same: an antithetic blend of Hardcore and Indy-rock that has all the angst and emotion of the former, while retaining the tunefulness and accessibility of the latter. Schreifels voice needs special regard here, for he has the ability to effortlessly maintain an emotive hoarseness to his voice, while carrying the tune perfectly and not sounding strained at all. The sound production was perfect too, which meant you could hear every word.

Thankfully the band didn't neglect the songs from 'United By Fate', either, and many of them, in fact, were centre pieces of the set. 'Undercovers On', for example, was a highlight of the show, and the effort and poignancy the band gave to it betrayed that it was clearly intended to be that way. The likes of 'Shot After Shot' and 'Choose Your Own Adventure' from their new album felt little more like danceable bridges between these great crescendos. This is not to say they were filler, but just to point out where I felt the focal points of the show were.

And the best example of this was at the end  arguably where it should be. After playing a surprisingly good and seemingly impromptu cover of the introduction to Bon Jovi's 'Dead or Alive', they stormed into their distortion heavy 2001 single 'Used for Glue' which judging by the shoes to heads ratio visible above the crowd, was exactly what the fans were waiting for. I am extremely happy these boys are back together, and it seems I'm not alone.

After a short introduction in the form of 'Ode to Isis' the brainchild of Conrad Keeley and Jason Reece, And You Will Know Us By the Trail of Dead, went straight into the 16 minute plus prog epic that marks the latter half of their latest record 'Tau of the Dead'. This, by any standards, is a brave move for a band, but theres something so animated and cheeky about this band that makes it almost appropriate. 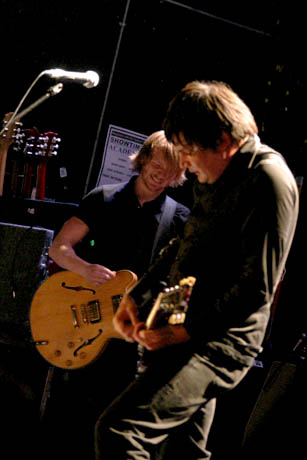 The band has stripped down to just a four piece for this new record, which draws you in close to the music and gives it an almost cosy feeling; while the reverb heavy guitar and ambitious melodies simultaneously give it an epic galaxy-faring quality. The only way I can think of describing this confusing aesthetic is by comparing it to exploring the universe in a particularly comfy arm chair: unpredictable, amazing but perfectly safe.

There was something of a trade off with watching this band, however.

Entertaining as it was to see these musicians throw themselves around and convulse erratically to the sounds of their own instruments, it definitely took something away from the music. This was particularly true of the vocals, which were given, in the most part, by Keeley. Running back from whichever section of the barrier hed decided to scale to start a given line, his voice was strained and lacked power, so that it often faltered and failed to dominate over the instruments.

Saying that, there were moments where their behaviour enhanced the show. 'A Perfect Teenhood', for example - which even on record sounds like the instruments are about to fall out of time, out of tune, and into little pieces  really benefited from their dramatic execution.

And You Will Know Us by the Trail of Dead clearly aren't trying to make any new friends. This was a show that was completely aimed at their fans, at making a spectacle that the records will never be able to compete with  and there's nothing wrong with that. It just risks alienating relative newcomers to their music like me.

more about Rival Schools
more about And You Will Know Us by the Trail of Dead
more about Academy 1, 2, 3 & 4 (Manchester University), Manchester