Seeing the hushed beauty of Iron and Wine (aka Samuel Beam) expanded and amplified into a loud rock ensemble had its good and bad points. Gone was the tenderness and intimacy of the earlier records, but in its place was a heady mixture of guitars, percussion, saxophone and mandolin that swelled and spiralled to brilliant heights, or cooled and sunk into meditative hymns. And this wasn't just the case for their newer songs, which are recorded in this style; their whole sound has transformed and that includes the way they play their older tracks. 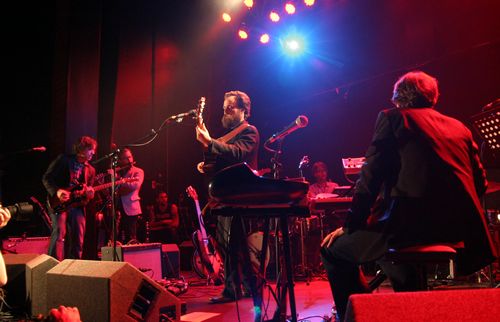 As early as the first few songs it was clear they were doing things differently, when 'Boy with a Coin', 'God Made the Automobile' and 'Everything on the Ground (Lilith's Song)' bled into one another, taking the lead of the oozing saxophone. Though such a thoroughgoing reinvention of his music is impressive, during some of the louder parts Beam's voice, which is perfect for the quieter bits, sounded weak and jolted through unevenly, weakening the whole sound. This was a particular problem when he was being drowned out by the uninteresting timbre of the backing vocalist. Also, there were times when the new sound verged on that of bog standard rock, which brought out the repetitiveness of some of the song writing; a repetitiveness that actually complements the more meditative interpretation.

There were times where it really did work, though. Around half way through the band played a completely reworked version of 'Free Until They Cut Me Down', which is usually a quietly edgy song, and turned it into a dark and introspective jazz epic. The band would play long proggy interludes between songs, too, which made the transition smooth and interesting. 'Walking Far from Home' was another success combining elements of electronica and layered melodies into a dreamy and sunny sound that brought the lyrics to life. The only problem here was, again, his voice was at times too weak, and as I mentioned before this was made worse here by the overly loud, and quite bad backing vocalist. 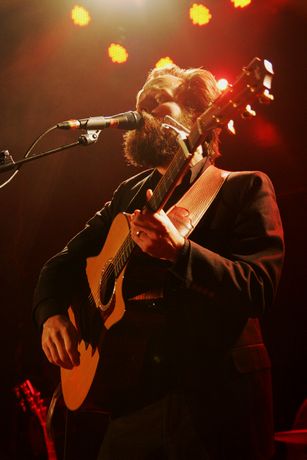 My reaction to the show was as confused as this review is. There were moments when I was absolutely blown away by the talent and originality of what I was hearing, but always just around the corner was something that made it fall apart. Nowhere was this more clear and painful than with the encore. Beam came back on stage to play the tear jerking ode to love and death 'Naked as We Came'. He was faithful to its original minimal sound, and his voice shone out in all its delicate brilliance, but then the backing vocalist came in, and the spell was once again broken.
article by: Robert Knowles
photos by: Bryn Russell
published: 18/03/2011 09:53