Its been quite a year for the veteran space rockers Hawkwind. They received the MOJO Maverick Award, headlined GuilFest's Good Time Guide Stage, held their own, aptly named festival, Hawkfest and released their first new studio album in five years titled 'Blood Of The Earth'. The thing about this band is they are constantly evolving and touring. So this being the reviewers 20th Hawkwind gig I was looking forward to a mixture of old and new.

Waiting to get into the venue it became very apparent that the age of the band is matched by the age of the fans, gone are the lab coats and denim jackets and in was walking sticks and wheel chairs. However one fan, who had made the trip from Germany, was regaled in a flying helmet which was very apt. The warm up band for the evening where The Jokers. Well what can one say, I have seen many Hawkwind warm up bands but these four rockers where up there with the best. A fusion of hard rock and glam styled showmanship that would put Kiss in their place and on that theme, the bassist was face painted Gene Simmons Style. The songs were heavy, filled with riffs from ACDC to Led Zeppelin and really got the crowd going. 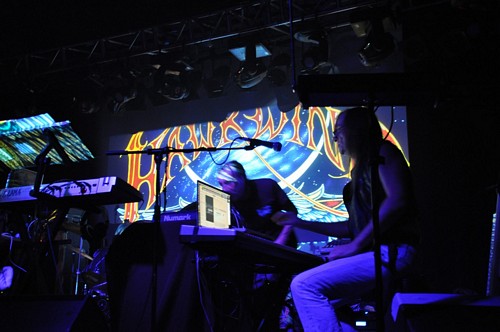 After a quick break Hawkwind appeared on stage in there usual manner, never hurried and always with a few words to the crowd. The set started off with 'Blood of the Earth', taken from the new album and from the start the usual Hawkwind stage lighting was in full effect, with a back drop projection show that could have been taken directly from a Floyd gig in 68 or for that case, a Hawkwind gig in 71.

Mr Dibs, Hawkwind's larger than life bass player, talks into his mic while the rest of the band get into position. Our Captain, Dave Brock, takes a back seat and hides behind a bank of keyboards holding his guitar, he is after all pushing 70. One of the remarkable things about Hawkwind is they do know how to put on a great show. Throughout their musical journey they have always had stage dancers and 40 years on its the same. 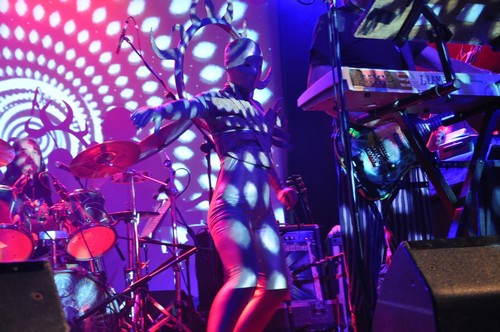 My partner, who was attending her first Hawkwind gig, comments on the girls dancing on stage, liking their space age outfits to Barbarella. After the epic 'You Shouldn't Do That' and 'Lord of Light', the band rip into 'Sonic Attack' and 'Spirit Of The Age', these being a massive favourite with the crowd. The version played tonight though was stunning and one of the best renditions I have heard since the 80's. With Tim Blake on keyboards and Niall Hone on Lead/rhythm/additional bass the line up was completed with Richard Chadwick on Drums.

'Sentinel' brings the girls back out once again but this time on stilts, to walk among the crowd like something out of war of the worlds. The band then pick up the pace with the brilliant 'Angels Of Death'. I have always been a massive Huw Lloyd Langton fan but Niall Hone who joined in 2008 fills the spot brilliantly, playing superb lead guitar. However one must not forget Brock's abilities in this area and as a result they complement each other perfectly. Ending with 'Brainstorm' I find myself out of my seat, on my sticks singing and dancing along with everybody else.

For a band that rejuvenates like some sort of demented time lord, Hawkwind are at an all time high. For me this was one of the most enjoyable gigs this year and certainly one of the best Hawkwind sets I have seen in 25 years. May the captain steer the ship for many more years. 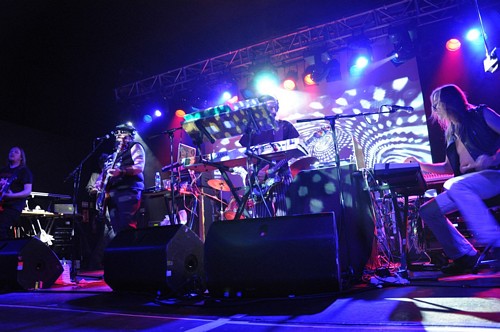