This is an early show for the 02 Academy due to a club night after. I have no complaints; it means there's time for a quick German sausage before home time from the Christmas market next door! Back to the gig though, we miss most of the Sharks waiting to get through Leeds traffic. We do see Chuck Ragan of Hot Water Music join them on stage for a track, adding his gruff vocals to the mix. This is a taster for his set that is up next... 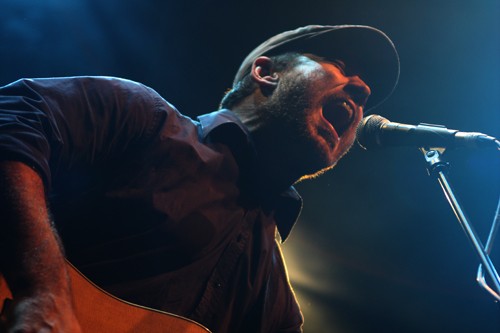 Chuck is a major draw to this show for myself. His work with Hot Water Music is already well known and as part of this leading melodic punk band he can show his flexibility by branching off and performing well written solo songs. He still has the punk delivery, passionate and with those gruff, recognisable vocals, but its stripped down to him and one trusty acoustic guitar. He is joined by fellow Gainesville resident Jon Gaunt on fiddle duties, and boy can he play that thing. This gives a really full sound, with Ragan also slapping his guitar as a drum occasionally.

There are plenty of tracks in this half hour set, mainly from debut album 'Feast Or Famine' like 'The Boat', 'It's What You Will', 'Between the Lines', 'Do You Pray' and 'Don't Cry'. There are nods to Bob Dylan (pre-1965), with a splash of the Pogues when Gaunt is added to the mix. It truly is the way Ragan puts his soul into the performance, a true legend to be. Gaunt's fiddle solo dedicated to a local lad (Ragan plays Leeds venues all the time, as his time in HWM means he has many friends in this Yorkshire city) is a comedy break from the heartfelt songs. This set is so good I forget we are here to see another band! 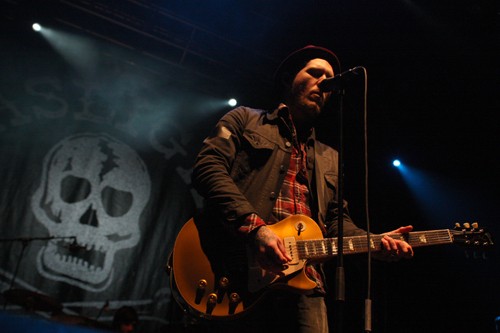 Oh yes, The Gaslight Anthem. This band are getting stupidly famous now; introducing younger fans to the sounds of Springsteen along the way. (The show tonight sold out ages ago). A great number of flat caps are in attendance, it seems like the Gaslight fashion code along with a checked shirt... shame as these guys will have to buy another hat type now Brian Fallon is donning a red trilby Appearing onstage to some random American female rap artists, and miming the words in a jokingly way, the band slip straight into 'Spirit Of Jazz'. The band and crowd are in a cheery mood, all up for some sing-along choruses and Americana tales of the working class.

With three albums under their big buckled belts these New Brunswick blue collar heroes do not disappoint and choose to play tracks from across their discography. 'Boomboxes and Dictionares', '1930' and 'The Navesink Banks' are all present from debut 'Sink Or Swim', but the majority are from new album 'American Slang' and second popular album 'The '59 Sound'. It is tracks from this album that get the crowd really punching the air and singing along with covert precision, namely the title track, played to end the main bulk of the show, and 'Great Expectations'. Chuck Ragan appears on stage to help sing part of 'The '59 sound', taking over from HWM bandmate Chris Wollard who helped the band with recording this album.

The guys don't appear to want to end, playing a packed out encore with nine songs. There has already been a cover of 'Once Upon A Time' by Robert Bradley's Blackwater Surprise, accompanied by a story of this inspirational musician. We are also treated to a cover of Huddy Ledbetter's 'Goodnight Irene', performed with just Fallon, drummer Benny Horowitz and Chuck and Jon Gaunt. Magical indeed. I was expecting a Pearl Jam or Who cover as in the past shows but am disappointed, but this is the only disappointment from these guys who put on a super tight show and without a doubt please this broad spectrum of fans, from young dudes to middle aged couples and beyond. As the sounds of cheering die out after last track 'Backseat', it's obvious that this band are gonna be too big to play this size venue for much longer!

Spirit Of Jazz
Boxer
Boomboxes and Dictionaires
The Diamond Street Choir
Old Haunts
Old White Lincoln
Even Cowgirls Get The Blues
We Came To Dance
Senor And The Queen
Meet Me By The Rivers Edge
Great Expectations
Bring It On
Casanova, Baby!
Blue Jeans And White T Shirts
The Queen Of Lower Chelsea
Once Upon A Time
The '59 Sound 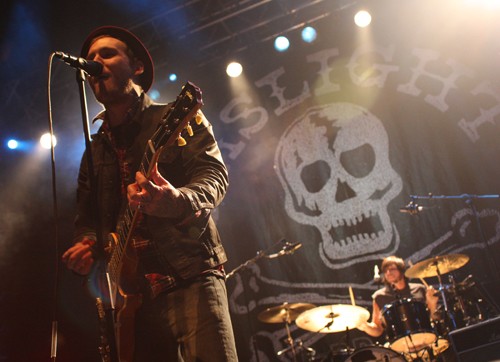