Another Saturday at the 02, another early show. I arrive late for Built To Spill, and am really gutted about this as soon as I am 30 seconds into their music. Deep, moody guitars, rare grunge vocals, winding solos and you would need one hell of a knife to cut the atmosphere they give off, in a good way.
Guitarist/vocalist Doug Martsch has cited Dinosaur Jr's J Mascis as a huge influence on his guitar playing, and you can hear the resemblance in the way the guitars go off on there own in these powerful arrangements but then suddenly shows you that it was there in time all along. Hard to explain. Some people say they can fall asleep through a BTS set, I found them very interesting but indeed relaxing to listen to.

There are not many lyrics embedded in all the progressive indie experimental rock but I could pick out the high pitched words to 'Goin' Against Your Mind' and 'Time Trap', two beautiful pieces of work. I just now need to delve into the bands back catalogue and start familiarising myself with their last seven albums. 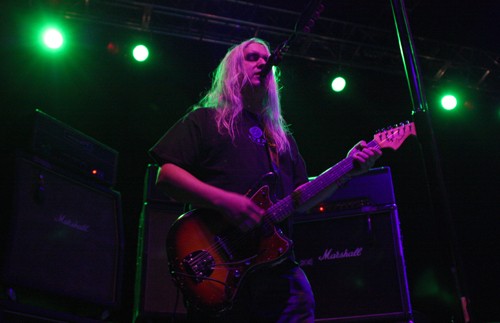 Dinosaur Jr never have much to say, they let their melodic grunge take over. Not hard with the amount of amplifiers Mascis has creating a wall of sound behind him (I'm sure this band have made me deaf in the past. Ear plugs can only work so well...!). There is the odd "Thanks" and bassist Lou Barlow tells us that regular drummer Murph became ill early in the tour so a young man called Kyle is standing in, and he does a great job.

The band do not communicate with each other much either, it is all about the music (I'm not going into Dino Jr past history, very delicate ground). The set list is a broad spread over the band's long back catalogue (minus some material from the album like 'Without A Sound' that were made (as were other albums) with a line up differing from the original three guys here). You never get much of a mosh pit at Dino Jr gigs, many people just appear paralysed by the loudness of the show, or Mascis' drawling vocals, but there are a few attempts at one tonight.

The material from 'Green Mind' (basically a Mascis solo album but always included in these '2reunion' shows) and the debut album 'Dinosaur' feature heavily, with the most popular songs being 'Freak Scene' and 'Over It', and my personal favourites being 'Thumb' (sadly minus the flute part), 'The Lung' and 'The Wagon'. It's good to see this reunion is holding up, as the talented guys are very popular outside of this band (Sebadoh, Barlow's solo work, Witch, J Mascis And The Fog) but Dinosaur Jr's legacy is one worth upholding. 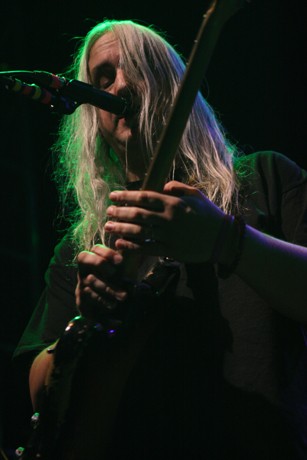