Hyde, Hyde, Millard and Craig; not a fancy pants bunch of city slicker solicitors who would listen to your case whilst charging by the minute, then tell you to wait outside with Mabel the Secretary whilst they ponder how much they can stiff, sorry, assist you, with said case. Oh no, in fact if these guys had been in the firm they would've been more likely to specialise in 'Partnership Dissolution of friends, co-workers and other irritating folk' or 'The Mis-Selling of Employment Contracts to innocent Mackems.' Perhaps lucky then that they decided to ditch the dockets and form a band instead; The Futureheads.

Academy 2 in Manchester was the venue of choice, on a slightly wet yet wonderful bank holiday weekend for the post-punk revival Sunderland favourites. A capacity crowd had gathered in the inky and intimate performance space, pumped and preened ready to hear some old favourites and New New Wave tracks. Taking to the stage amidst huge applause, Hyde and the boys opened their set with new album title track 'The Chaos'. The track and album generally is quite heavier and darker in its punk references, in comparison to its predecessors. This was a great opening track for such a show, which set the standard for the energy and electricity which followed.

Futureheads are a perfect definition of a band that fully adheres to the generic definition of 'indie' as well as its belief in financial independence. After releasing their first two albums, the debut which was self-titled in 2004 and the second 'News and Tributes' in 2006, the band started their own independent record label, Nul Records, following up with 2008's 'This Is Not The World' and more recently 'The Chaos'. Looking back, front man Barry Hyde said that the band had grown disillusioned with major label music business and being under contract were very lucky to be set free by 679 Recordings, allowing them to initiate plans for their own label.

Next up was the popular, radio-friendly new album track 'Heartbeat Song', which was met with the obligatory sing-along and much bouncing around. It would be fair to say I think, that Futureheads follow the typically indie tradition of short and structured songs and lyrics concerning lost love and the discontentment of youth, clearly demonstrated on 'Meantime' taken from their debut album, "you are a decent person and you have a function, so why do we say hello? It's just a fashion that we follow that we should be forgetting"

Similarly, 'First Day', the band's debut single released in the summer of 2003, is a perfect way to introduce the band as lyricists of social observation and working class discontentment. The track's main protagonist narrates the story of his first day at a new place of work; a place that he is told, quite forcibly, that he is lucky to be a part of, lucky to be moving on to the next stage, "lucky, lucky, lucky." Of course, we can detect more than a hint of irony to this modern take on call centres and corporate culture. 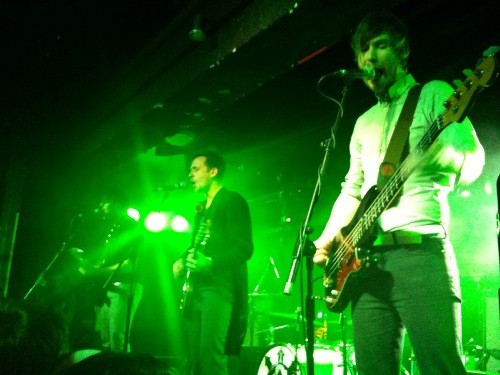 New album tracks suggest perhaps Hyde and the boys have reached an acceptance that everything may not be perfect; in your relationship, in your job, even within your own mind but maybe it's worth working at... but fear not fellow escapism fans; ultimately, discontentment reigns. Good examples of the theme included performances of new album track 'Struck Dumb', "for crying out loud stop following your crowd, stop living in the clouds, go and make your mother proud." and of course new favourite 'Heartbeat Song', "your heartbeat song, it's good but it's not the one, we're singing out of tune, but I still want to sing with you" I wondered whether the band had a new found maturity or had they simply come to view discontentment as a life choice? Some people make a good living that way...

Old classics 'Skip to the End' and 'The Beginning of the Twist' were particular crowd pleasers, as was the highlight of the night for me; a sing-along version of 'Hounds of Love'. Barry Hyde took one side of the crowd, Jaff the other and I am both proud and hoarse in equal measure, to say that Jaff led us to victory. The atmosphere never fell short of being upbeat and uplifting, helped along by the unassuming nature of the front man and general understanding of all in the room that we were there to celebrate seven years of a great band with great songs, which still sound great today. So to conclude, I had to ponder; is there ever such a thing as a revival in music or is it just a continuation of what went before? Who's to say that something has to end before other people start doing it or before it is done in a different way?

In the case of The Futureheads versus the music business; I rule that the latter is a better place for having the aforementioned in it and long may they continue their reign as kings of the Mackem kingdom and beyond.
article by: Shelley Hanvey
photos by: Zoe Jane Lawson
published: 05/05/2010 17:57


more about The Futureheads
more about Academy 1, 2, 3 & 4 (Manchester University), Manchester