"Let's have some fun, this beat is sick; I wanna take a ride on your disco stick."

A statement I am sure we have one and all uttered during a particularly heavy and hazy night on the tilesif we also happened to be living in eighties New York, were light years ahead of our time with our catalogue of American street slang and, for our own reasons, happened to be at that very moment channelling Leo Sayer. A lady who could and most probably does lay claim to all three is Stefani Joanne Angelina Germanotta or Lady Gaga for our fatigued friends; who in Manchester this week was anything but.

Support came from Gary Go the singer-songwriter from London with recent hits including 'Wonderful' and 'Open Arms'. Go's songs have been receiving a considerable amount of airplay at the moment, due to a prominent support slot for Take That during their current 'Circus' tour across the UK. Go's blend of melodic pop-rock was warmly received, however it was clear that the crowd had come to see one person and they would quite happily let Go go to get a few more minutes with Gaga... confused yet?

Fresh and fit it would seem after her displeasing disappearing act at the Take That shows a couple of days prior, Lady Gaga took to the stage after introducing herself as Candy Warhol, just one of the many flashes of her performance and creative art influences. The sold-out venue was stuffy and steamy bestowing an Ibizan dance club feel and with glow-sticks aloft the crazed crowd began to chant and scream. Opening with electro-pop favourite 'Paparazzi', Gaga was greeted with a loud roar of appreciation and it became clear that the night was going to be rather memorable. The stage backdrop featured a collage of fashion and Gaga brand-inspired images and statements including a welcome to the 'Haus of Gaga', a nod to the star's creative production team, responsible for creating some of her outrageous outfits (including a fire blasting bodice), balmy bonce and sexed-up style.

Before breaking in to the addictive hooks of 'Love Game', Gaga told the crowd that this was her first headline show, which drew much applause and appreciation. Obviously not averse to pushing boundaries for her art, Gaga's show was colourful on many levels, perhaps a blessing that the Academy was an over 18's venue... I have just read that back and am slightly disturbed at my all too evident hurtling towards middle aged-dom as I approach thirty! Gaga told the crowd that all the songs from her critically and world-renowned debut album 'The Fame', were written about her friends in New York. Next up was 'Beautiful and Dirty Rich' ...lucky friends.

Album title track 'The Fame' and 'Money Honey' followed, giving the crowd yet more opportunity to shake their groove thing or similar hip phrase. Gaga invited the audience to sing along to 'Eh Eh (Nothing else I can say)', a particular favourite of mine and clearly the crowd. Speaking of which, it seemed at a cursory glance that Gaga's Manchester fans were a mix of excitable young twenty-something females and gyrating denim and vest-clad bouncy males... 'Boys Boys Boys' was therefore a sure fire crowd pleaser.

A rest from the high-energy dance beats came with 'Brown Eyes' which Gaga performed sat at and then stood on top of, a piano. The double hit of 'Just Dance' and 'Pokerface' was met with deafening applause and was clearly what the crowd had been waiting for. Mobile phones and cameras were thrust in to the air as the room became lit up and everyone sang along to her first two chart-topping tracks, the first of many I am sure.

Gaga's talent for writing exemplary synth-based dance tracks is well known in the industry, having composed hits for Britney Spears, The Pussycat Dolls and Akon, rather impressive at the tender age of 23. You certainly get the feeling that she will be around in some form, be that as artist, songwriter or producer, for a very long time.

After the show, I couldn't help but ponder the choice pairing of Take That and Gaga at their shows this month; the Manchester man band with their very much fantastical family-friendly affair versus Gaga's fervid "Motherf#$?ers" fraught antics. It would have been interesting and I suspect entertaining to see how her set would have been received, as I am in no doubt after this show that the reaction would have been highly positive and for that I fully understand the fans' disappointment and subsequent frustration. I feel with this type of situation swift and seemly damage limitation is required, but for me, the jury is still out on this one. An impressive and inspiring high-energy show, I just hope the cloud of unrest clears over Manchester and all her fans get the chance to see her live sometime soon. 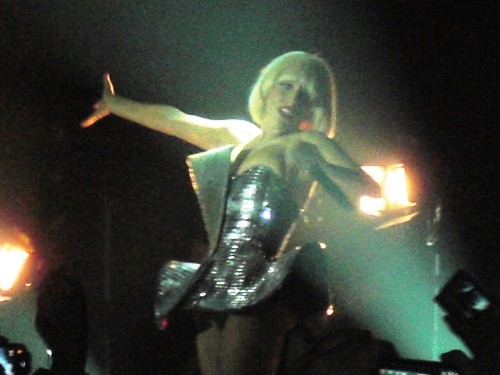