As Oliver Martin (Ashton Kutcher) said to Emily Friehl (Amanda Peet) in an especially brilliant 2005 indie rom-com, "Well, if it wasn't love, it was a lot like it"; a perfect way to describe the atmosphere and acknowledgement of the crowd after witnessing something rather special courtesy of the captivating Mr Hales, or Aqualung to his friends and followers. It was, in fact, the same aforementioned summer smash which first introduced me to the delights of the Southampton-born singer-songwriter; both film and artist possessing the same indisputable quality  a superb soundtrack.

In a venue both cloudy and compact, the stage had been set for an intimate affair as Foreign Slippers made her entrance to welcoming applause. The Swedish singer-songwriter performed a number of tracks which effectively set the tone for the evening; the crowd was both bright and blissful. Next came the wonder that is Kaiser Cartel. A duo hailing from Brooklyn, New York, Courtney Kaiser and Benjamin Cartel made a definite impact with their mix of bittersweet harmonies and folk-rock beats. Performing tracks from their debut album 'March Forth' including, 'Oh No' and 'Inside Out', the duo proved just how they had managed to secure producers such as Aqualung and Sigur Ros on their debut offering.

A particularly memorable moment was when the band decided to reach out, all too literally, to the crowd below. Perhaps they had been unaware, or perhaps they just found it too amusing to resist, but guys  us Brits shy away from anything slightly resembling close proximity, both physically and let's be honest, emotionally, so the prospect of being serenaded in front of a room full of strangers is akin to being asked that much dreaded and ever dependable question in meetings "Can everyone please talk about themselves for five minutes and tell us a really interesting and unbelievable fact about yourselves" ...erm ...no, which means I am clearly very uninteresting, totally predictable and prone to selective mutism after a period of 120 seconds... I digress, to conclude then, with a softer White Stripes sound infused with piercing vocals from Kaiser, I would definitely recommend their subsequent album 'Okay (and other things we feel)'. 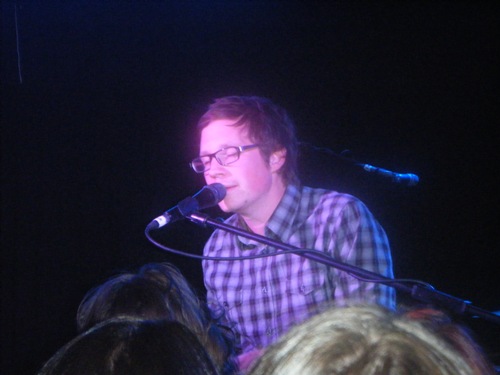 I had a feeling that this would be a memorable evening and I wasn't wrong. Hales took to the stage to warm and excitable applause, kicking off with the beautiful track 'Arrivals' from his latest 2008 album 'Words and Music'. From the opening line, it was clear that Hales was amongst ardent fans who sang along enthusiastically with every line... some louder than others post beverages! Hales managed to evoke a real connection with the crowd with his chatty banter and laid back demeanour, explaining his notable absence from live performances over the past couple of years. Hales told the crowd that this was only his second show in two years, having taken a break to spend time with his family and friends. Hales joked that the crowd could expect a few forgotten verses, which did not pose a problem courtesy of a Mr Kim Smith; a staunch fan who, Red Stripe in hand, provided accompaniment on several tracks.

Hales' second chosen track was 'Easier to Lie' from the 2005 album 'Strange and Beautiful'. A particular favourite of mine, this track would and indeed has lent itself well to several soundtracks, with its powerful harmony vocals and emotive crescendo. Similarly, with 'Something To Believe In' from the 2007 album 'Memory Man', it was clear to see why the track had been so well received by those American teen-angst, high-gloss primetime offerings.

Several tracks followed from 'Strange And Beautiful' including, 'If I Fall', 'Another Little Hole' and 'You Turn Me Round', all seemingly crafted with ease, featuring effortless falsetto moments and beautiful hooks. Hales' vocal abilities are serene and soothing and he clearly wears his heart on his sleeve in the song writing process. Comparisons with Coldplay and Keane have been well documented, although I feel Hales has the edge both vocally and personably. 'Pressure Suit' was particularly well received by the crowd, before a comic moment from Hales; a competition had apparently been posted on his website asking fans to submit topics on which he would later pen a track. Topics included 'Mr Mandy Jones', 'MP's Expenses' and 'an Italian man from Doncaster'. True to his word, Hales proceeded to perform said track or 'rock opera' as he described it, leading to much laughter from the crowd.

The crowd were certainly under his spell as he performed one of his stand-out tracks 'Strange And Beautiful'. Featured on a popular Volkswagen Beetle advertisement, this is perhaps Hales' most well known offering. The haunting piano ballad never fails to mesmerise, as the evening slowly but surely drew to a close. Asking the crowd which track they would like to end with drew requests both old and new, however the clear winner was 'Strange and Beautiful's 'Brighter than Sunshine'. The crowd sang along with Hales' extended version which they had all clearly been waiting for. The best was truly saved till last.

Hales has been reported as stating that after 'Memory Man' was released, he began to feel disconnected with the road he was heading down, or perhaps being led down. Hales said that he took some time out, before deciding to carry on but on his own terms. This desire to do things his own way was reflected in the overall feel of the show with its lack of contrivance and formulae. Hales genuinely seemed to be performing not just for the enjoyment of others, but also of himself. The tracks were old friends and we were all thoroughly enjoying getting reacquainted.
article by: Shelley Marie Hanvey
photos by: Shelley Marie Hanvey
published: 22/06/2009 15:30