Arriving at the venue a little late (my camera has finally died on me, and a frantic search for a replacement has not come up trumps) we catch a few songs by Ella Edmondson. She has a sweet voice that reminds me of Kate Rusby (who has provided backing vocals on her album 'Hold Your Horses'), and is helped along by Andy Dinan on the fiddle, giving an extra layer to the songs, mainly about bad relationships (hopefully not autobiographical). 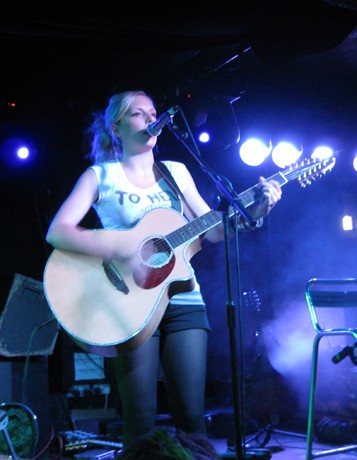 The melodies are excellent, Ella is an engaging performer (this probably comes from her two famous parents), the only grip I have is that many of her lyrics are repeated, but she has only just started out on her song writing path, so I expect nothing but great things in the future if this is the starting point. Title track 'Hold Onto Your Horses' is a catchy tune from mum Jennifer Saunder's TV show Jam And Jerusalem, and finishes the set (well, what I caught of it) nicely.

The Bad Shepherds are a fantastic avenue for Adrian Edmondson to continue his musical roots. No stranger to performing with tunes and ditching the rubber frying pans, here he is with a trio of superb musicians to perform well known punk songs with a folk twist. The thoughtful arrangements of these instantly recognisable songs make the originals hard to figure out at first, once the lyrics appear, mainly from Edmondson's quite strong voice, there is a collective "Ahh, got it!" from the crowd. Some of the words are now more clear to understand too, showing their urgency in a sad way.

Not many were present for Ella's turn on stage; I for one wish I could have seen more, but this rare sunny weekend must have kept many outside until the last minute. The place is soon becomes filled out with a mixture of new and old punks, folkies, and Bottom fans. More air conditioning is needed for the baby Academy room, as it is very stuffy. 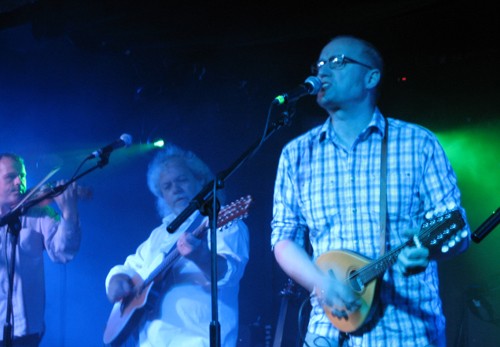 The setlist runs pretty much like the running order of the album 'Yan Tan Tethera Methera'. The title means to count one to four in a rhyme from Northern England and beyond used to count sheep, with a Celtic / Welsh background. I'm not saying anything... Or as Edmondson says "Exactly what the Ramones would have shouted if they where from Cumbria." This amusing title may make out that The Bad Shepherds are a comedy band, but they are far from it. As soon as the music starts the quality of the sounds are amazing, well played and sung.

'I Fought The Law' sounds mightily different to the Clash's version, though Joe Strummer would have liked it, being in the Pogues for a while. Other songs covered are by PiL, the Sex Pistols (Edmondson's favourite band and the concept behind Vyvyan in The Young Ones), Squeeze, the Undertones, Jam, Thin Lizzy, The Ramones, Talking Heads and Kraftwerk! After 'The Model', Edmondson states "German dance pop as you've never heard before!!" They are to punk as hillbilly's Hayseed Dixie are to rock metal.

Of course in between the glorious punk folk Edmondson has taken to re-writing some of the Bible's psalms (with bad shepherds in mind) with comic references to sheep and wanking (I can picture Ella's eyes rolling in her head, watching her dad from the back of the room). He spies someone with a camera and like many artists asks them not to put it on You Tube as it has to last the whole tour!

It feels like such a pleasing show, with the genre defying music well played with a wealth of stars from the folk scene; Maartin Allcock from Fairport Convention and Jethro Tull on bass and 12 string guitar, Troy Donockley, who has worked with Maddy Prior, playing astounding Uillean pipes, cittern, and whistles and last but by no means least Andy Dinan, twice winner of the all Ireland Fiddle championships (an it shows). It's Donockley's birthday today so Allcock leads us in singing it to him. 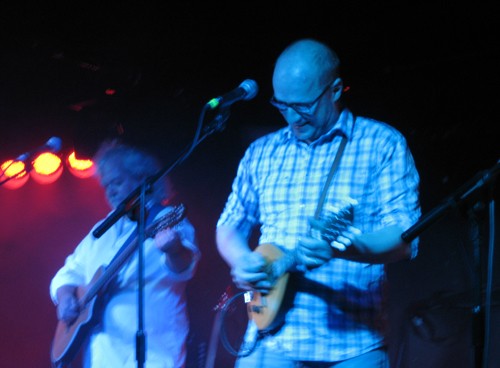 Edmondson's turn on the mandolin (he went to buy a guitar pissed up at a young age but returned with the smaller instrument, leading to the Bad Shepherd's idea), or 'thrash mandolin', is not shabby either. His tuning skills could be improved (whilst trying to multi-task by speaking to the crowd and tuning the mandolin he says "I can't do this through my bifocals!"

Without the comedy the show would have been a great success, but I think many expect it and it's probably hard for Edmondson not to say something funny with his background. It could just be a joke band, but the end result is far too good for this.

Setlist:
I Fought The Law / Cockers At Pockers
Up Against The Wall
The Model
Rise (PiL)
Whole Wide World / Hag With The Money
Down The Tube Station At Midnight
Humours Of Tullah / Teenage kicks / Whiskey In The Jar / The Merry Blacksmith
Once In a Lifetime / Pinch Of Snuff
No More Heroes
(What's So Funny 'Bout) Peace, Love And Understanding
London Calling / Manchester Calling / The Monaghan Jig
All Around My Hat
Yan, Tyan, Tethera, Methera!
Shock Treatment / Blitzkrieg Bop / Sheena Is a Punk Rocker
Up The Junction
God Save The Queen