I have a confession to make, Simple Minds where the first gig I ever went to see way back in 1986 and they became one of my favourite bands, in recent years I have seen them play intimate gigs in small venues, so it was with complete surprise to see them choose an arena tour for Christmas to celebrate 30 years of Simple Minds. Could they still pull it off? 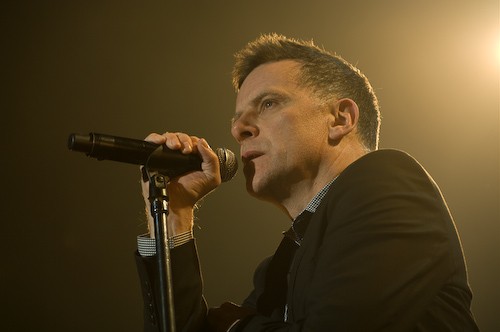 Support band tonight are fellow Scots Deacon Blue, probably now more famous for Simon Amstell claiming he did not who Deacon Blue where, when Ricki Ross appeared on the show. They open up with album track 'Circus Lights' which has a fairly gentle pace to it, early single 'Loaded' follows and the slowness does surprise me for an opening band, 'Real Gone Kid' suddenly makes everyone take notice and people start to stand and dance and continues to do so when a fine performance of 'Fergus Sings The Blues' gains momentum with the crowd. The short set finishes with a great version of crowd favourite 'Dignity', with the audience singing loudly along.

Simple Minds arrive on stage to a huge cheer, looking around there are many blocks of empty seats, particularly at the back, this could be due to the credit crunch or lack of popularity of the band, the band launches into 'Waterfront', which bangs and crashes effortlessly from the band, the 'Sparkle in the Rain' tracks continue with 'Speed Your Love To Me' which really does sound great for a song nearing 25 years old, Jim Kerr being the great frontman that he his, tries to shake hands with everyone on the front row and waves as though he knows everyone in the crowd. 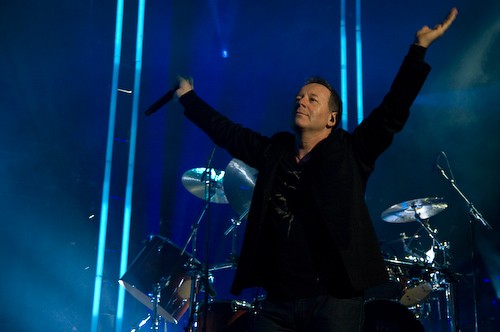 'The Sons and Fascination', and Sister Feelings Call albums are covered with 'Love Song' and 'The American'. The latter in particular still has a fresh edge feel to it.

The set takes a real backward step into the back catalogue with 70's single from 'Life In A Day', 'Chelsea Girl' getting a reworking, featuring Mel Gaynor, the drummer, taking to centre stage to help with the vocals, this seemed to work quite well and certainly gave the song a 21st century feel to it, unfortunately there must only have been a handful of people in the crowd who knew the song so the majority of the crowd stayed silent.

A very long, full on 'Ghostdancing' incorporating Gloria got the fans standing and air punching, Kerr and Burchill seem to disappear from view due to the amount of light coming from the stage which would have been enough to populate the earth with Gremlins had the little gremlin Mogwai been here. 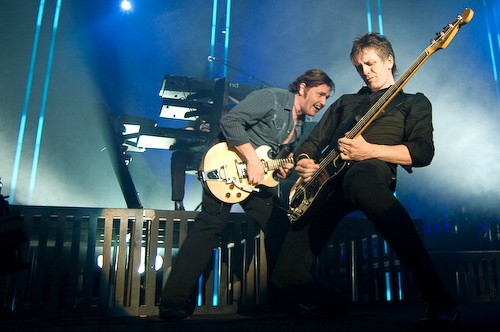 The band have decided for this tour to play the whole album in order 'New Gold Dream (81 82 83 84)', this seems to be a current trend by 80's band at the minute with ABC and The Human League recently doing the same thing on their tours. Over the years the band have come up with many different arrangements for tracks from this album, most improving on the original, so it seems odd that some of the songs have reverted back to their original form, 'Someone Somewhere In Summertime' is one such song which has had a long guitar solo introduction on previous tours, but has been dropped for this one, the lightshow reminded me very much of the classic Newcastle gig from 1982, with heavy backlighting, even the drum and keyboard raisers seem to be in the same place.

'Big Sleep' is beautiful causing hairs to rise on the back of my neck. 'Promised You A Miracle' had a reworked beginning with a jangly guitar effect. Instrumental 'Someone Up There Likes You' is great but most of the crowd don't seem quite sure how to react to it, maybe it's just me being used to listening to my music through an MP3 player but I really did get an urge to skip tracks, to get to my favourite tracks and that lies the problem with this format, the mystery of the gig has gone, I know what is coming next, the element of surprise is lost. 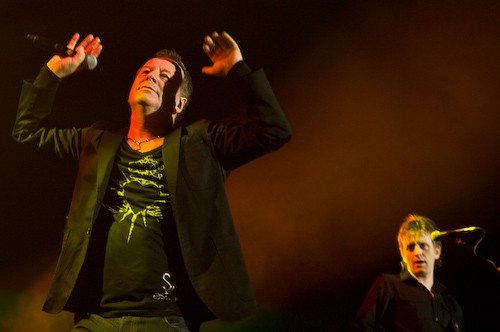 In theory it seemed such a good idea, but had the effect of leaving the majority of the audience in a static state between the well known singles. The musicianship was great, the lights fantastic and matched the mood of the songs perfectly, I just don't think it fits the gig format. The 'New Gold Dream' section ends and the show blasts back to life with Upon The Catwalk', then it's time for the big hitters with 'Don't You Forget About Me' lasting for an age as the crowd sing la la la la la, silence then ensues as number one single 'Belfast Child' is whispered out by Kerr, building up into the ear damaging drum beats from Gaynor, I have never had my ears hurt so much at a Simple Minds gig, Kerr tells us "Good night" and the lights go out.

The crowd bangs seats and stamps, pleading for the band to comeback which they duly do closing with She's A River', a very lively 'Sanctify Yourself' and as always the finale 'Alive and Kicking'.

So does the band pull it off? I have to say I have mixed reactions to this show, The opening tracks are classic Simple Minds openers, but the whole 'New Gold Dream' part had me confused, the reverting back to the original arrangements on some songs where, I feel, a backward step. Whilst the reworked songs just don't fit in. The beginning of the show and encore where classic Simple Minds, I would even go as far to say as good as they were in the eighties.

The band is touring Europe next year and it would be good to see them play one of the larger festivals where they seem to have become the forgotten band of the 80's. 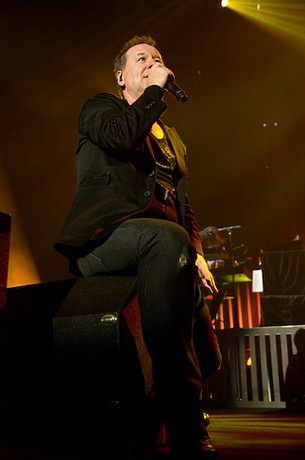