Tonight is a night most Grimsby gig goers have had eagerly marked on their calendars for most of the year since this gig was announced. I cannot remember a time the auditorium has seen the opening night of a tour to a band as large as The Pigeon Detectives, and a lot of the audience are already in place when the stage lights up for Billy the Kid causing a near panic at the entrance doors as the fans think the Pigeon Detectives have made their entrance already. 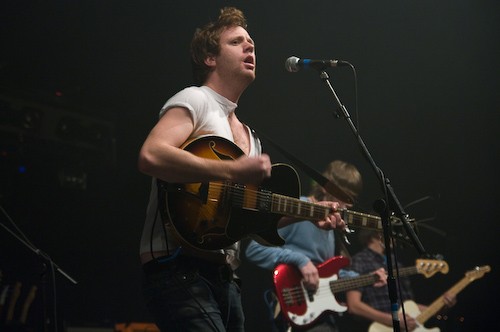 Fortunately for them the first support band take to the stage. Billy the Kid are a six piece outfit hailing from Middlesbrough, with three guitarists, bassist, drummer & a harmonica player they do have a raggle taggle sound, with some decent tunes they got the crowd clapping & cheering which for a warm up act is pretty much job done.

Next up was New York band The Virgins, having never heard of them before I was curious how a band called The Virgins would look, and had already conjured up many ideas in my head which all proved to be wrong! I was immediately impressed with how cool the guitarist looked, with black jeans, black leather jacket all held together with as much as 3 rolls of gaffer tape topped off with a bright red pair of trainers. The lead singer looking cool & confident but not too much to look big headed. The songs driven by a pounding bass had a similar sound to early rolling Stones with gently layered electric guitar. The crowd lapped up all the Virgins could offer and got a well deserved applause after they had finished their set. 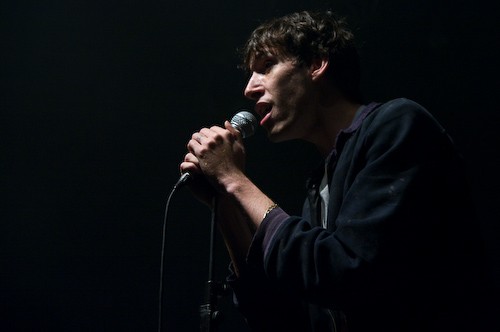 Finally the main stage lights come on as Prince's 'Let Go Crazy' thunders out from the PA, the way this crowd where pumped up they didn't need any encouragement, with crowd surfing already taking place before the band had even stepped up on to the stage. The Pigeon Detectives appear and launch straight into 'I Found Out' with lead singer Matt Bowman leaping around the stage like a man whose life depended on it, from leaping of the drum riser to climbing to the top of the speakers, he really is one of the most energetic frontmen I have seen. 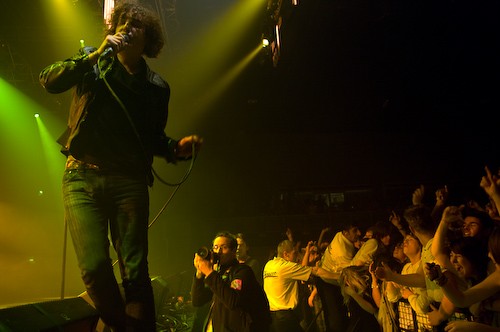 'I'm not Gonna Take This' is quickly followed by 'This Is An Emergency' which sends the crowd into a new height of excitement as screaming girls crushed against the barrier are pleading with security to be dragged out of the mosh pit.

Unfortunately it all very quickly goes wrong for Bowman when he shows his lack of geography skills by claiming it was great to be back in Yorkshire which caused many of the home fans to boo loudly for many of the songs, Bowman obviously did not realise what he had said as he repeatedly shouts "Come on Yorkshire!" which winds the home crowd up even more. Looking round a lot of the crowd has become subdued and started to boo repeatedly and loudly between songs. Bowman eventually redeems himself by apologising for "taking the piss out of Lincolnshire!" I guess it was left to someone backstage to point out the errors of his geography knowledge.

Highlights of the sets for me where 'Say It Like You Mean It', and 'Nothing To Do With You'. The band went off for a quick break and swiftly returned for an encore comprising of 'I Need You', 'Wait For Me and a brilliant finale of I'm Not Sorry' which seemed to sum up Bowman's night well.

All in all The Pigeon Detectives played a great performance with an arena sized, retinal blinding light show, which was only let down by Bowman's lack of geography which angered many of the home crowd, the rest of the fans enjoyed it very much judging by the amount crowd surfing going on and air finger pointing. 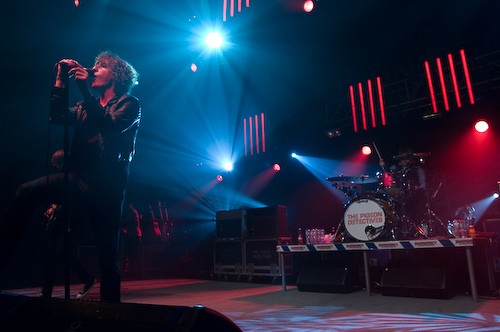 Set list:
I Found Out
I'm Not Gonna Take This
This Is An Emergency
Don't Know How To Say Goodbye
Stop Or Go
Keep On Your Dress
Better Not Look My Way
Can't Control Myself
Say It Like You Mean It
Nothing To Do With You
Romantic Type
Making Up The Numbers
Everybody Wants Me
Take Her back
I'm A Liar
You Don't Need It
I'm Always Right
I Need You
Wait For Me
I'm Not Sorry