We'd been waiting for Cara Dillon's return to the Oxford Zodiac for some months, as her June date was rescheduled at last minute, for reasons unknown. We still got our summer fix though, as Cara gigged her way around various festivals this year. An afternoon slot at Womad's new Charlton Park venue being a highlight of the season with a huge tent of people escaping the blazing heat of one of the hottest weekends to be entranced by her beautiful voice and, husband, Sam Lakeman's keyboard mastery.

So on a wintery October evening, we battled commuter traffic on our way up the M40 to get to Oxford early. Luckily, I had checked the Oxford Academy website a day ahead to check the gig was still on, to find that not only was it definitely going ahead, but rather than taking the usual 9pm slot, Cara's was to play early; as there would be a later performance from Squeeze's Glenn Tilbrook. I'm not sure what resulted in this, perhaps Tilbrook was originally booked for the larger downstairs venue (the Academy rather than the Zodiac). Or it may have been just a double booking. Regardless of the reasons, we safely arrived with minutes to spare before the scheduled 7:30 start, and found ourselves in a rather busy Zodiac.

Clearly, many others had also checked the website, and realising the gig was starting earlier than usual, made their escapes from work, and got their positions to await the angelic songstress.

Cara Dillon, Sam Lakeman, John Smith and James O'Grady made a silent entrance onto the stage and opened with haunting chords of 'She Moved Through The Fair'. With O'Grady on tin-whistle, Dillon's opening vocals grasped the attention of the crowd and I couldn't help but avoid my camera duties and watch in awe throughout this beautiful ballad.

Thanking the crowd for coming to see her and for waiting patiently before Glenn Tilbrook and his 'Fluffers' later took to the stage, Cara launched into one of my favourite songs, the powerful 'Black Is The Colour'. Rapturous reception showed that a lot of the audience had actually come to see her, rather than just await the later set, and we were treated to an evening of songs from forthcoming album, 'Hill Of Thieves', Dillon classics and as well as some more traditional songs. 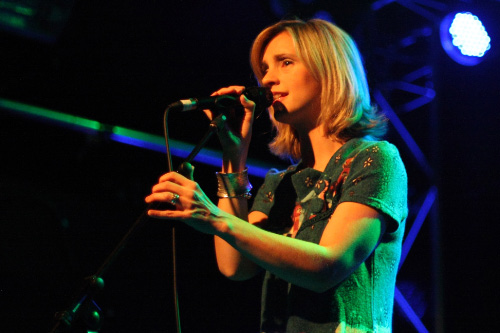 Waking the audience from their entrancement, we enjoyed a number of more upbeat numbers. 'Johnny Lovely Johnny', an upbeat Irish country jig which prompted much whooping and clapping, with Uillean pipes played by O'Grady and tin whistle by Dillon (albeit the 'wrong one', as there seem to be quite a few on the stage). Dillon introduced a further 'wee set o'jigs'; 'Knotted Hanky' written by O'Grady, and 'The Huntsman' written by Lakeman, which she delighted in pointing out is inspired by "Sam's old rural life in deepest Dartmoor", hunting, or 'courting' badgers. Both tracks continued the clapping and knee-bobbing, with vocals and guitar from Smith and more pipes from O'Grady, which many a ceilidh night on the Titanic would have been proud of.

Perhaps worn out by the frenetic jigs, the others took to the side of the stage for a well earned sit-down, leaving Dillon and Smith alone to enchant us with 'If I Prove False'; a soft folk ballad, telling the story of long lost love, connected souls, and someone's fella being eaten by a squid, or turning into a squid, Smith wasn't too sure. A harmonious duet, joining both vocal talents and Smith's guitar playing into a heart-melting tune which you just couldn't help but sway to. Radically different to the gentle Dillon, John Smith's wonderful voice is much akin to a younger Ray LaMontagne, and I look forward to hearing more from him. 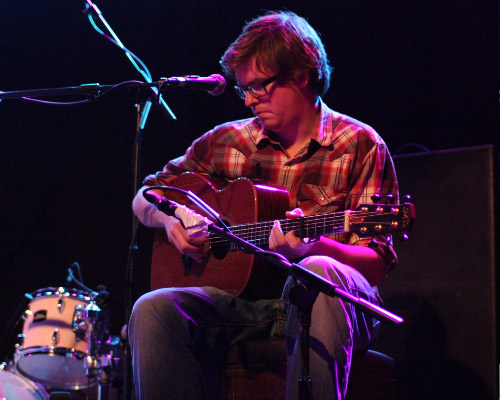 As expected, Sam Lakeman played a big part in the proceedings, having to fill in for the Czech Philharmonic Orchestra on 'Garden Valley', and then take a turn on guitar alongside Smith for another track from the new album, which translated from Irish, means, 'Jimmy Of My Heart's Mind & Treasures', an upbeat ballad of waiting for the return of absent long-distance love, and took Dillon's beautiful voice to even the furthest corners of the room.

Always bringing cheeky humour to her concerts, tonight was no exception. We were told of a weekend back in County Donegal, when Cara, Sam and some 10 others took over a friends house for the weekend for a bit of a 'craic' and inspiration. What came from that weekend of wine and O'Gradys broom-dancing was the lively 'I Wish You Well'. With Dillon then taking a quick drink break, Smith was left to address the crowd with, "So how are the Glenn Tilbrook fans?" Although receiving much whooping, this made for an uncomfortable fill and Cara was back and not letting Smith make his quick getaway, but challenging him to carry on...

The banter was set to continue, on all sides. With each having innocently mocked the other at some point during the evening, Lakeman delighted in describing 'Hill Of Thieves', a jolly tale of the legend of the hill back in Cara's home town, as being all about 'Bandit Country'. With us now both laughing, and mesmerised by her voice, it was all too soon for final track, 'P Stands For Paddy', a toe-tapping folk song with a catchy chorus for the audience to join in with, and knee-bobbing a-plenty. James O'Grady closed the song with superb pipe chords, and even got his fiddle out to bring a brilliant country folk song to a poignant finish.

With the next act due on stage momentarily, there was time for a very brief stage exit, before returning to give a round of thanks to the Glenn Tilbrook fans whom had waiting so patiently and not even talked through the quiet songs, and for being a "brilliant crowd altogether". Then, alas on to the encore of 'The Parting Glass', a gentle finish to leave a lasting impression of Dillon's vocal talent, to soften even the hardest Tilbrook fan. A wonderful close to a brilliant set of heart-softening ballads and uplifting jigs, and off we went to enjoy the culinary delights of Oxford's Cowley Road.

Set List:
She Moved Through The Fair
Black Is The Colour
Johnny, Lovely Johnny
Knotted Hanky
The Huntsman
If I Prove False
Garden Valley
Jimmy mo Mhile Stor
I Wish You Well
Where Are You Now
The Verdant Braes of Skreen
Hill Of Thieves
P Stands For Paddy