Entering the newly refurbished Leeds Academy (the old Town and Country venue to oldies like me) we can hear the strains of Million$Reload, an Irish band perfect for warming up the evening. Unfortunately I arrive to hear the last of singer Phil's strong warbley screams fade out, so I can not comment much about them. Only that that's one hell of a warble...

No matter, it's Terrorvision I'm here to see. The Keighley lads are back again, after the success of their Lost Weekend earlier this year, they are back with a few dates for the Lost Weekend II, with this venue as the closest one to home. There's many an established fan here; I recognise a few from the Holmfirth show last time. The Academy's high stage means all can view the stage, meaning there is no pushing down the front (though people are still having a ball dancing about), and the lighting is very complimentary to the high octane rock of the night. 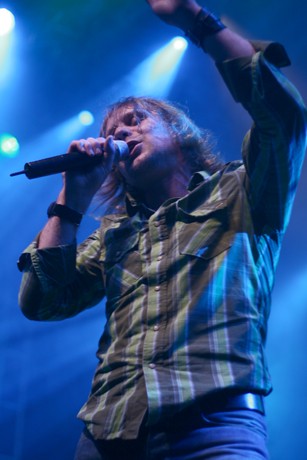 After a slight delay Terrorvision, a name that never suited their appearance as cheeky chappies, take to the stage. There's no breather, it's straight into the first song of their first album 'Formaldehyde', 'Problem Solved'. The set is a fine mixture across the five albums; there could have been more from hit album 'How To Make Friends And Influence People', but this is probably due to the fact that the band are playing the album in its entirety next April for its fifteenth anniversary. 'New Policy One' is a great way to remember their yesteryear tracks, and even the songs that didn't have as much sparkle for me ('Celebrity Hit List', 'Sometimes I'd Like To Kill Her') are welcome tonight.

I do believe somebody backstage winds singer Tony Wright up like a clockwork toy and sends him off on stage; he is so hyper. At forty years old, he has lost none of the energy the band had fifteen years ago. Neither has the other guys, but watching Wright makes you feel young again too. Probably an old raver at heart, he even pushes his palm in the air for slow tracks like 'Middleman!

After a lengthy set list that some would call enough and end the show on, the guys come back to sit on chairs... a first for them I reckon. Maybe age is getting to them slightly. No matter, as the chairs are the scene for a few jazz versions of some favourite tracks. The reworking of 'Discotheque Wreck' is brilliant, but one thing I have to say is that they should have only played the song once, not like they did (the rock version earlier on, followed by this catchy jazz rendition).

Frankly I have always hated their song 'Tequila'; it is a horrid contender for 'the cheesiest annoying pop song ever' in my opinion. Tonight's jazz mix is amazing; they should as Tony says release it as a single. I think I like the song now... 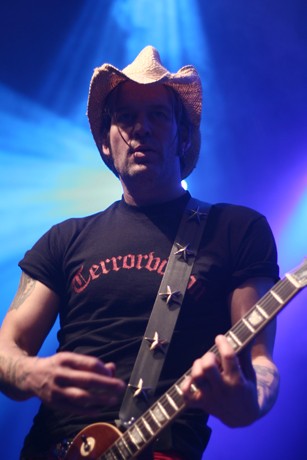 After a couple more it's back to the rock, with the band finishing on 'Alice What's The Matter' and finally 'Oblivion' (doowapbabaoowap!). I can not wait until next year to hear the full HTMFAIP album; this show has just giving me a craving for Terrorvision like I had in the nineties. 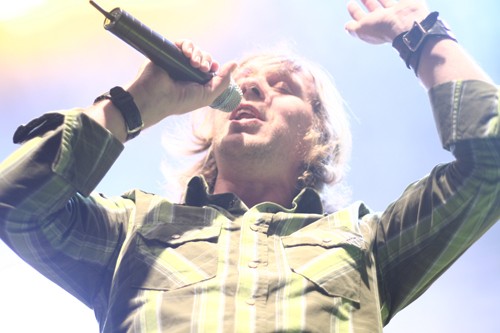 
more about Terrorvision
more about O2 Academy (and Underground), Leeds