With the critically acclaimed experimental outfit Hush The Many (Heed The Few) now having officially broken up, tonight found former front man Nima; taking a big step into the unknown; and headlining at the Scala with his brand new band - Arrows Of Love

There were still traces of his former outfit in the set tonight. The hour was peppered with the band's newer material, which had in reality, been gravitating away from the tenderness, spacey innovative guitars, hushed lows that had held mesmeric power to reduce a venue to silence - towards a more confrontational, restless sound.

Tonight though, the subtlety and layers of warmth have vanished, which feels like a gut-aching loss, to be replaced with a raw, dynamic energy and intensity, overblown at times, but not off-putting. This is a band with promise, but it's not Hush The Many mark two. Nor could it be.

Supporting the Arrows of Love, tonight were Beans on Toast and Wild Boar. The first, no doubt named after a meal beloved of students on a budget everywhere, and the second - a thrash heavy metal outfit surprisingly, but confidently fronted by talented, singer-songwriter Ed Harcourt. 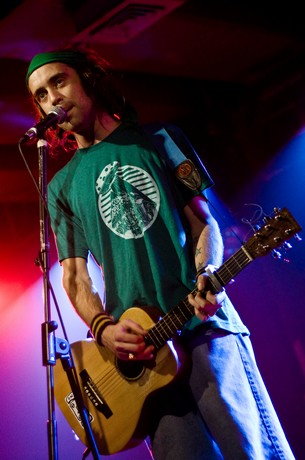 Beans on Toast is in reality, Jay Towers and his acoustic guitar. Tonight, he was perched on a stool clad in cut-off jeans and candy striped socks. The crowd, were by turns amused and engaged by his anecdotes and sly wit, in-between camp fire folk songs that touched on drugs, love and politics. Observational, and tongue in cheek at times, he tells us it is pointless to worry about the credit crunch in 'The Price of Rice' singing, "don't worry about it, just try your fucking best..."  maybe we'll all live a little longer if we follow that little maxim. 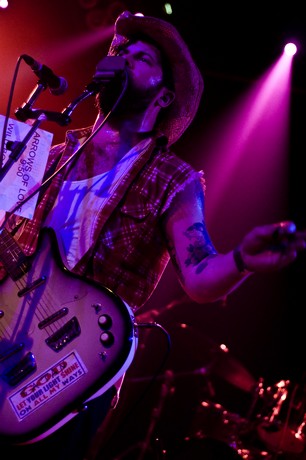 Wild Boar on the other hand, were clearly here to rock, and rock hard, and that is exactly what they did. Comparable to Motorhead, with a dash of melodic bent stolen from The Pixies, they were conceived by Ed Harcourt, when he woke up one morning, and decided he didn't want to be piano playing troubadour 'Ed Harcourt' anymore. Tonight, was a chance to share the music beyond the confines of secret gigs during Meet The Greek when the band would headline after a day of free talent to the lucky few who know it was the place to be.

With songs as gorgeously thunderous as 'I'm In Love With My Therapist' with its quizzical quandary "I'm in love with my therapist, if I fuck her will she anaylse my performance?" and madly intense drumming supplied by rock producer Dimitri Tikivoi on drums, crazily intense guitars from Harcourt himself, the elegantly Dickensian clad Andre on bass and the masked Emmet Elvin also on lead, it's an immensely pleasurable song, if you don't mind the threat of tinnitus hanging over you.

They were loud, irreverently lyrically fun, and though well received especially by those at the front, the contrast might have been too much for those at the back - who you could sense were slightly agog at this secret side of Harcourt.

'Henry Rollins Neck is Bigger Than His Head', has an almost sleazy insouciance to it, which wouldn't sound out of place in Larry Flynt's Hustler Go Go bar. Harcourt himself, clad in hill-billy clothing, worked up a sweat that Bruce Springsteen would have been proud off, and after the escalating cacophony of sound that was 'Satan Made Me Do It' they were gone. 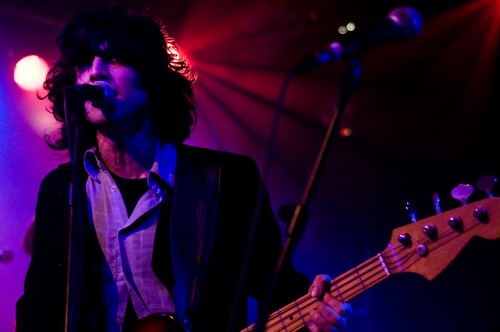 Arrows of Love took the stage to a reassuringly packed venue, and they open with a track that Hush The Many had begun to close sets with; a break neck speed, squealing guitar heavy song called 'The Illusionist', which culminates with Nima screaming "daaaays" in a howling, throat shredding climax. It's pretty spellbinding.

Three elegant girls and three disparate boys, between them played out songs inherited and reinvented from Nima's past, and a new handful being shaped for the future. Tonight, they played their fifth ever show to date. In this context, it was genuinely impressive. Kate on cello, performed with determined confidence, Sarah on keyboard, vocals and guitar swapped instruments with ease, guitarist Luis played hard, and drummer Wim kept it tight.. Nima, prowls the stage like a restless tiger, but still remembers to charmingly connect with this old/new audience.

'The Knife' featuring guest vocals from the extraordinary Bethia Beadman (Courtney Love's band) proved to be the highlight of the set. Clad in sparkling shoes and possessing at Diamanda Gala-esque lamenting wail, this transcended any version previously performed with Hush The Many. The song, a tale of love gone sour, shattered trust and blood, never sounded so achingly fine. It was a perfect pairing, and hypnotic viewing.

New song 'Prescriptions' with its scary litany of chemical side-effects, "this may lead to blistering, avoid contact with skin and eyes" could become something extremely special. It feels innovative and oddly retro all at the same time. Reminiscent in parts of The Smashing Pumpkins, as is the dreamily keyboard lit track 'Trust', the new songs showcase what is unique about Arrows of Love; the desire like all fledglings, out there to fearlessly flex limbs and explore.

By the end of the night, Nima's acoustic guitar is down to four strings and the audience have wildly applauded bassist Emma for braving her first ever gig. There is an emerging chemistry, which only time will tell what depth it has to truly offer, but if tonight was about laying new musical offerings at the feet of ardent Hush The Many fans, then by virtue of the applause for an encore, they have a right to feel positive.
article by: Yasmin Selena Butt
photos by: Tom Armitage
published: 17/10/2008 14:13