Gutted that I missed their set at the Pinkpop Festival at the weekend due to queuing for a wristband, I finally get to see Flogging Molly, a band that have eluded my live calendar for some time.

Pepper's mix of reggae, ska and rock is maybe not what the Irish punk loving crowd are into, but plenty of people are watching the trio from Hawaii. Their sound is not that original; bands like Capdown, The King Blues and originally The Police have all perfected the rock/reggae sound, with better effect.

Though a good live band and very engrossing to watch, like I say their songs are not structured in an amazing way, they just seem like another new wave punk band adjusting their music to suit todays youngsters, and therefore in the end to boost sales. And the drawn out ending is a little pompous...

Flogging Molly on the other hand are another kettle of fish altogether. They have definite influences of The Pogues and The Clash (they dedicate 'Tobacco Island' to Joe Strummer). Yes this has been done before, with the Dropkick Murphys and Neck, but the inclusion of Dubliner Dave King on vocals gives the large band a comedy front, as his jokes are very witty and delivered quickly, like their punk style of music.

Crammed onto the stage are seven members and instruments ranging from your normal band set up to accordion, fiddle, tin whistle, pipes, spoons, mandolins and a banjo. Phew! No ukulele but King says that his cheap guitar sounds like one. 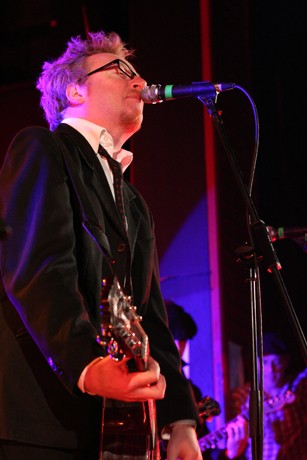 It is impossible to stand still at a Flogging Molly concert. The amount of energy omitted by the band and passed onto the crowd is phenomenal; if you are not clapping your hands or waving them ion the air you are stamping your foot or nodding your head. I have heard a few songs before, such is tonight's broad setlist, but find myself singing along to song choruses that are new to me.

'Drunken Lullabies' is an obvious favourite, a great song for downing a Guinness to. Other crowd favourites (I don't think there aren't any really) are 'Rebels Of The Sacred Heart', 'If I Ever Leave This World Alive' and the speedy tin whistle melodies of 'Devil's Dance Floor'. 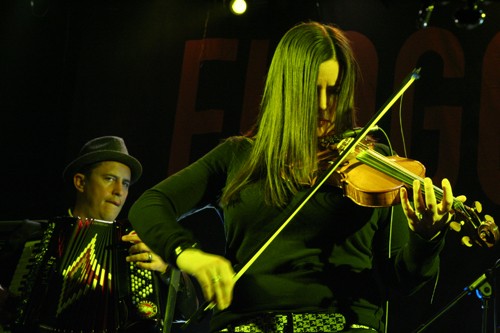 After asking if there are any redheads in the crowd, and then making a joke about the green haired folk in the crowd ("I bet it's red underneath!") redhead himself King comes across as an Irishman that likes to joke and take a joke, as he rips the piss out of band members and crowd members, but it's all tongue in cheek and if any people are offended (I didn't see any but it was dark) then they shouldn't be at this sort of gig.

I will definitely be updating my record collection with a few Flogging Molly CDs now (to learn the words for next time!), though the songs are much better experienced live, with a mixture of cider, Guinness and beer thrown in your hair. Watch out for them at the Reading and Leeds festivals, their only other known UK dates this year. 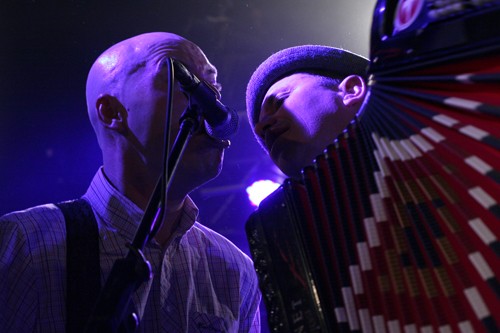