Hadouken! are lumped together with bands such as Enter Shikari and the Klaxons under the typically ambiguous name of 'New Rave'. You know, that music that you rave to, what is new. This time round, however, the lead singer James Smith himself commented on the fact that the crowd were somewhat older, and less glow-stick happy. He celebrated that this meant that Hadouken! Had transcended the confines of the definition New Rave and had become "Just Hadouken!" 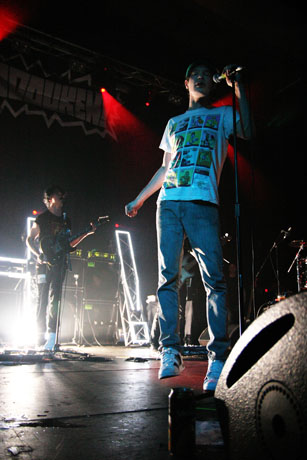 No matter what the crowd were like, though, Hadouken! Remain the same in terms of sound, that is, aggressive indie rock accompanied by plenty of Grime-esque synths. The music has a lot of energy and the bands enthusiasm for it cannot be denied. The conversational way in which James Smith communicated with the fans, as well, reflected their humble beginnings despite the bands growing popularity. The crowd reacted well to this. All dressed up in clothes that look like the Daft Punk robot had thrown up on them, the horde of early teens were dancing with such unanimous fervour and disregard for each other that the whole thing became very dangerous for anyone trying to hold a drink.

The set list seemed to be appreciated. Most of it consisted of songs from their debut album 'Music for an Accelerated Culture' which is no doubt a nod of the head to The Prodigy's 'Music for the Jilted Generation'. This sly comparison between Hadouken! and the genius that is The Prodigy is something they should really avoid, mostly because Hadouken's music is, if anything, a poor reflection of what The Prodigy were doing years ago. In fact it served no other purpose (for me anyway) than to further accentuate this comparison (or lack of) when they covered 'Breath', which, although nothing on the original, sadly was the best song of the show. 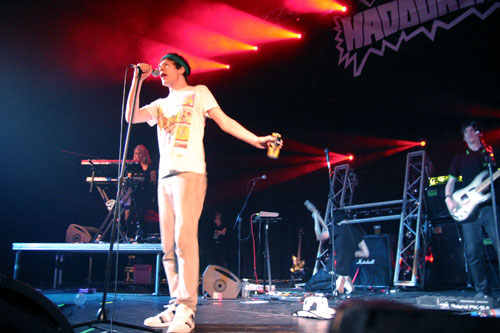 And that's where the show was let down: the music. Hardly a small thing! Hadouken's sound became very quickly repetitive despite the fact that they only played for an hour, and the constant appeal to the young crowd made it feel like if you were over fifteen you didn't really belong there. When introducing the cover of 'Breath', for example, James Smith calls out "This is what I was listening to when I was fifteen!" which came off as somewhat patronising to anyone who wasn't that age. But, then again, perhaps the reason the show wasn't enjoyable for me was because the music, and so the live performance, are aimed at a younger audience.
article by: Robert Knowles
photos by: Bryn Russell
published: 09/05/2008 15:39