The Presidents Of the USA / Kid Carpet / Electric Eel Shock

When the Presidents of The USA play a gig you know the support are going to be unique, in this case very unique. Three of the funniest musical acts are about the take the stage, resulting in many cases of tickled ribs and sore (facial) cheeks.

Kid Carpet has two sets tonight, one being a mini warm up before the next band. We arrive to catch his comical take on Van Halen's 'Jump', but without his trademark Fisher Price guitar. This must be appearing later.

Electric Eel Shock are just a fun rock and roll band. The three lads from Tokyo just don't give a shit; they throw their guitars around and perform some acts that are quite wrong to do to an innocent stringed instrument.

No this could easily be seen as another rock band that play a few of the classic riffs ('Sweet Child Of Mine' etc) in-between songs, but to play their tools so proficiently and still arse about a lot on stage takes some doing. 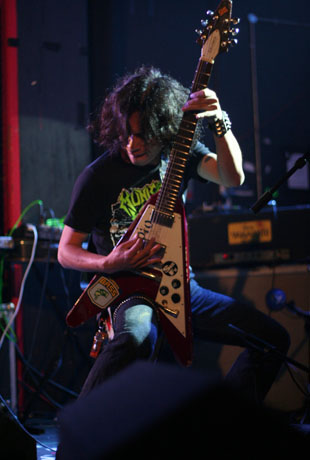 The highlight; after a speedy cover of Black Sabbath's 'Iron Man' (obvious heroes of theirs) it's onto a few originals, the best being 'Bastard!' (featuring repeated shouts of "You Bastard!"). It's not surprising that the band are a little screwed in their lyrics and song names. Drummer Tomoharu Ito, who used to appear onstage wearing a third sock (I'm not saying where) used to make false teeth, and singer Akihito Morimoto is a competition angler (probably leading to the song 'I Love Fish But Fish Hate Me').

All I can say is that you WILL enjoy a show by these shockers; their grasp of the English language may not be top notch but it all add to the charm, and you will certainly remember them.

Kid Carpet is back for his main set, but it only a few songs long. Kicking off with 'Bristol Carpet Factory' (his sampling wonder of a carpet ad) Most of these songs are new, and feature less pratting about with jacked up toys and old casio keyboards. That's not to say the casio isn't used; but many of the samples are pre-recorded (the Furby sound for 'You Love' had to be as someone previously stole the actual toy). 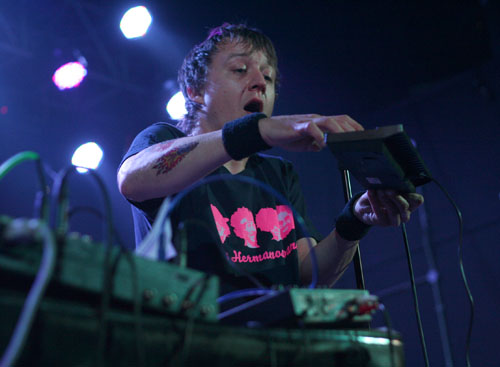 The purple plastic guitar makes an appearance (to everyone's amusement), and songs with random lyrics like 'There's A Shoe' just add to the fun. It is a shame the kid (real name Ed Patrick, an anagram of Kid Carpet for you fact-finders) can't have longer on stage now that people are watching. His bouncing energy and on stage confidence (even to the one heckler) win everyone over though, no matter how long he gets to play. Another must to check out.

Finally, after plenty of fun already we are spoilt yet again by the Presidents Of The USA; the original pranksters of punk. Some bands have the odd song with no meaning but PUSA take it one step further, and have maybe one song that has a serious note to it (I don't know it, but they must have?! The name is not even meant to be political). 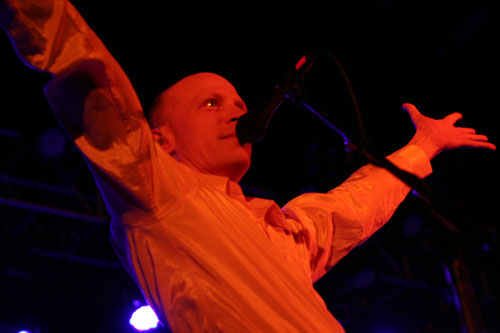 Bugs, cats, peaches, friction, it's all covered by the Seattle trio. Whereas Seattle's "big four" Pearl Jam, Nirvana, Alice In Chains and Soundgarden were all amazing but a bit gloomy (to say the least), PUSA's funny lyrics coupled with heavily catchy melodies lightened the mood. Many did not take them seriously, and other thought they made a mockery of music at the time, but they were an original band and a breath of fresh air with their brand of funky alternative rock.

The basitar and guitbass are back (guitars with either two (bass) or three (guitar) heavy gauge strings, tuned lower) to give that Presidents sound. Original guitarist Dave Dederer has not toured with the band for years due to spending time with his family, so Andrew McKeag (ex Shuggie, The Black Panties) has replaced him (though nobody will say if it's permanent). It must take a talented guitarist to pick up a drop-tuned three stringed guitar! While many of us are waiting to be reminded of the hits 'Lump' and 'Peaches', other newbies appear like 'Ladybug' (about his girlfriend who is selling merchandise) from brand new album 'These Are the Good Times People' and 'Zero Friction' from 'Love Everybody'. There's plenty from the first self-titled album to keep people happy, like 'Dune Buggy', 'Kitty', 'Boll Weevil' and 'Back Porch', and their cover of The Buggles' 'Video Killed the Radio Star'. These are the songs that the Presidents will go down in history for, as the newer songs still have their trademark sound but are not as catchy and crazy as the first batch. 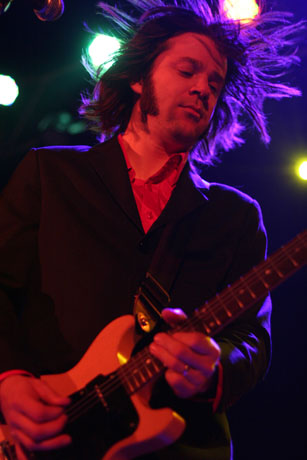 There's a bit of monkeying about onstage, as singer Chris Ballew swings his mic behind his head and sings upside-down into it, and guitbassist (?!) Andrew McKeag looks like a windswept model standing next to a huge fan. Just what you need to wind you down before work on Monday, three great unassuming music acts with excellent comedy thrown in to boot.
article by: Danielle Millea
photos by: Danielle Millea
published: 23/04/2008 14:56