Although the events are unrelated, this evening's show follows a Food & Drink fair in the nearby Rougemont Garden, so by the time I get there I've already over eaten on free samples and had a fair few local ales and ciders. I say this because I'm thinking I'll have no legs left in me for this evening's four and a half hour dance marathon.

The Phoenix, isn't all that full when I arrive, well not indoor but there's an awful lot of people on the outdoor patio, enjoying the longer evenings.

Sunfish take to the stage with a small crowd watching them and Jon Kerry on synths with Sacha Holloway on guitar start to create infectious dance rhythms and the crowd start to get moving. Accompanied by looped visuals and the occasional vocal the music really works well and more and more of the crowd get into the groove. The pair are then joined by Ali Luia and Tor Rubble to add vocal depth to the music. 'Goa' is the track of the night and personally they create the best dance groove of the night, it's a constant building of rhythms and vocal which goes down a storm. 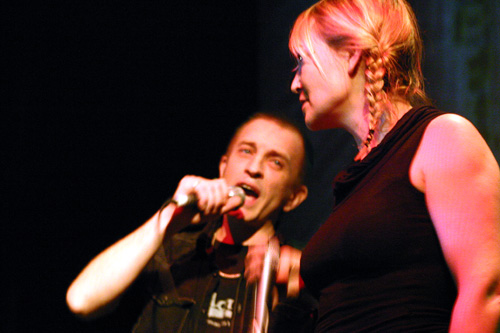 As we wait for System 7, there's a choice of music available laid on by the Future Sound of Exeter organisation, in the main arena Halucinogen spills from the speakers at one point as DJ Ambiessence keeps the anticipation high. Out by the bar there's more decks and there's the Crazy Rabbit DJs on deck-duty.

I was really looking forward to System 7 to take the dancing to another level but I didn't feel they were doing that at first. The set was too ambient, the music had too many slow moments for me, where all that tasting took it's toll on me. The ambient bits had me hankering for guitar legend Steve Hillage's other incarnation some Fish Rising or Green the great playing seemed muted. His partner Miquette Giraudys synths and beats were fantastic but also seemed to fade to single repeated long beats. 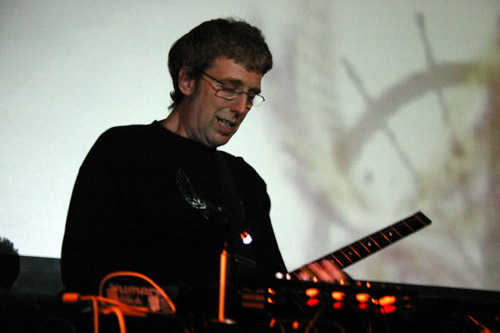 The stuff from System 7's new album 'Phoenix' is a mix of old school and melody, suddenly a sample of Daevid Allen's "I am, we are, you are cra-zy" changes the whole set for me. The beat gets bouncy and the tempo rises, from then on there's familiar pieces of the old infused into the new. The stunning visuals of artist Tezuka Osamu Phoenix paintings come alive are projected behind the pair and the vibe suddenly rescues the whole thing from its shaky or laid back start.

DJ Ambiessence is back with some familiar pumping tunes to keep us lively until Eat Static and out in the bar the pair of The Transistor Paradox playing live are keeping the growing numbers entertained with some crazy loops. Clearly the dreadlocked crowd are only here for the top act, shame they've missed the dance beats of Sunfish and the slow, quick, slow Hillage musical history jewelled music of System 7, fools! 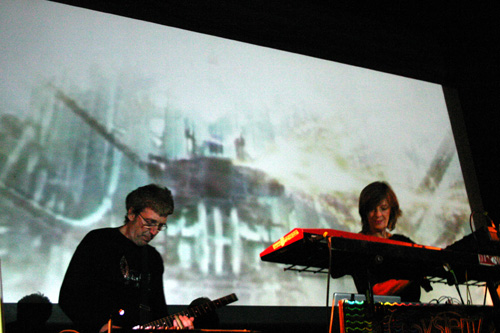 Eat Static are now one, it's only Merv donning the alien mask behind the decks for tonight's show and blimey the alien infused beats are full on! Merv with no Joey to restrain him, is a maniac unleashed, we've had hours of dancing already, and the new crowd are energetic and lively. There's a battering of high speed BPMs and the ambient moments are few and far between, at this point I was reconsidering System 7's moments of melody as pools of oasis in this frenzy. 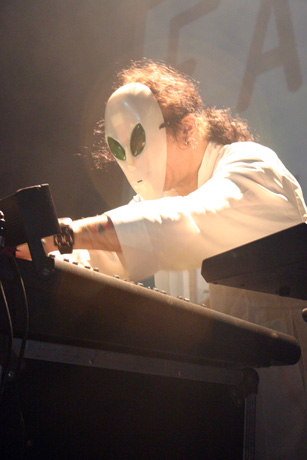 There's little space, apart from the B-movie samples, in the set just banging trance techno, and I have to say the frenzy of the dancing meant I retreated to the bar to hear the Crazy Rabbit DJs more relaxing vibe and have a breather. Clearly those fools who only turned up for Eat Static knew what they were doing, as I watch the sweaty, sticky haired crowd exit from the arena, they all look like they've been abducted, sampled, and had the dance knocked from them. Those that have just been watching look dazed, Merv has blown them away!
article by: Scott Williams
photos by: Karen Williams
published: 21/04/2008 13:45