Mindless Self Indulgence / Far From The Dance

Its always such a pleasure to begin a review with a glowing report of the support act. Far from the Dances performance was original and interesting from the offset. The songs are well composed and mature, combining an abundance of styles from the clear rock influence in the guitar and vocal work to the electo-esque use of sampling and synths, giving an innovative and richly layered sound where every noise becomes a small piece of an immensely satisfying whole. It is a shame, then, that the venues sound system didnt do them justice; there were points in the show where the layers were lost and the sound became jumbled and hard to distinguish. That aside, it was still a truly impressive show for a support act. The end was particularly impressive, seeing Nickoli Digimox (the man in charge of synths) sample a line of lead singer Alec Townsends vocals, and mix it on the spot into an impressive dance tune.

Mindless Self Indulgence launched an attack on the Academys small stage, doing all they could to give their name justice. This is not just referring to the intense electro-punk sound but also to their presence and their honed skills in getting the most out of the crowd. The lead singer Little Jimmy Urine as he likes to be known, is so extravagant and outspoken the interludes between songs were almost as entertaining as the songs themselves. And even when he was singing he made a special effort to be as crude and arrogant as possible, leaping around like a lunatic (dressed like a lunatic as well) stealing snogs from any female crowd surfer he liked the look of. 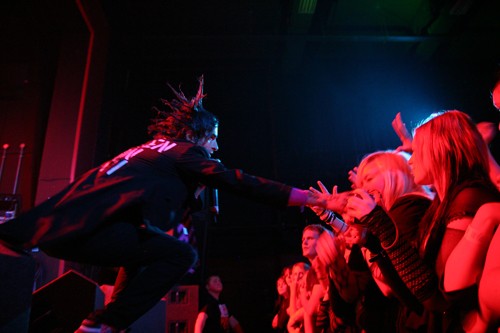 If your attention could be pulled away from Jimmy for a second it was clear that the other members, Steve Righ? on guitar (Yes the question mark is part of his name), Lyn Z on Bass and Kitty on drums were almost equally as fun to watch. Lyn Z stole the show at one point when she climbed into the crowd and stood on someones shoulders, towering over everyone with a smug expression on her face (knowing full well the effect she has on the gawping audience). 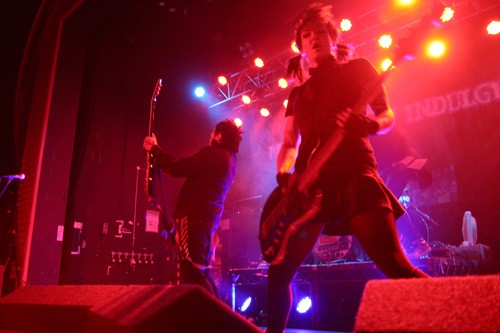 Here I am this far into a review and I havent even commented on the music, which was very good for the most part. The instruments sounded great and Jimmys vocals were spot on, (though quiet at times), switching from rapping to screaming to singing without so much as a single missed note. What was slightly disappointing, though, was the fact that the electronic side to their music wasnt reproduced live. It was there but in the form of (as far as I could tell) pre recorded sounds. After seeing such amazing synth-wizardry from Far from the Dance it was a let down when nothing similar was attempted by the headliners.

Overall the performance was brilliant but there is room for some experimentation in how they go about taking what is an innovative sound on CD to what should be an innovative live musical performance. For entertainment value though, Mindless Self Indulgence do deliver.
article by: Robert Knowles
photos by: Bryn Russell
published: 23/10/2007 23:12