Canadian duo Tegan & Sara are not only sisters, but identical twins born only eight minutes apart. With matching haircuts that would make anyone other than these petite, doe eyed siblings look fairly ridiculous, the duo walk out onto the Manchester Club Academy stage to a fanatical audience screaming like teenagers at a (circa 1994) Take That gig.

The Club Academy basement venue seemed overwhelmingly warm and the combination of its low ceiling and 300 strong capacity crowd was almost enough to give anyone a claustrophobic panic attack. Moving this show to one of the Academys larger venues would have been a much more sensible idea as judging by the enthusiastic state of the audience, theres no doubt they would have been able to sell out a show twice the size. 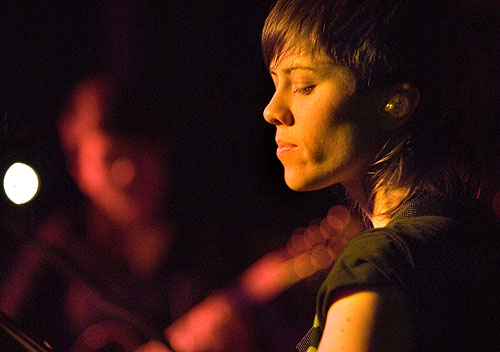 Like current Music Media darling Beth Ditto, both Tegan & Sara are proud lesbians who have simultaneously become atypical sex symbols while achieving cross over appeal to a larger audience purely based on their musical talent. At 26 years of age the sisters have already released five Albums & this Manchester gig is just one night on their six month world tour to promote their latest release The Con.

The reception Tegan & Sara receive seems to leave the Canadian musicians slightly awed as they begin with several songs from their 2004 LP 'So Jealous'. With the rest of the bands set compiled of new material they are overwhelmed by the reaction to each opening chord & several times they declare the Mancunian audience (quite sincerely) as the best theyve ever played for. 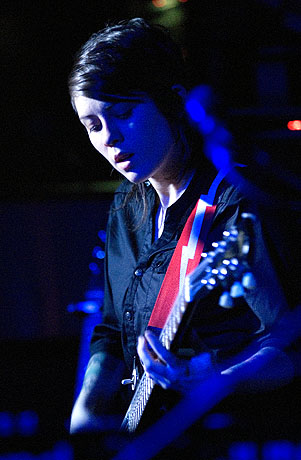 Its mainly younger twin Sara who chats between songs (her favorite colour was white before she was told it wasnt a colour) as Tegan struggles at times with technical problems, but nothing breaks the flow of their performance. The girls constantly swap instruments between their short indie folk pop tracks & their voices blend together as only siblings could. Their voices are rich yet quirky  the harmonies of 80s girl groups like The Bangles & The Go Gos mixed with the high glottal wails of the Yeah Yeah Yeahs Karen O & helium pitch of Little Birdys Katy Steele.

Only when Tegan introduces them between tracks does the trio of musicians making up the rest of their band emerge from the dark recess at the rear of the stage. Despite the girls as singer songwriters reducing them to little more than backing musicians, there seems to be a familial rapport between them. When Tegan proudly announces that they found guitar & keyboard played Ted Gowans busking outside a McDonalds, the boys smile proudly & roll their eyes like surrogate brothers.

The performance concludes as it began with three older tracks  Jealous written by Sara when she almost became a stalker after a breakup, their best & most successful single to date, Walking With A Ghost and 2002s Living Room then a blink & youll miss it break before the three song encore.

With a solid back catalogue, a sickening amount of musical talent & an appealingly honest stage presence, its worth seeing Tegan & Sara live, even if you arent overly familiar with their material. You may, however have trouble getting a ticket.

You Wouldnt Like Me
Where Does the Good Go
Speak Slow
The Con
Like O, Like H
Are You Ten Years Ago
Back In Your Head
Hop A Plane
Dark Come Soon
Burn Your Life Down
Nineteen
Knife Going In
So Jealous
Walking With A Ghost
Living Room