Whilst the sun is blaring outside, more than a few people gather in a small social club in the heart of Leeds student population to raise money for Monaco Rocks. Many bands are lined up to play, but the highlight is a talk from union hero Arthur Skargill, for which you can not move in this stuffy environment.

A fan of Scargills is up after him, the one and only punk poet Attila The Stockbroker. I am only here for these two performances, and many people leave after Scargill finishes with the mic, but the ones that remain are impressed by his wit and clever lyrics. 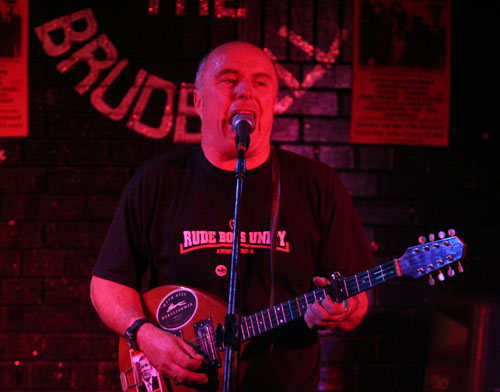 First tune is Guy Fawkes Table, about the time Attila sat at the aforementioned table. Death Of A Salesman proves to be too much for his guitar and the lead conks out. Whilst waiting for a replacement we get the ditty The Russians are Running The DHSS (all these titles are pretty self-explanatory). The politics involved in these songs are to the point, straight from the gut and told in such a humorous way it is easy to remember the message. Just as a good political speaker should be.

Hey Celebrity is about the shite TV reality stars and their fifteen minutes of fame that lasts too long (TV bore/what have you got to be famous for). Attila mentions the fantastic Strummercamp (the first time I found out about him was at this event last year), and plays his tribute to Joe Strummer Comandante Joe. Maggots 1 Maggie 0 is an upbeat track about a bad time for Ms Thatcher, which Attila dedicates to Arthur Scargill, who appears to have left the club. 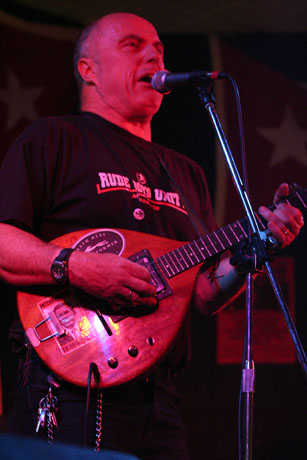 The witty poem of Too Much Pressure, about doctors health warnings, leading onto Attilas love for Brighton FC ("Worst of all for your blood pressure: you support Brighton!") Poison Pensioner is a hilarious dig at his aunt who is helping to look after his mum (Ever thought of space travel, prejudiced cow? / I'd suggest Uranus but you're up there right now).

F and F is a tribute to Eminem and his rapping for twelve-year-olds, Supermodel, though some will state it is sexist, is not offensive in the slightest unless you are a supermodel who complies with capitalism (which they all do). The best line is "So thin and yet...so thick". Thats not just my view, the people in attendance love it too. 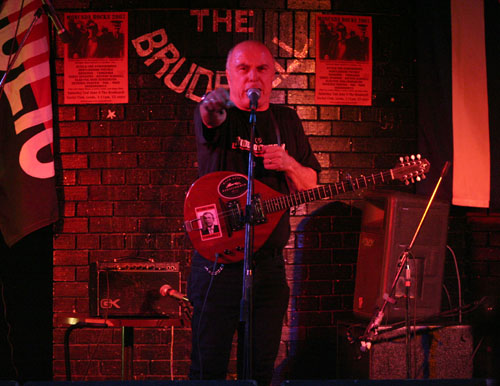 The winner of the longest titled poem goes to... Oh For The Days When SPAM Was Just A Monty Python Sketch, a way of using all the ridiculous things sent through Spam emails, like Viagra, rubber (just rubber) and free Coldplay MP3s. To end the madness Attila adds this fact my website is recommended / as one of the top fifty stockbroking sites / on many search engines.

We finish with a request for Baghdad Scar and a rant about Coca Cola (I feel really bad, as I have just finished a pint of the stuff. What can a driver do? Or wait, I think it was actually Pepsi. I am safe). Spirit Of The Age is Attilas delve into his future, counting up the years in a tasteful rap (53? Top of the tree! / Red rebel rhymes and rapping rebel poetry).

I am a big fan of Attila The Stockbroker; the whole speak your mind thing a lot of people can do, but not to make an impact like this guy. And hes a punk! All good in my book. And any non-believers, well see after his three sets at Glastonbury.

Guy Fawkes Table
Death Of A Salesman
The Russians Are Running The DHSS
Hey Celebrity
Comandante Joe
Maggots 1, Maggie 0
Too Much Pressure
Poison Pensioner
F & F
Supermodel
Oh For The Days When SPAM Was Just A Monty Python Sketch
Baghdad Scar
Spirit Of The Age