Once, when on the island of Santorini, I got chatting to this bloke, a professional drummer no less, who told me how his favourite album of the year, possibly the last decade, was the latest offering by Nickleback. Spotting the incredulity on my face, he proceeded to explain in great depth how it was a magnificent piece of work because you could hear every note as clean as a whistle. It was so beautifully produced, he insisted, the only way to listen to it was through headphones so one could hear the precision of every ting of a cymbal or twang of a string. He was, to put it mildly, talking bollocks. However, as a musician he was looking at it from a musos point of view, somehow ignoring that the precise notes, when put together in some sort of tune, were pants.

So why am I thinking of this bloke now? Well partly because in introducing experimental indie outfit Cold War Kids, XFMs John Kennedy over-egged the pudding by suggesting that album Robbers and Cowards was his favourite album of the year, possibly the last decade, but also because Im not sure just how experimental or improvised this gig is. Every out-of-place sounding plink of the piano or violent shake of the maraca may appear random, but you go and see them tonight, and I bet they are in the same places. This performance is very polished indeed and there is so much instrumentation contained therein that it is a musos dream, so it is just as well that these are the only similarities. Nickleback turned out to be derivative grungy bores of course. Cold War Kids are regularly innovative, sometimes exciting, but always chock full of passion. 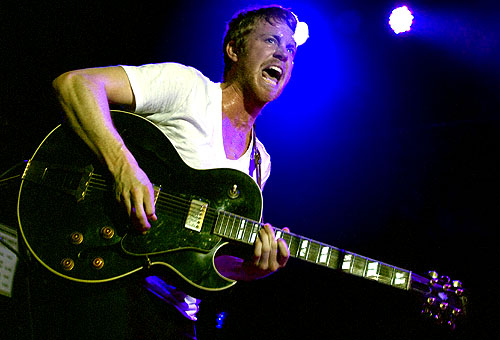 Singer Nathan Willett appears to be a reluctant frontman, his keyboard facing stage left for opening We Used to Vacation rather than facing the crowd and his arm emphasising his words in a less-than-convincing manner when he is stood up stage front. Nevertheless, front man he must be as his voice is extraordinarily powerful, constantly seeming as though it is at its absolute limit, before finding more. Mainly it is the voice that makes the tune whilst guitarist Johnnie Russell and bassist-in-a-terrible-hat Matt Maust buzz around the stage like sprinters with no sense of direction, both contributing to a wall of noise with drummer Matt Aveiro on the likes of Rubidoux whilst melding jazz on God, Make Up Your Mind and chain gang blues on Saint John.

The songs are poems or short stories, some of childhood memories, some of disparate love and others with cynical comment on modern living. Each has its own drama, always with a shift in tempo or a pause for short contemplation before powerfully re-launching the song. Its terribly earnest of course  the only time a smile is raised is in irony when Willett, darting from piano to centre  missed grabbing the microphone and therefore slipped a line of Februarys superb single Hang Me Out To Dry. 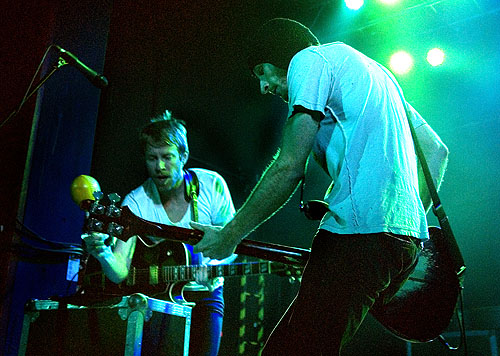 They are not too earnest for an encore though, Pregnant getting the loudest cheer of the night. Prior to this the audience has been fairly muted; captivated by the verve the band creates on stage. Its rare to see a band put so much into a show these days  they clearly adore the songs they play - and despite the frenzied movement they were note perfect, even the supposed haphazard ones. My friend from Santorini would have approved.
article by: Jonathan Haggart
photos by: Kirsty Umback
published: 26/04/2007 22:23