The Punk movement may have metastasized into EMO, but theres no cashing in on adolescent angst for these rockabillies. Goldblades show is a riotous energetic celebration of music; a bunch of guys old enough to know better, evangelising about the Power of Rock n Roll.

The band are definitely preaching to the converted - a crowd with their fists in the air and grins on their faces. An eclectic mix of people - veteran punk fans (Stiff Little Fingers tees stretched over middle age stomachs and ladies with Siouxsie Sioux haircuts); women dressed in florals that look like your Great Aunt, moody teenage first timers and bellowing lager louts. Really, the atmosphere is more rowdy family reunion than typical rock show. 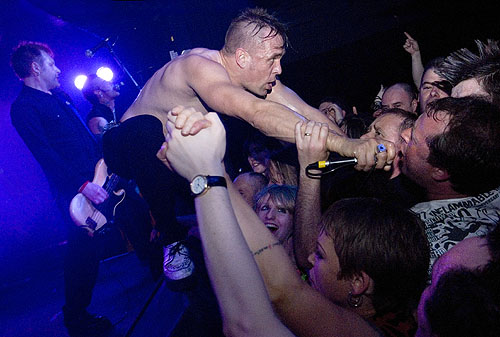 A Friar Tuck-a-like holds aloft written placards containing song titles that get the fans whooping  Mutiny, Jukebox Generation, Psycho. Lead singer John Robb drips sweat from his head and sleek shirtless torso. Pete G.O.R.G.E.O.U.S. machine guns the crowd with his Les Paul Electric Guitar; Johnny Skullknuckles sports both an impressive quiff and razor sharp sideburns. The stage is decorated with pirate flags and faux fur covered amps. Hands are shaken, cheeks are kissed and half the audience is dancing on the stage with the band by the encore.

When hes not running on the spot  arms pumping, Robb squats at the stage edge passing the mic into the pit. Everyone knows every word by heart. Robbs eyes bulge and you feel his adrenalin. Maybe its the home crowd, maybe they always play with such gusto, but they seem so excited to be performing at Academy 3, it feels like Goldblade have until tonight been banned from playing. 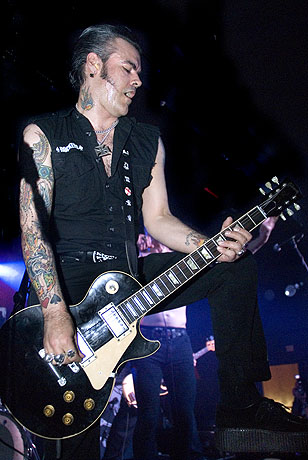 The music is hardcore but with a few cheeky references thrown in. An Angus Young riff in single AC/DC, a bit of sea shanty here and pulsating surf guitar there. Lyrics are political but good humoured. Che Guevara, Caesar, Simon Le Bon... no-one is safe from getting a mention. For all the talk of riots and revolution, the atmosphere is electric but strangely calm. Robb apologises for getting snot on a girl thats stuck front row centre as he proffers a bandana to wipe her down. No-one is pushy or aggressive and even the mosh pit feels like an OK place to be. 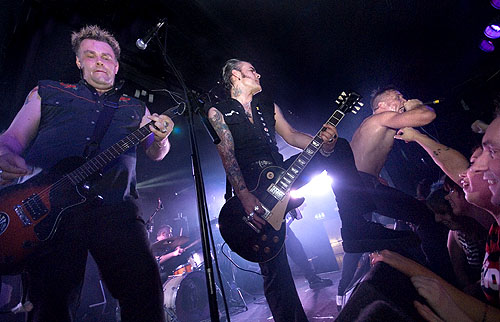 The bands songs are a kick in the pants  the thumping music an assault on your ears. The gig may be a sell-out, but the band certainly isnt. These guys arent in it for the money - theyre from gritty Manchester, not sunny California. Goldblade are out there doing what they love. And if you dont like it, the title of their encore says it all  Kiss My Ass.
article by: Kirsty Umback
photos by: Kirsty Umback
published: 18/04/2007 01:09