These days, Sir Tom Jones may still have to dodge the odd pair of control top granny pants being flung on the stage when he performs, but it seems that the Gossips front-woman Beth Ditto is the rock star currently receiving his 1960s quota of flying underwear.

The Arkansas native and her merry band of musicians played a sold out show at the Manchester Academy 2 on a busy Sunday night for the venue (Amy Winehouse was simultaneously warbling away at Academy 1.) and the crowd did not hold back with their appreciation, both vocally & with their lingerie. 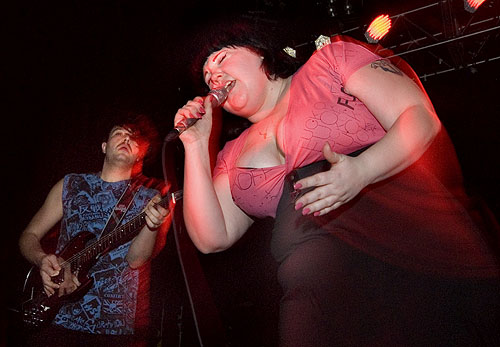 Because of her size and sexual preference, Ditto has inadvertently been hailed as a new feminist icon by the media, but with huge stage presence (no, thats not a polite euphemism for fat), an amazing set of pipes and a flirtatious personality, it seems that the vocalist is happy to ignore the labels and just get on with entertaining.

The first thing that struck me about Beth is that shes actually quite tiny. Stomping around the Academy stage in bunion inducing stilettos, masses of liquid eye liner and a tight mini dress, she looked like a character straight out of a John Waters film. The media may focus on Dittos weight and one has to wonder if being labelled number one on NMEs cool list for 2006 is actually a good thing for a vocalists career, but once this woman starts to sing, all of these things become irrelevant. This woman is a true pop star with charisma to burn and after several years of sullen indie guitar bands, its great to see a group that is so obviously enjoying every minute they perform.

Guitarist Brace Paine flip flops backwards and forwards from the waist like hes on a spring and the trio is completed by Hannah Blile, who replaced the bands original Drummer in 2003. Really though, this is the Beth Ditto show and the rest of the group know it, keeping to the far back and side of the stage in order to give her room to strut. 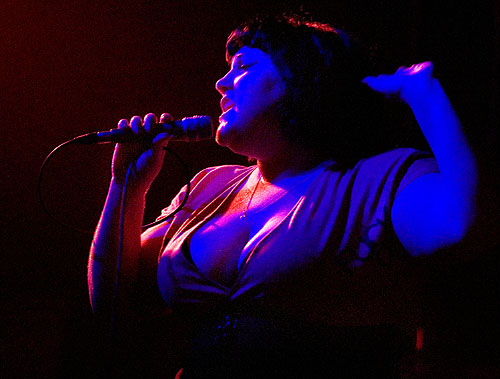 The Gossip claim to be influenced by punk, but their music is also a genre stretching fusion of indie pop, disco, gospel, blues and funk  all designed to get the crowd moving. Sure some of their songs arent on par with their singles and their beat can at times become a bit samey, but with tracks like Jealous Girl and the newly re-released single Standing In The Way Of Control being sung with so much emotion and power, all is soon forgiven. Coming back on for the encore to do an a cappella version of Tina Turners Whats Love Got To Do With It, you just want to jump the stage, give Beth a big hug, rest your head against her ample bosom and know that everything is going to be alright.

Perhaps its because of her upbringing in Middle America, but Ditto doesnt seem to have become jaded by success and heres hoping her enthusiasm never fades. Talent aside, its her personality that shines on stage  shes sexy, shes sassy and a little bit naughty and the audience member who yelled out Beth, youre well fit I think spoke for everyone there. See them live. Soon.
article by: Kirsty Umback
photos by: Kirsty Umback
published: 27/02/2007 15:15