Mr Hudson and the Library are unusual to say the least. Dressed like a 1930s detective Mr Hudson and his crew walked on stage, having apparently gathered a loyal fan base in his home town of Birmingham. The music itself was interesting. A kind of acoustic rock and hip hop is the only relatively sane, yet wholly inadequate, definition anyone seems able to muster. The piano and the steel drum lead the ensemble with hard hitting Plinks and Plonks while the drums act as a simple yet powerful driving force behind it. 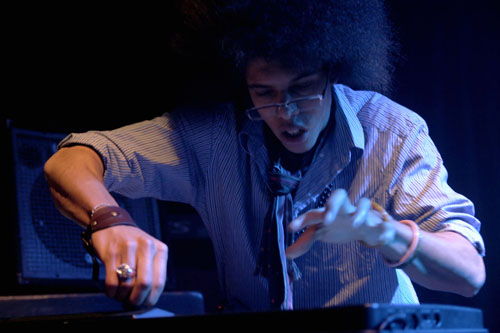 The result of such a competent mix of genres was a very impressed crowd, who danced and sang, reacting most potently to Too Late Too Late and One Specific Thing, both of which are due to be released on the 5th of May on their studio album Tale of Two Cities, the name being not only a reference to Charles Dickens but also, perhaps, an insight into Mr Hudsons (the man) life growing up in Birmingham and later living in London.

As well as being an interesting listen, The Library were also very aesthetically pleasing due to their retro attire and the very fact that there was a steel drum on stage had a lasting novelty. The band members themselves were loving it. The pianist in particular (Torville Jones) was a joy to watch, playing relatively simple chord based music, something that he could no doubt play with his eyes closed, but nevertheless putting every ounce of energy into it.

Mr Hudson and the Library were an intriguing and energetic watch; A perfect start to the evening.

A striking mix of culture is perhaps the appealing thing about Amy Winehouse. Her dresses and long silk gloves as well as the classy bluesy music she performs suggest class and high culture. What instantly sets her apart, however, is the multitude of tattoos inked generously over her body. Her lyrical content is also at odds with the ideal her sound initially puts across, singing in parts about rehab and sometimes questioning what all this fuckery is. 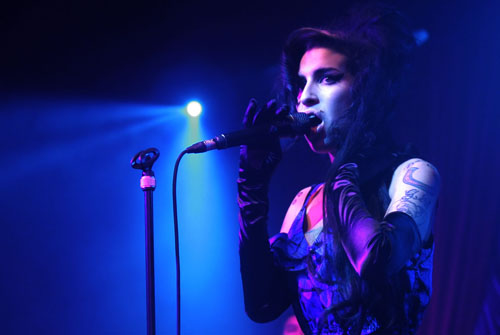 This innovative mix of image is not reflective in Amy Winehouses live act however, which wasnt at all as interesting. One of the most striking things about the whole experience was the fact that despite the applause her loyal fans were giving, Amy Winehouse did not seem at all interested in being there. This is probably a part of her image as a classy girl with an attitude but if it was the act didnt wash. In complete contrast the backing singers were the light of the show. They danced and sang with energy and looked like a coloured version of the blues brothers.

Musically the band is talented and played well, not spectacularly, but well. The crowd, on the whole, seemed to be enjoying themselves, but a large group of them seemed disinterested and stood at the back drinking and talking loudly. This added to a disappointing night overall as the band obviously couldnt captivate the whole of the audiences attention for more that quarter of an hour which is somewhat underwhelming for a sell out band.

What did impress was the beautiful stage set, backed with curtains and furnished with ornate lamps, which did go so far in creating an appropriate atmosphere for the evening. The atmosphere was lost unfortunately in the seemingly disinterested crowd and the unenthusiastic performer.
article by: Robert Knowles
photos by: Bryn Russell
published: 24/02/2007 17:29

more about Mr Hudson and the Library
more about Amy Winehouse
more about O2 Academy (1, 2, and 3), Birmingham