Manchester is all a bustle tonight, with myriad gig-going opportunities for the locals to enjoy. At the MEN Arena, The Killers will be doing their best Meatloaf impression, whilst Babyshambles are at the Apollo and The Holloways play next door at the Academy 3. By far the hottest ticket in town though, even taking into account Matt Williss show at Academy 2, is that for the NME Indie Rave tour which is turning the Academy 1 into its disused warehouse for the evening.

Now you can criticise the NME for many things...dont get me startedbut not for the quality of its tours. The last 3 years have included Franz Ferdinand, Kaiser Chiefs, The Killers and Arctic Monkeys, all of whom are now in giddy stratospheres. So who will be the band to make the big break from this show?

The early betting is on Klaxons of course. Its day-glo-a-go-go in here as we see glo-stick waistcoats, spectacles, crowns, you name it. One wag has even stuck one through his flies and given himself a glo-stick penis...hilarious!

New Young Pony Club are first up and they are a bit of a surprise. Prior to tonight Id been seduced by the electronica of marvellous single Ice Cream but they start the evening with a guitar riff from the draw marked rock. And in truth its pretty unremarkable fare. Whilst singer Ty Bulmer has the energy and attitude ("make like its 11:30, not 7:30") the songs let her down. The aforementioned Ice Cream is the clear highlight in a disappointing 5 song set. There was no raving here.

That said, there were never likely to be any shapes thrown by your writer. Generally, Im not much of a dancer. To explain, picture Romeo Magic Number jumping up and down with wild abandon. Its not right, it is? Well, thats me folks. Therefore, I feel I provide the ultimate test to any indie rave credentials these bands claim to have. 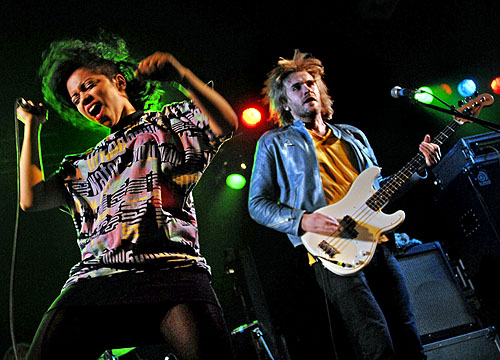 The Sunshine Underground certainly have a decent go at getting me grooving though. They open with Put You In Your Place, the single The Rapture should have come back with, and the pace is relentless throughout. Craig Wellingtons voice is strained from song one/line one, backed by a frenetic indie dance throbbing bass, jagged guitar, echoed vox and swirly noises.

I had been warned off their album 'Raise The Alarm by a sage theres only so much cowbell a man can take, and there is even a solo on the albums title track  their last tune this eve. It may only have been six songs, but they have made their impression. My feet were moving from ball to toes and knees were bending. I may even have dipped a shoulder during the frenzied Commercial Breakdown. Well done them. 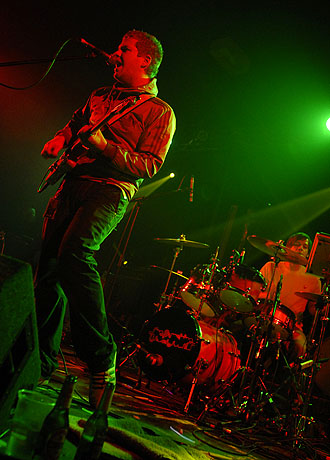 CSS are late. This is probably due to the road crew having to lay a carpet before they come on. Or maybe its that the 40 minute slot they are allocated is longer than their 34 minute long album. When they finally arrive, the 5 girls are wearing burqa hoods which are swiftly removed after a primal-screamed hello.

The crowd seem delighted that the first note they hear is that of 2 Unlimiteds No Limits which does meld seamlessly with CSS Suxxx. Its immediately apparent what the carpet is for, as Lovefoxx is bounding, shimmying and leaping - any number of moves which would see her on her backside on a slippery floor.

The beat is irresistible throughout, and Alalala and Off The Hook provoke the feet to begin to move fully off the floor. By the time we get to Lets Make Love... a full scale frug is taking place - Check me out. Its impossible not to though, as CSS are a proper good time band, songs full of drinking, dancing and shagging. Its a hedonistic take on life, but why the hell not? 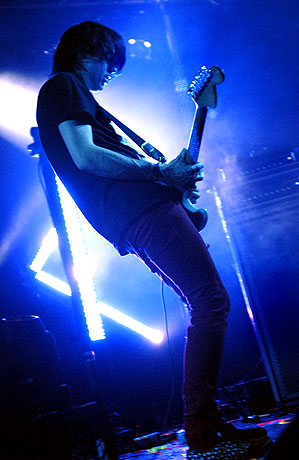 The only shape thrown during Klaxons though was the raised hand scratching the head, for this was a real Curates Egg of a performance. When the bass is pumping and turning your legs to jelly, particularly on Atlantis to Interzone and Gravitys Rainbow, they are worth every plaudit thrown at them. But you cannot disguise that the falsetto vocals are weak and weedy, and on the less shouty and frantic songs, of which Golden Skans is the prime example, it just doesnt work for me.

But then, what the f*ck do I know? - the kids lap it up from start to finish. This band is about more than their music, they could be the forerunners of a movement that will engross identity-seeking youths, inspiring and opening doors for more innovative and experimental bands. Im all for that, but with a parental word of warning. All this day-glo and 80 revivalist fashion will inevitably take us to the rebirth of the shell suit  surely nobody wants that?
article by: Jonathan Haggart
photos by: Kirsty Umback
published: 20/02/2007 18:32