With their eponymous debut release in 2005, Clap Your Hands Say Yeah garnered instant praise and commercial success in the USA, mostly through the power of internet blogs and music websites. Having made a self produced and independently released LP, the band had to repress their CD due to demand, a fact that can only have added to their indie cache in a world where the hype surrounding so called web driven success stories usually end up looking like manipulated PR stunts (stand up Sandi Thom). In this case though, the acclaim was well deserved.

Frontman Alec Ounsworth is a native of Philadelphia while the rest of CYHSY hail from Brooklyn, New York. There is something so distinctively American about this group and yet the current bands to which they are most often compared such as Arcade Fire and Wolf Parade have all appeared from the burgeoning Canadian music scene. 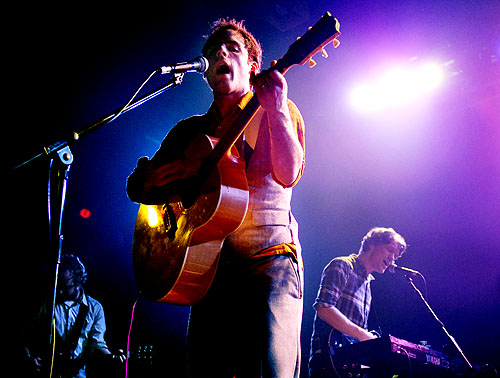 Ounsworth is a distinctive vocal talent, whose sound is hard to describe without using words that sound terribly negative. The only description that comes to mind is that his singing style comes across as a high pitched nasal whine; think David Byrne circa Talking Heads or Televisions Tom Verlaine. These vocals are then layered over crisp, uplifting melodies that make CYHSY truly stand out from the Indie pack.

The groups current UK tour comes on the back of the January release of their second album but surprisingly, not many songs from Some Loud Thunder feature on the bands set list when they play the Manchester Academy. Apparently the band are known for performing songs from a large repertoire of unrecorded tracks and this is proven on the night with a third of the songs seeming to be material the band has never released. 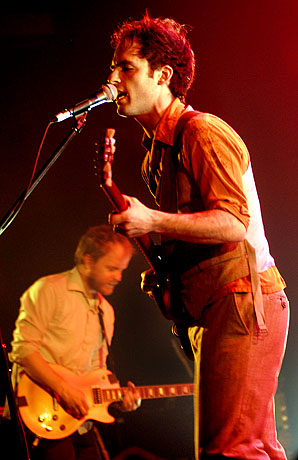 Five tracks from the bands debut make an appearance on the set list including the opening number, Gimmie Some Salt and the intriguingly titled Upon This Tidal Wave Of Blood. Throughout the concert, band members Robbie Guertin and Lee Sargent prove their musical talents by constantly swapping between Guitar and Keyboard, while Bass player Tyler Sergeant seems to spend most of the show playing in the near dark. Ounsworth often plays his guitar from a squatting position before straightening his lanky frame and returning to the microphone for more adenoidal howling.

Clap Your Hands Say Yeah are a slick operation, but they arent there to win you over. Thankfully on this occasion, the atypically mature Academy One crowd doesnt seem to mind not receiving the ubiquitous hype up that most bands give their fans and seem content to just stand back, nod their heads and enjoy the music.