Indie  When Jack White pens ads for Coca Cola and Muse sell out Wembley Stadium in 45 minutes, does the word still have any meaning in the music industry?

These days it seems that almost every group not put together on reality TV is given the Indie Label and for bands coming up with a slightly different sound (usually by just mixing a new combination of different musical genres & influences) comes the tag of being the new saviours of Rock & Roll.

NME darlings Larrikin Love are one of these bands - influenced by a varied combination of musical styles, their brand of British Indie contains elements of punk/reggae/folk.really, almost any genre of music seems to make an appearance during their current live set, and yet in structure their songs sound yawn inducingly banal. 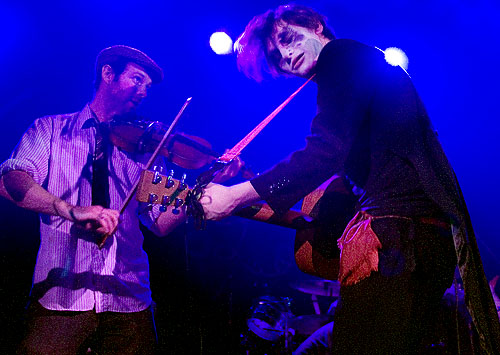 The London based band played Manchester Academy 2 on Thursday night to a sold out crowd that, I should add at this point, all seemed to enjoy the show immensely. Im happy to admit that Im obviously missing the point of Larrikin Love and what makes them so appealing, as its been a long time since Ive seen such a large group of devoted fans (and by that I mean everyone in the venue) get so excited and involved in a musical performance.

By no means are any members of the group bad performers. All of the band, including the lead singer, are passionate and proficient musicians that seem to feed off the energy of their audience. On a stage dotted with wildlife (fake shark head in front, taxidermy eagles and goats gracing the speaker stacks), vocalist Edward Larrikin - dressed in coattails and black and white makeup lead his group through a series of tunes including crowd favourites Six Queens, On Sussex Downs and Cucumber and all band members (including their Roadie) spent the entire show hopping, stamping and spinning around the stage as the audience sang along word for word - at times so loudly they threatened to drown out the performance. 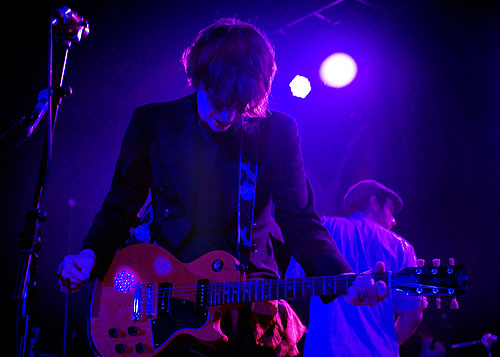 Larrikin Love is a band that comes with all the whistles and bells (and I mean that literally), but with their Libertines lite lyrics and every song they played live following the same format - slow, dramatic song openings that built to a crescendo before the upbeat tempo kicked in - to me they just came across as a group of upper middle class adolescents looking for something, but finding nothing to rebel against.

Tracks such as Well, Love Does Furnish a Life offered something a bit different, with a strong reggae influence on the live version making it reminiscent of something by The Police and with a guest Fiddler in residence, songs Edwould and Happy as Annie were given a fairly charming Folk/Bluegrass feel, but in the end, all the juggling, face paint and cow bell ringing in the world could not persuade me that this Indie band was playing anything I hadnt heard a hundred times before.
article by: Kirsty Umback
photos by: Kirsty Umback
published: 04/02/2007 11:59