The well loved locals Ocean Colour Scene (OCS) exploded with The Riverboat Song and took away any leg pains the fans may have experienced from the long wait, replacing them with eye pains from the onslaught of bright lights. This was a wise choice for opener because of its infamy and the hard hitting rock n roll character, sending the crowd into a frenzy of drunken dancing. 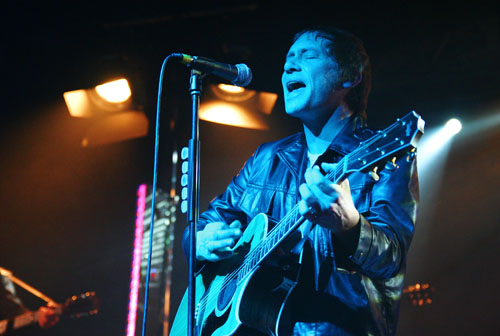 The clarity of sound was impressive from the start, the quality not faltering in quieter songs later on in the gig, and the vocals audible even when some songs reached intense crescendos sometimes layering piano, guitars, drums and percussion. Experience was clearly on the Mosley boys side and they were confident enough to record the show and sell it straight after the show. Musically tight and talented, as having an interesting set up of instruments made them a pleasure to listen to. To watch, however

A slightly artificial feel was given to the show by the arrangement of the band on stage. The drums were on the highest podium at back centre, and on either side the other band members were on podiums of decreasing height, the further from the middle they got. Only the lead singer, Simon Fowler, was on the actual stage floor in the middle of his band mates, which gave him far too much emphasis, especially when the lead guitarist Steve Cradock was much more interesting to watch, kicking enthusiastically to coincide with accented chords or kick-ins. It also meant that the other band members couldnt move around very much, which meant most of them just stood there looking slightly awkward. Again, though, the guitarists antics made up for this especially during his epic, and technically brilliant solos, which peppered the songs almost to the point of excess. 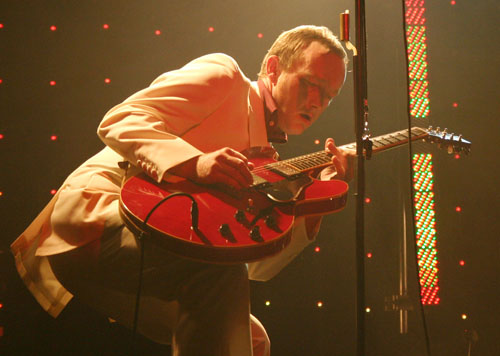 A band as popular as OCS must have a few pennies hidden away to spend on fancy lights and lasers, and they certainly didnt skimp on this show, despite the humble venue. The lighting was expertly controlled and anticipated the atmosphere of songs well, changing appropriately between intense and ambient lighting depending on the song. There was also a backdrop of coloured spots of light which flashed and changed colour, and these are what, to an extent, ruined the lighting. During some songs, one in particular, the amalgamation of too many colours coming from too many different places made Ocean Colour Scene look more like Vomit Colour Scene.

The set list was well chosen, and the reactions from the fans made this clear. An adequate amount of old classics were spread across the show, the most famous of which were played at the end much to the crowds pleasure. The show mainly focused around the newer material from the OCS as yet unreleased new album. These tracks were lapped up with an open mind and seemed to make a good impression. The band lost the attention of the crowd during one of the slower songs Drive Away, the verse of which couldnt really be heard over the hubbub of conversation.

I would now like to express my surprise at my enjoyment of the show, having not been a big fan of them in the past, with a small anecdote. During the Cradle of Filth concert at Wolverhampton last year Danny Filth, in his usual belligerent manner, convinced his audience to shout obscenities at OCS who were apparently playing nearby. If I had been to see OCS before this, I would have been much more reluctant to oblige to the scary mans orders.
article by: Robert Knowles
photos by: Bryn Russell
published: 20/12/2006 10:24